One of the world’s largest oil producers is running out of gasoline.

The irony here is that the currency crisis leading to gas shortages is being caused in part by plummeting oil prices.

How does that happen?

The basic explanation is that because Nigeria expected the price of oil to be higher when created its budget, which is dependent on oil revenue, it’s having to print more money to meet its obligations. That causes its currency to slump, which means it costs more money to import goods.

So exporting cheaper crude means importing more expensive gas. The problems with gas are also amplified by the fact that the Nigerian government heavily subsidizes gasoline, and hasn’t been making its subsidy payments on time.

The situation on the ground is awful

As queues of double-parked cars stretch outside filling stations in the capital Abuja, empty tanks elsewhere are forcing consumers onto the black market just weeks before presidential elections on March 28 in Africa’s biggest economy. 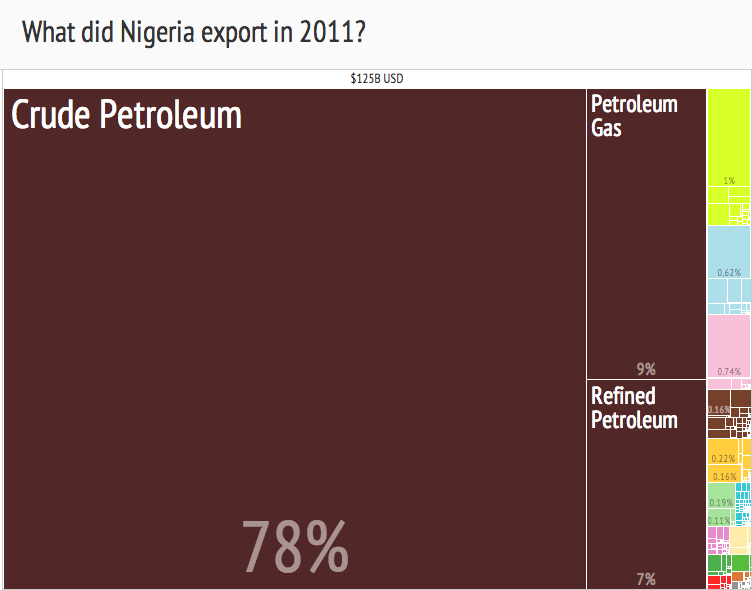 This treemap shows Nigerian exports of petroleum products in 2011. Most of what the country produces is crude, rather than refined, products.

“I have spent 12 hours here,” taxi driver Bartholomew Odey Akpa told Reuters on Monday. “I work at the airport as a car hire … and there is no fuel for me to go.”

Nigeria exports around two million barrels per day of crude oil but is almost wholly reliant on imports for the 40 million litres per day of gasoline it consumes.

The picture is an unwelcome one for President Goodluck Jonathan, who faces former military leader Muhammadu Buhari in what is expected to be the tightest election battle since the end of military rule in 1999.

Gasoline is heavily subsidized by the government via the Petroleum Products Pricing Regulatory Agency (PPPRA), and Jonathan’s own efforts to scrap them in early 2012 caused riots.

Credit problems due to erratic subsidy payments, already a burden for importers, have been magnified by the plunge in global oil prices and the country’s currency, leading to the buying freeze.

“It’s a mess for financing … I don’t think there is enough product on the way to fill up the tanks,” a trader said to Reuters. 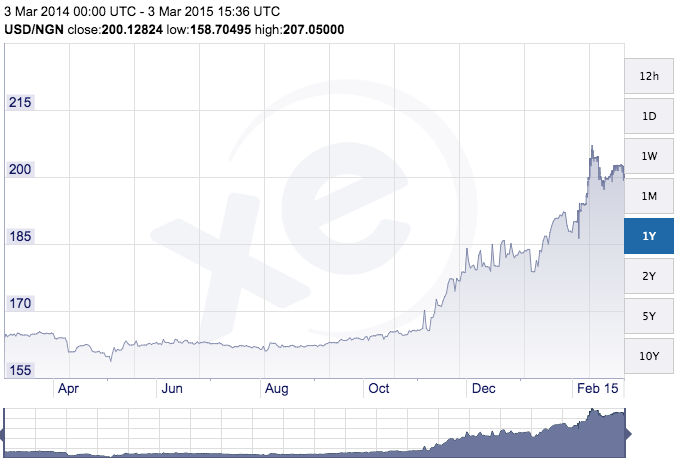 Nigeria’s naira hit a record low of 206.60 to the dollar in February, down 20 per cent since its devaluation in November, and the central bank scrapped biweekly currency auctions in February to protect its haemorrhaging foreign reserves.

The move left importers with no choice but to pay higher interbank rates, further complicating financing.

“Marketers who handle about 50 per cent of the market are not importing, as the banks are not opening letters of credit for them,” an industry source said.

A spokesman for the finance ministry said the minister met with marketers last week and agreed to further subsidy payments.

MOMAN’s Olawore said the situation should right itself soon as an subsidy allotment was expected on Tuesday.

“We were told at a meeting on Friday with the central bank and other banks that the letters of credit would be reopened now that a payment was promised,” Olawore said. Further subsidy payments are expected to be made throughout March.

The finance ministry last paid importers around 345 billion naira in December, he said, with about 265 billion naira left including cover for foreign exchange charges and interest.

Even some of those with access to financing were running down stocks, fearing that a missed payment for just one cargo could push them into bankruptcy.

This has put the burden on crude-for-products contract holders Sahara, Aiteo and state trader Duke Oil, operating through another state agency, which usually only import half of the country’s fuel.

Fear of chaos in both subsidy payments and at import terminals after the elections was also a reason why shipments dried up close to the original poll date of Feb. 14. A similar move is happening again.

“There is now a huge drive to get product there before the election,” one trader said. “It’s all going through the PPMC.”

Extracted in full from Business Insider.