It’s time to pay on time

The principal of every small and family-owned business in Australia will tell you that cashflow is crucial to their survival – and being paid on time is an essential element of managing cashflow.

When small and medium-sized businesses are not paid on time, they are put under significant financial pressure and either must draw on the personal reserves of the business owner to pay wages and keep the doors open or are required to borrow money on a short-term basis.

In fact, the problem has become so bad that we now live in a bizarre world where the Banking system actually offers products designed to cover the gap created by businesses not being paid on time (e.g. invoice discounting products) – bizarre in the sense that small businesses owed money by their big business customers are actually paying interest to allow their big business customers to pay late.

In 2017, after hearing numerous complaints from Australian small and medium sized business owners about late payments, the Australian Small Business and Family Enterprise Ombudsman (ASFBEO) conducted a review of late payment behaviours and practices in Australia.

The subsequent study report was publicly released in April 2017 (https://www.asbfeo.gov.au/sites/default/files/ASBFEO_Payment_Times_and_Practices%20Inquiry_Report.pdf) and strongly confirmed previously stated concerns by advocates such as the Council of Small Business Organisations of Australia (COSBOA) and others, that on time payment practices in Australia were very poor.

“The Ombudsman, Kate Carnell, observed that Australia was the worst in the world in terms of time taken by big business to pay small and family owned businesses for the supply of goods and services”, said ACAPMA CEO Mark McKenzie

Subsequent work by COSBOA and the Business Council of Australia (BCA) saw the BCA launch a Voluntary Supplier Code in 2017 with the signatories to this Code committing to pay all correctly rendered invoices within 30 Days (The details of the BCA’s Code, and the names of all participating businesses can be found at http://www.bca.com.au/policy-agenda/australian-supplier-payment-code/view-all-related-publications)

Shortly after the release of the Code, a number of big businesses signed onto the BCA’s Code. In addition, businesses such as Coles introduced their own policies that bettered the times outlined in the BCA Code.

“The leadership of the BCA on this issue has been magnificent but the problem is that only 70 of the more than 3000 businesses with turnover of more than $100M, have signed onto the BCA Code to date”, said Mark

Having closely monitored this issue for some time, the Morrison Government announced this week that it will now act to address the issue of late payments in Australia.

Appropriately, given the leadership shown by the BCA, the announcement was made at the BCA’s 2018 Annual dinner held in Sydney on Wednesday 21 November 2018. The Dinner was attended by numerous Cabinet Ministers, including the Small and Family Business Minister (the Hon. Michaelia Cash) who has been working behind the scenes on this issue since inheriting the small business portfolio just a few months ago.

The dinner was also attended by the CEO of COSBOA (Mr Peter Strong) and the Chair of the COSBOA Board (Mark McKenzie) who were hosted by the BCA, in recognition of a growing collaboration between BCA and COSBOA on issues of mutual interest for all businesses in Australia.

In addition, the Prime Minister announced that the Australian Government would seek to increase the proportion of government contracts (for contracts up to $20M) awarded to small business- from the current 10% to 35% from 1 July 2019.

“We have listened, and we heard loud and clear from small business owners around Australia, and we are taking action to ensure small business is not be used as a bank”, the Prime Minister said. 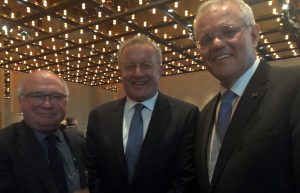 The CEO of the Council of Small Business Organisations of Australia warmly welcomed the Prime Minister’s announcement.

“These measures will significantly increase the pressure on large organisations (both corporate and government) to pay invoices on time. And that is great news for Australia’s 2M small business owners and the 4.5M other Australians that they employ”, said Peter Strong.

Meanwhile, the Kate Carnell and her team at the ASFBEO have embarked on the 2018 Review of Late Payment times in Australia and are encouraging small and family owned business to report their experiences.

The work of the Ombudsman in this area has been instrumental in getting string action on late payment practices in this country and it is vital that we support their continued efforts on this issue by participating in this next review, said ACAPMA CEO Mark McKenzie

ACAPMA members are strongly encouraged to participate in the 2018 Review by visiting https://www.asbfeo.gov.au/payment-times and completing the 5-minute survey.