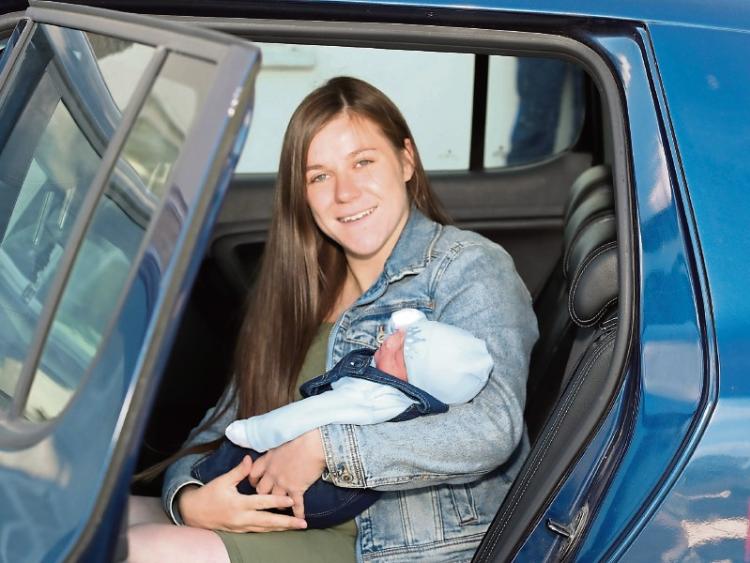 Bundle of joy: Dennika Ward with baby Michael Daithi who she gave birth to in the car at Elm Court Service Station in Ballyneety PICTURE: Keith Wiseman

DENNIKA Ward’s parents thought she was being a drama queen when she screamed, “The baby is coming!”

Michael Daithi O’Flaherty was born in the forecourt of Elm Court Service Station and Post Office in Ballyneety.

Instead of letters, a beautiful baby boy was delivered.

Dennika, her partner Michael, and mum and dad Antoinette and Stephen were driving to the University Maternity Hospital at the time.

“I was saying to them, ‘He is coming, I can feel it’. That’s when they stopped the car. We happened to be in Ballyneety and the petrol station was right there.

“I was in the back seat. My mum got out, opened my door and his head was there. She just caught him. It was so mad. Anything could have gone wrong. She put him onto my chest and we drove straight to the maternity,” said Dennika, aged 24, from Kilmallock.

Mum and baby are doing very well. Michael Daithi weighed in at a very healthy 6lbs 15oz on Monday of last week.

A Monday that Dennika will never forget had started around 6.30am when she went down for breakfast.

“I was getting kind of pressure over a couple of days. Then that morning I knew it was contractions and I started timing them. With my first child, Willow, it took me all day so I said I’ll go up, have a shower and get things sorted for Willow before I do go in. All of a sudden it all just started coming so fast. I was like, ‘Lads, we need to go right now!’” smiled Dennika.

She said her mother was there when she was going into labour with Willow, aged 20 months.

“Mam said, ‘You were so dramatic the first time we just thought you were being the same this time’. They thought it was just a case of driving in and getting me to the hospital. They didn’t believe me. They thought I was overreacting. Not one of them believed me until it was actually happening and it was the heat of the moment,” laughed Dennika.

Dad, Stephen was driving the Skoda while partner Michael was in the back with her. There was no calming antenatal breathing and careful timing of contractions like you see in the movies.

“I was pulling onto the back of the driver’s headrest and squeezing Michael’s knee. I was screaming in the car, ‘What am I going to do? Get me to the maternity!’.

“I thought I needed to be a certain amount of centimetres so I could get an epidural and if I passed that I was going to feel every bit of pain. Unbeknownst to myself I was going through all the pain I could have been going through.”

After Michael Daithi was born he didn’t cry straight away.

“I was scared at the start. It took about 30 seconds and then he cried. It was the longest 30 seconds of my life.”

“He was standing there just looking and he didn’t know what to do. Then all of a sudden he just broke down,” said Dennika. Somehow, Michael still went to work later because he wasn’t allowed stay with her in the maternity due to the restrictions.

They decided not to call an ambulance and continued on their journey as before – except with one more passenger.

“We rang them to let them know what happened. There was a nurse there to greet us at the door. They brought me up to the labour ward and did everything the same as if I had him there. They checked the baby over, making sure everything was perfect,” said Dennika.

Mum and baby were discharged the next day. Despite his rush to enter the world Dennika said that Michael Daithi is very relaxed and very good. The mum-of-two thinks they were in Elm Court Service Station for less than five minutes. A customer told staff that a baby was being born but before they could offer assistance the family had gone again.

Aideen Fitzpatrick, proprietor, said she and staff had all been thinking about them and hoping the mother and child were OK.

“Then Dennika’s aunt came in and told us who the mum was and that they were both fine. We were thrilled when we heard the news. It was so nice of them to make contact with us. We are after sending her a little gift, a One4all card. I hope they will always tell the story that he was born in Elm Court Service Station,” smiled Aideen, who wished the family all the best in the future and promised baby Michael Daithi free ice-cream for life!

The last word must go to Dennika who joked that, “If only we had a GoPro camera on one of our foreheads to capture it all. “The whole thing is bizarre! I am only coming to terms with it now,” said Dennika, as she held baby Michael Daithi in her arms.

Extracted in full from: https://www.limerickleader.ie/news/home/577492/special-delivery-as-limerick-mother-gives-birth-to-baby-boy-at-petrol-station.html

Oil prices on the slide as Iraq baulks at OPEC cuts