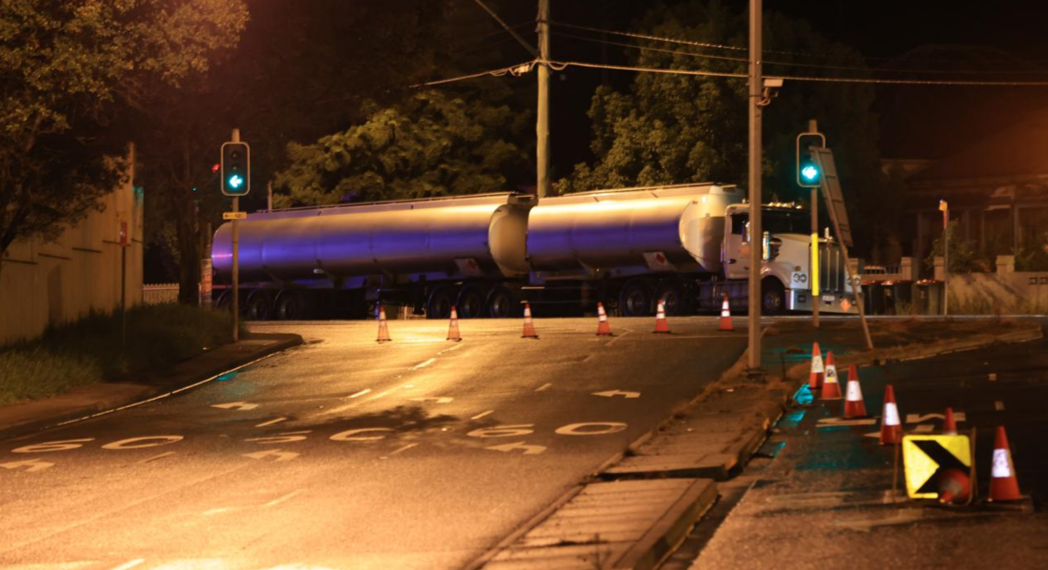 Residents have been evacuated from at least 20 homes in Sydney’s south after a truck crashed into two cars causing fuel to spill onto a major road.

A fuel tanker and two vehicles crashed between Marsh St and West Botany St, Arncliffe about 9.30pm on Wednesday night.

There were no confirmed reports of injuries.

The fuel tanker, which was estimated to be carrying 55,000 litres of fuel, leaked from its connection at the rear of the vehicle onto the road.

Residents have been evacuated from their homes in Arncliffe in Sydney’s south after a truck and car crash saw thousands of litres of fuel spill onto a major road. Picture: OnScene Bondi

Firefighters are on the scene. Picture: OnScene Bondi

Police are helping to block off the road. Picture: OnScene Bondi

Firefighters and police officers were forced to doorknock the neighbourhood to evacuated about 40 people from 20 homes as the leak continued to spread down the street creating a fire risk.

Foam blankets were use to soak up the spill and hazmat crews were onsite cleaning up the fuel until about 10pm.

It was not known how much fuel leaked onto the road but a freighter said it was “a significant amount”.

Residents have not yet been allowed back into their homes.

West Botany St remains closed in both directions with traffic diverted onto Wickham St or turned around at Marsh St.

Extracted in full from: https://www.dailytelegraph.com.au/news/nsw/a-large-fuel-spill-has-caused-traffic-diversions-around-the-inner-city-after-an-accident/news-story/6180d9854d8dbe38bde11c5b6185ce90