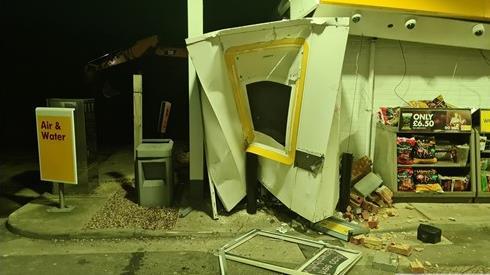 Detectives from Kent Police are appealing for information following the theft of a cash machine which was smashed from the wall of a service station on the A299 Thanet Way.

The incident at the Shell Lychgate garage near Dargate was reported at around 1.50am on Monday 1 March.

A CAT digger was used to remove the cash machine, causing a considerable amount of damage.

The ATM was then loaded onto the back of a grey flatbed Ford Transit, which is reported to have left the scene in convoy with a dark-coloured Mitsubishi Shogun.

The incident is being linked with an unsuccessful attempt to steal a cash machine from the wall of a Tesco Express store in High Street, Dymchurch, at around 2.15am on Sunday 28 February.

Both offences are being investigated by detectives from the Kent and Essex Serious Crime Directorate.

Extracted in full from: https://forecourttrader.co.uk/latest-news/criminals-use-digger-to-steal-cash-machine-from-shell-service-station/653809.article

Man arrested, two on run after string of armed robberies

Shell in court over claims it hampered fossil fuels phase-out