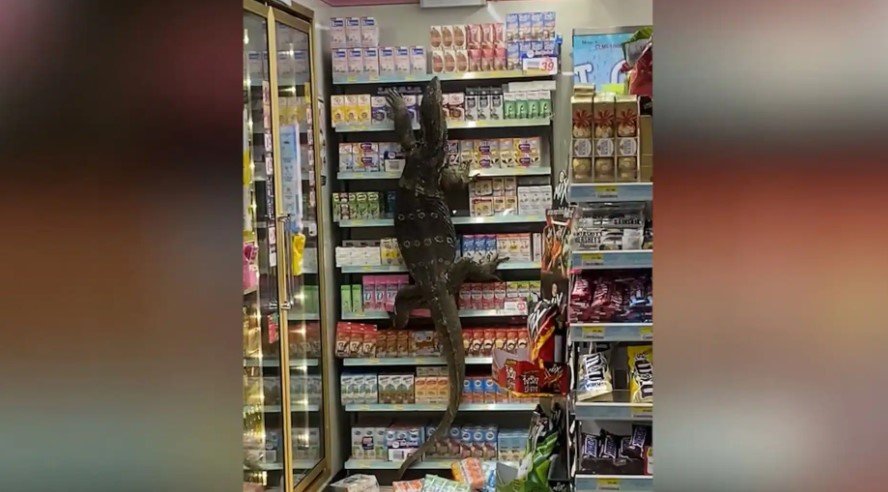 Even lizards thank heaven for 7-Eleven.

A large reptile reportedly entered a convenience store in Thailand in search of food. The animal apparently sent workers and customers into hiding as it tossed items off the shelves.

The six-foot-long monitor lizard entered the store after emerging from a nearby canal in Nakhon Pathom on April 6th, Southwest News Service (SWNS) reports. The animal reportedly climbed onto shelves and tossed several cartons of milk onto the ground.

Customers and workers reportedly hid behind the store’s counter during the incident.

Fortunately, reptile handlers quickly arrived on the scene and were able to snare the animal. It was reportedly released back into some nearby undergrowth. The animal apparently didn’t actually make off with any food from the store.

Monitor lizards typically feed on fish, snakes and frogs, although they will also eat food left behind by humans if its available.

According to SWNS, Narumpa Tangsin was one of the customers in the store at the time. He said, “I only stopped at the shop to buy some food and then saw the huge monitor lizard inside. I wanted to buy a drink but the animal was too close to the drinks aisle.”

He continued, “They’re dangerous animals, especially when they’re angry, so I stayed back and recorded it on my phone. I guess that shops have everything, even for lizards.”

he area has suffered from a bout of dry weather, which may have made food outside of the store hard to find, SWNS reports. Monitor lizards will act aggressively towards people if they feel threatened and their bite is considered to be mildly venomous.

UK: Yob trashes petrol station when cashier asks him to leave for refusing...