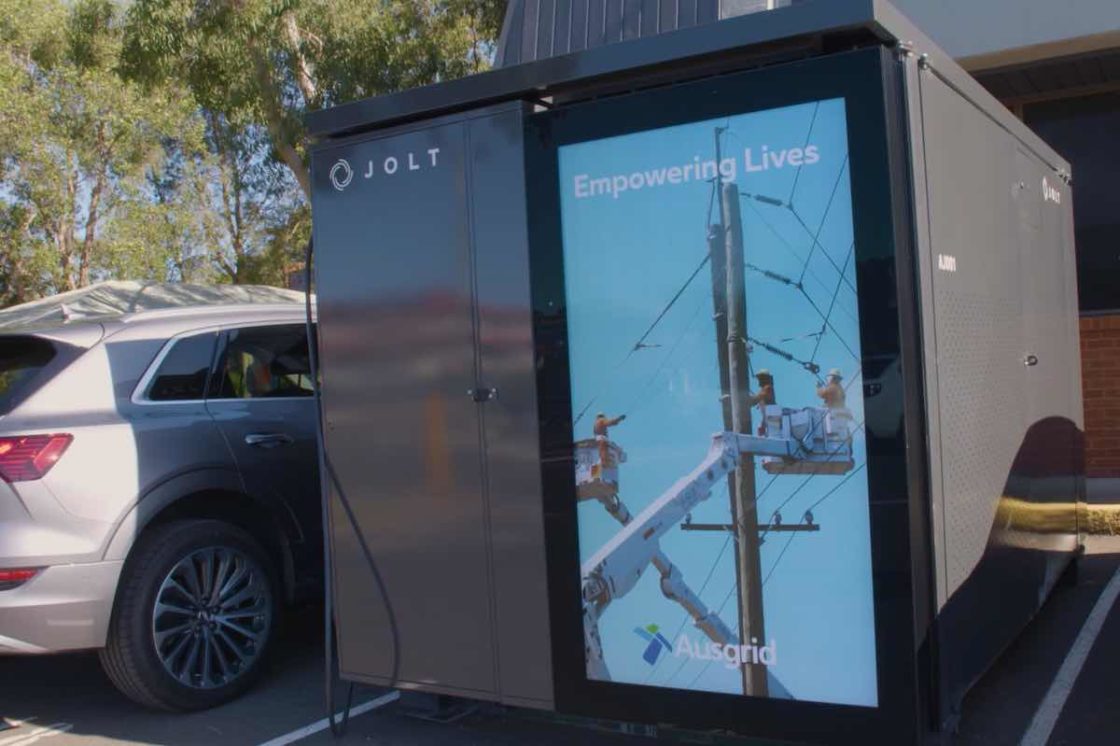 usgrid has unveiled a prototype electric vehicle fast charging station in Sydney as part of the electricity utility’s plan to transform existing street-side power kiosks into a network of “state-of-the-art” – and partly free to use – EV chargers.

The plan was first aired in October last year, with Ausgrid revealing that it would partner with start-up Jolt on the project that would tap existing electricity infrastructure – Ausgrid has 13,000 green power boxes like the one pictured below across its network –  to provide a much-needed boost to Australia’s electric vehicle charging infrastructure.

Ausgrid CEO Richard Gross and Jolt CEO Doug McNamee on Friday unveiled the first prototype of the EV kiosks in Hornsby in Sydney’s northern suburbs, the first of potentially hundreds that could be rolled out across the Ausgrid network.

“It’s an exciting day today, we’re unveiling our prototype EV charger and we’re leveraging off our own assets, our kiosks, and we’re converting them into charging stations for EVs,” said Gross at the unveiling.

Gross said the rollout, starting in Horsnby and then moving into Dee Why, was expected to have 60 or 70 kiosk conversions completed by the end of the year.

Once ready to use, EV drivers would be able to sign up to an app that would switch on the curb-side charger and provide 15 minutes, or 45 kilometres free of charge. Users looking for more than 7kWh could opt to pay for further energy.

“For many people, that really could cover the cost of their commute,” said Ausgrid’s chief customer officer, Rob Amphlett Lewis, at the launch, adding that Jolt had estimated that the free charging allowance could save people up to $1,000 a year, in terms of their electricity costs.

“It really is a game changer,” said Gross. “[A lack of EV charging infrastructure] is one of the big barriers to the adoption of EVs… So if we can help by …getting more chargers out there, more electric vehicles, it’s just great for everyone.”

NSW energy minister Matt Kean was also present at the kiosk unveiling and said that he was supportive of any initiative to encourage electric car use – particularly being an EV driver and owner himself.

“I have my own electric car and they are great. As we strive to reach Net Zero by 2050, we need to encourage as many people as possible to use them,” Kean said.

“EVs are not going to destroy the weekend, they’re going to make it even better and even cleaner and even cheaper for people to get around.

The NSW government is committed to getting more electric vehicles on the road and these free charging stations are a great incentive and a key step in the ongoing transition towards cleaner transport options.”

Kean’s encouraging comments follow the news this week that the NSW Liberal Berejiklian government has decided to take a more “nuanced” approach to the introduction of an electric vehicle tax, following the fallout from Victoria’s planned introduction of a road user fee in July.

“Over time, people who use the roads should pay for the roads, just like they do with fuel excise, but what we don’t want to do is impede innovation and take-up of electric vehicles,’’ NSW treasurer Dominic Perrottet was quoted as saying by the Sydney Morning Herald on Thursday. ‘‘We’re working on a holistic package to announce in the budget.’

Back at the unveiling of the Ausgrid EV charger, JOLT CEO Doug McNamee said he hoped to rollout hundreds of charging kiosks across the Ausgrid network.

“We have developed our free fast charge network to solve the major barriers to electric vehicle ownership, which are access to charging, cost and range anxiety.

These charging stations will allow people to pull up, plug in and be on their way again after 15 minutes,” he said. “With free fast charging we hope more people embrace electric vehicle ownership in NSW.”

Where to from here for EV’s in Australia?

Read More
Where to from here for EV’s in Australia?