Remember Scott Morrison’s potent condemnation of Bill Shorten at the last election for wanting 50 per cent of new car sales by 2030 to be electric vehicles? Labor policy would have killed off tradies’ utes, according to the Coalition, and endangered Australians’ weekend by making it impossible to tow boats and caravans.

There will be no repeat performance of such political inanities at the next election. Not when two Liberal state governments in NSW and South Australia, as well as Victoria’s Labor government, are now pushing almost exactly the same target as Shorten did. 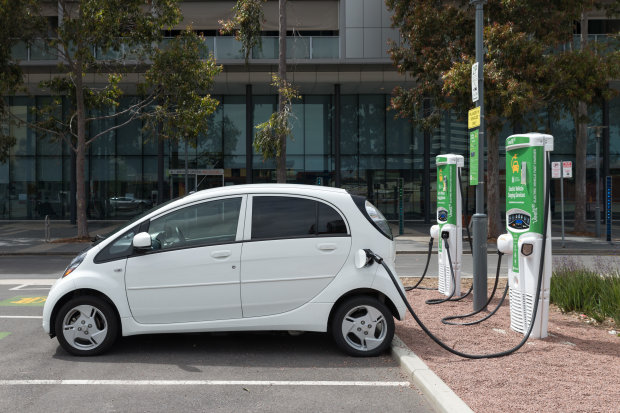 Not when the rules of the road are changing so fast. But it’s not just that other countries and car manufacturers have adopted similar or faster timelines.

The bigger risk for Australian drivers now is they will be near the back of the global queue for newer, cheaper models of electric vehicles over this decade.

It’s another example of how quickly preferences can shift in a range of industries given demand for faster emissions reductions and falling costs for renewable energy. But for the Australian car market, the road still has plenty of large potholes en route to a far horizon.

Only around 1 per cent of new car sales in Australia last year involved electric vehicles, for example. And despite some financial incentives offered by state governments, there’s considerable consumer hesitation about price and about reliability in travelling distances.

The uptake of electric vehicles, including hybrids, will still inevitably increase dramatically over the next several years as battery costs decline, charging infrastructure is rolled out and technology keeps advancing.

Canberra risks missing the chance to gradually transition its tax take from the car industry at a time of least political cost.

That is also why state governments are taking advantage of Canberra’s resistance to introducing road user charges for electric vehicle owners by implementing their own.

The result is the states will have a new, growing revenue source – even though minimal as yet – and Canberra a steadily diminishing staple. The federal fuel excise levy, worth about $11 billion a year, can only decline over time with nothing in place to make up for it.

Over several years, various Coalition ministers have been set the task of investigating road user charges but nothing has eventuated due to political sensitivities and internal resistance – for different reasons.

Yet for all the predictable electrical vehicle industry complaints about inhibiting the growth of a laggard market, it’s much simpler politically for governments to introduce charges at a low level while customer numbers remain tiny. The carrots can also be relatively modest and temporary.

Canberra risks missing the chance to gradually transition its tax take from the car industry at a time of least political cost. It leaves the states happily shifting gears into the policy vacuum via their own financial road grab. Gazumped!

It also means yet another market facing different state taxes and conditions rather than one nationally consistent approach.

The NSW government, as part of its budget, is leading the way. It is playing it cautiously by offering more carrot than stick but producing longer-term reform. At a cost of $500 million, it will abolish stamp duty for electric vehicles costing less than $78,000 and provide a $3000 rebate for the first 25,000 vehicles sold under $68,000.

It will also fund more charging infrastructure on highways while electric vehicles will have access to priority car pool lanes and parking spots for battery charging.

In return, NSW will impose a road user charge of 2.5¢ per km on electric vehicles and 2¢ for plug-in hybrids by 2027 or once they make up 30 per cent of new car sales – whichever comes first.

Victoria’s less generous $100 million package of incentives offers a limited number of $3000 discounts and registration reductions but equivalent road user charges will start from July 1. South Australia will adopt a similar charging model from next year. Expect other states to follow the same route.

The federal government acknowledges the cost of hybrid, battery and hydrogen fuel cell electric vehicles will steadily reduce to match or fall below conventional petrol and diesel vehicles. Its own projections are for EVs to reach 26 per cent of new vehicle sales by 2030.

But Canberra is resisting subsidies to boost sales. Nor does it favour any system of local carbon credits for sales of electric vehicles. These credits have encouraged global car manufacturers to internally subsidise prices of EVs in other countries while also countering the cost of higher emitting and higher taxed vehicles.

That means Australians will continue to pay more for longer.

Energy Minister Angus Taylor argues subsidies don’t offer value for money in emissions reduction per tonne relative to other government options. That’s compounded by an electricity supply still heavily dependent on coal-fired power. The energy mix will change considerably over this decade, however, along with the use of rooftop solar to charge car batteries.

The federal government is still focused on the more immediate benefits of upgrading commercial fleets lured by cheaper running costs while improving public charging infrastructure to give consumers confidence about distance driving.

So its Future Fuels Fund commits $72 million for co-investment with the private sector in addressing highway “blackspots” in infrastructure for charging electric cars or hydrogen refuelling.

That sounds promising until companies point to the high cost and dubious financial returns of long-distance charging infrastructure in Australia now. Years of investment delays beckon.

The Brisbane-based electrical vehicle fast charging company Tritium has been able to brilliantly leverage US appetite for its technology with a $2 billion listing on the Nasdaq planned, for example. But 95 per cent of its business is overseas.

Chief executive Jane Hunter says NSW’s strategy will stimulate uptake of electric vehicles and put pressure on other states. What about Canberra?

Extracted in full from: NSW budget: States charge ahead on electric vehicles (afr.com)

Tens of thousands of jobs’ at risk if petrol car imports are banned, ...