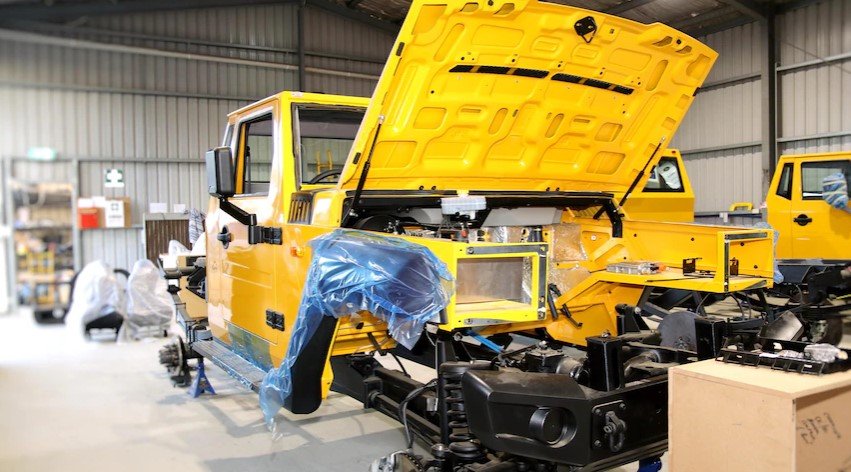 Five years after the demise of Australian vehicle manufacturing in Adelaide, a growing number of businesses are retrofitting diesel light vehicles into custom electric vehicles (EVs) in Australia for use in underground mines.

Victoria-based mining supplier Safescape began developing its own EV in 2018.

“The batteries are assembled by a company in Newcastle and the vehicles are all built in Bendigo and marketed from there.”

Having completed a series of prototype trials on Australian mines, Safescape expects to deliver between four and six EVs every month.

And it’s not alone.

GB Auto signed a deal last year to retrofit 2000 LandCruisers into EVs at their facility in Orange, NSW.

Zero Automotive manufactures a “whole modular [electric] platform” for their own version in Adelaide.

Mr Deadman said Australian miners are “on the front foot of putting electric vehicles underground,” relative to US counterparts.

“I think we’re going to be at the forefront of light electric vehicles in the world,” he said.

“It’s pretty well going to be forced upon people to run electric vehicles [underground] because the vent flow in the mine is paramount.

“If you’re counting light vehicles in the vent flow — five diesels and you have to take one truck out so all of a sudden it becomes a big cost issue.” “Some last as little as 18 months before they’re put in the scrapheap.

Managing director of mining company Ausgold, Matthew Greentree, said “a lot of it’s actually been driven from the top down by financing.”

“Some of these technologies are better than what we’ve got at the moment in terms of diesel.”

Nonetheless, the inefficiencies of retrofitting and high cost of EV parts make for an intimidating purchase price, potentially more than double that of a diesel equivalent.

Safescape reportedly sells its Brazilian ex-military EV for about $300,000.

Likewise, LandCruiser conversions require the removal and resale of a diesel drivetrain at significant expense.

Mr Mitchell accepts that automakers’ capital and capacity to manufacture at scale would likely drown retrofitters out if they entered the market, but believes they are unlikely to do so.
“[Automakers] are not going to build a vehicle to go underground,” he said.

“There won’t be enough vehicles for them to justify it.”

A spokeswoman did not confirm whether Toyota plans to manufacture a product of its own or sell LandCruiser chassis, as opposed to complete diesel vehicles, to Australian retrofitters directly.

“Any additional opportunities will be considered in due course,” she said.

“I can’t comment on [whether that will continue],” he said.