Almost all the profit from Ampol’s struggling Lytton refinery in Brisbane in the June half will come from taxpayer-funded subsidy payments after the plant scraped into the black in the June quarter.

Earnings before interest and tax at Lytton for the second quarter are expected to be “modest”, an improvement on the breakeven result for the March quarter, the former Caltex Australia said. 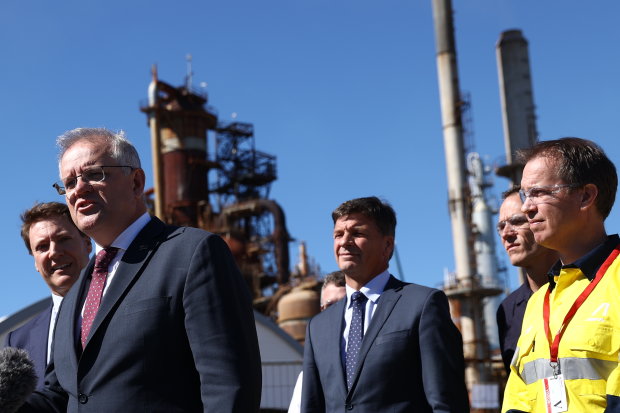 Prime Minister Scott Morrison, Energy Minister Angus Taylor and Ross Vasta MP announced the subsidy at a visit to the Ampol Lytton Refinery with AMPOL CEO Matthew Halliday in May.

That means the about $40 million that Ampol is expecting to receive from the federal government’s interim refining support package will be the biggest contributor to returns from refining for the first half. The temporary subsidy applied through the June half before the ongoing fuel security support measures came into effect on July 1.

Ampol had previously rejected the interim subsidy as it examined whether to keep Lytton open but became eligible for it once it decided in May not to close the plant for at least the next six years.

The fuel security package is intended to improve security of supply of petrol and diesel for Australia, providing a subsidy for fuels produced here, and putting in place minimum storage requirements for diesel.

The margin at Lytton was higher than the margin at the key Asian supply point of Singapore because of the lower cost of crude coming into Australia, it said.

The interim subsidy provided to Ampol and Melbourne-based Viva Energy in the June half comprised a minimum 1¢ per litre payment for domestic production of petrol, diesel and jet fuel. Viva reported earlier this month that it anticipated $40.6 million in the June half from the program, which was introduced to try to prevent further closures of domestic oil refineries and which also includes funding for plant upgrades  to meet cleaner fuel standards.

Two of Australia’s four plants have in any case since been closed, BP’s refinery in Kwinana, Western Australia, and ExxonMobil’s at Altona in Victoria.

Production at the plant was “strong”, it said, recording volumes of 1.573 billion litres in the quarter, up from 1.419 billion in the March quarter.

The quarterly figures on refinery performance come in advance of Ampol’s first-half earnings report on August 23, which will also include the wholesale and retail fuels businesses, and the convenience retailing operation.

RBC Capital Markets analyst Gordon Ramsay said the Lytton result was “broadly in line” with his view on margins, and said he anticipates production will be steady for the second half.

Mr Ramsay noted a “weak” refining market across south-east Asia persisted through the June quarter amid uneven economic recovery from the resurgence of COVID-19.

Ampol was among several companies that were awarded government funds for diesel fuel storage projects last week as part of the new minimum stockpile regulations.

The refining margin for Lytton improved to $US6.29 a barrel in the June quarter, up from $US5.48/bbl in the March quarter but still below historical averages, Ampol said.

The ongoing measures that started on July 1 include a subsidy that kicks in when refining margins are low, preventing the heavy losses suffered across the sector in 2020.

The diesel storage grants announced by federal Energy Minister Angus Taylor last week comprised up to $260 million for 10 projects that will increase stockpiles by 40 per cent.

Extracted in full from: Ampol refinery scrapes into profit (afr.com)