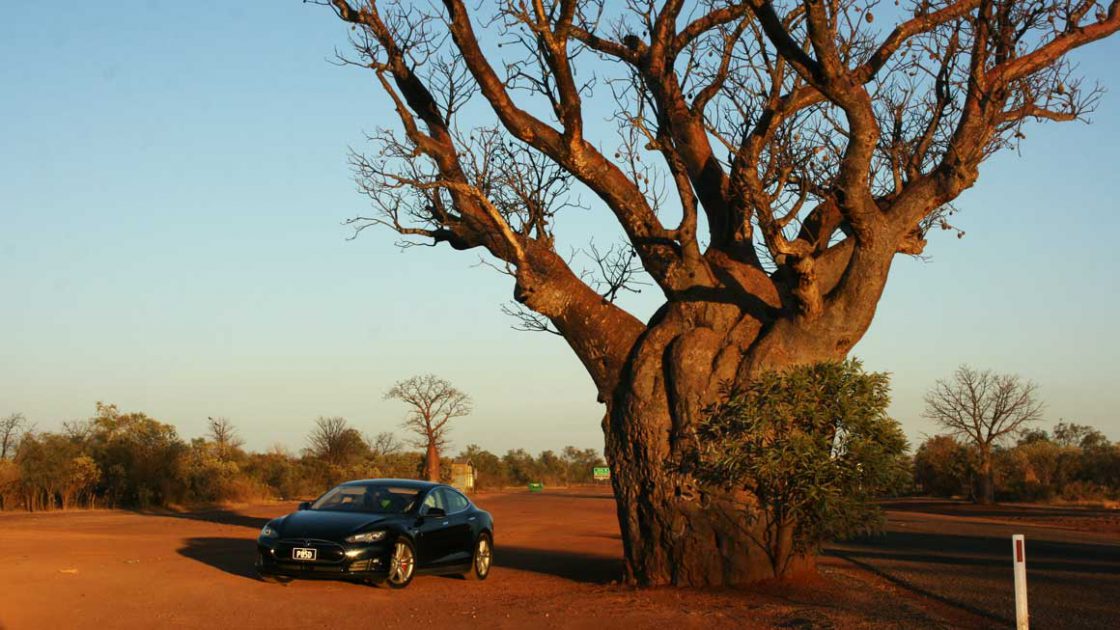 The rest of the world appears to have reached something of a tipping point in the transition to electric vehicles: Europe is planning to effectively ban the sale of new petrol and diesel cars by 2035, and most major car makers don’t intend to make any fossil fuel cars by then in any case.

Australia, however, worried about its weekends and having destroyed its own car manufacturing base, is trying to convince itself that doing nothing nothing, or very little, is going to be an OK strategy. It even has an issues paper that defines this not-doing-very-much approach, called its Future Fuels Strategy, or FFS for short.

That attitude is starting to frustrate a few people. Several states can see the trend and are now trying to make prepare themselves as best they can. The ACT and NSW in particular, with major initiatives in rebates and other incentives, and investment in charging infrastructure and driver education are leading the way.

But according to the Grattan Institute, the federal government really needs to act – first because any target of net zero emissions will require early gains in cutting transport emissions, and because it holds the key levers to policies that could make the transition a whole lot easier.

This graph illustrates the task at hand. So little has been done that transport emissions will go up over the next decade and there is not much we can do about that, short of stopping cars from driving. But putting policies in place now is necessary to ensure rapid decarbonisation is achieved in the 2030s. 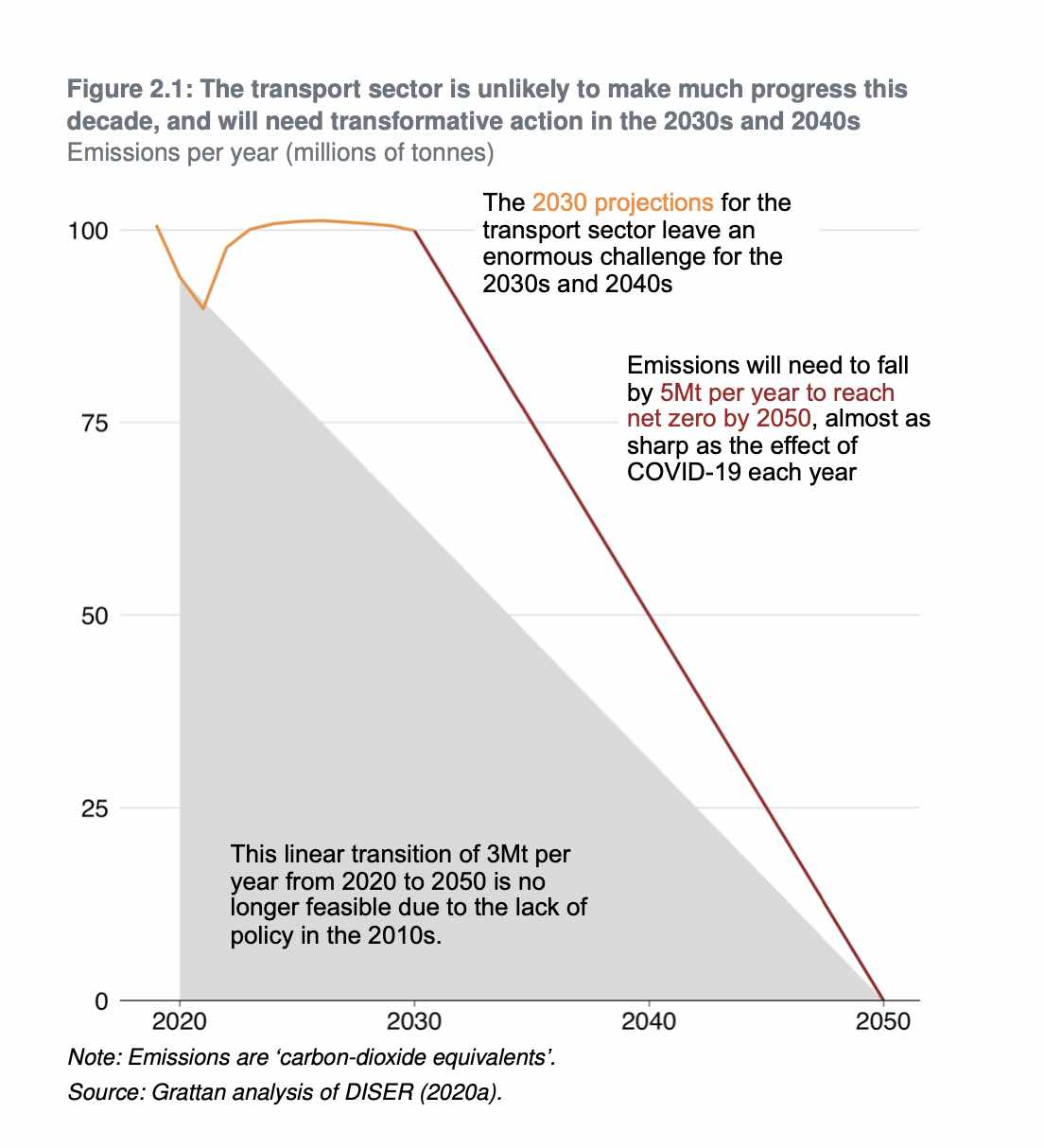 Grattan’s Tony Wood has issued a new paper that identifies four key policy areas where the federal government can and should be moving, even if he doesn’t hold out much hope that any or all will be put into effect, given its focus to date has been on handing out big subsidies to oil refiners and diesel storage.

Number 1 on Wood’s policy list are mandatory emissions standards for light vehicles, reducing them systematically down to zero by 2035 (as Europe proposes). It’s much more effective than an outright ban, he says, because it guarantees emissions savings from the get go.

The Coalition has toyed with this idea, but then environment minister Josh Frydenderg was so traumatised by a headline in the Murdoch tabloids (“a carbon tax on wheels”), that he promptly dumped the idea.

Australia remains with no emissions standards, and the poor quality fuels in not just killing people in the streets (an estimated near 2,000 annual deaths a year to lung disease from exhaust particulates), but it means Australian vehicles are so inefficient they are probably burning $600 a year more fuel than they need to.

Number 2 on Wood’s top four policy measures is to scrap import duties and stamp duty on zero-emissions vehicles, and waive luxury car tax on such vehicles for the rest of the decade.

Several states have done this on stamp duty and federal Labor – in one of their very few policy excursions since the last election, have promised to scrap import duties and LCT. Wood also suggests increasing truck width limit in Australia from 2.5m to 2.6m to ensure vehicle like Ford’s electric F150 and Tesla’s Cybertruck can be easily imported.

Number 3 on Wood’s list to ensure buildings and the electricity grid are ready for electric vehicles, by updating the national construction code to ensure sufficient off street charging, and necessary tariff reforms for smart management of vehicle charging.

The last bit is starting to occur in some states, and the CSIRO and the market operator are already considering scenarios that phase out new fossil fuel cars by 2035. They know that EVs are going to have a major impact on the way we use the grid, and there will be benefits as well as challenges.

Number 4 on Wood’s list are options for reducing heavy vehicle and aviation emissions, including targeted trials for zero emission trucks, including hydrogen, and developing standards and certification for renewable hydro-carbons i.e. from biomass and wast, along with a renewable fuel standard for diesel, shipping fuel and aviation fuel.

“We need to move fast,” Wood says. “And we can’t afford to simply wait around for electric cars to become cheap, because we will never get to zero emissions by 2050 unless there is big spending on a cash for clunkers program for cars.”

The reasons for that is that even with a relatively high share of EVs in new car sales, it will take a long time to change over the whole fleet. That’s why bringing sales of new petrol and diesel cars by 2035 is so important, because there may still be a million or two fossil fuel cars on the roads by 2050, short of an outright ban. (See table below).

We need to bring an end date for the sale of new petrol and diesel light vehicles,” he says.

And Wood feels that most points of opposition have melted away, including much (but not all) of the auto industry itself, and all of the motoring groups, who now are ready to embrace the transition.

“Why wouldn’t you do this,” says Wood, who owns an EV himself, a Jaguar I-Pace. All it needs is for the federal government to have the courage to face down potentially unfavourable headlines in the Murdoch media. Is that too much to ask?

Extracted in full from: Four ways to help Australia end sales of new petrol and diesel cars by 2035 (thedriven.io)

Read More
How to cut emissions from transport: ban fossil fuel cars, electrify transport and get people walking and cycling