Supermajor Chevron Corp. won some compliments for separating itself from other oil majors with a $10 billion plan to invest in fuels and carbon capture that will help the company’s transition to a low-carbon future. But critics said the effort will not cut the producer’s carbon emissions quickly enough to meet the goalposts of a net-zero emissions world by 2050.

Chevron said Sept. 14 that it would use about 10% of its planned capital spending over the next eight years, or about $10 billion, for investments in early-stage hydrogen, carbon capture use and storage, or CCUS, and renewable fuels projects, as well as reducing emissions from its current oil and gas operations. Unlike many of its European peers, Chevron said its path to becoming a low-carbon emitter would not involve solar or wind electricity projects.

Chevron is playing to its strengths as an oil and gas company, said David Victor, a professor of innovation and public policy at the School of Global Policy and Strategy at the University of California San Diego.

“If you want to make big reductions in emissions and specialize in areas where you have skills, it is probably going to be hydrogen, CCUS-focused, and not so much on the electric side,” Victor said. “All that plays to their skills as a company that knows how to run refineries, that knows how to manage complex chemical engineering projects, knows how to put things underground.”

Talking to Wall Street analysts on a conference call to roll out the Chevron transition plan, Chairman and CEO Michael Wirth broke out the spending: “On the $10 billion, you can think of that as roughly $3 billion on carbon capture and storage and offsets, another $3 billion on renewable fuels, about $2 billion on hydrogen and about $2 billion on greenhouse gas reduction activities within our own portfolio.”

Victor viewed the announcement with some skepticism. “What’s hard to interpret, though, is that this is an aspirational budget,” Victor said. “That it is 10% of their capital budget and not really nailed down, so we don’t know what’s real.” 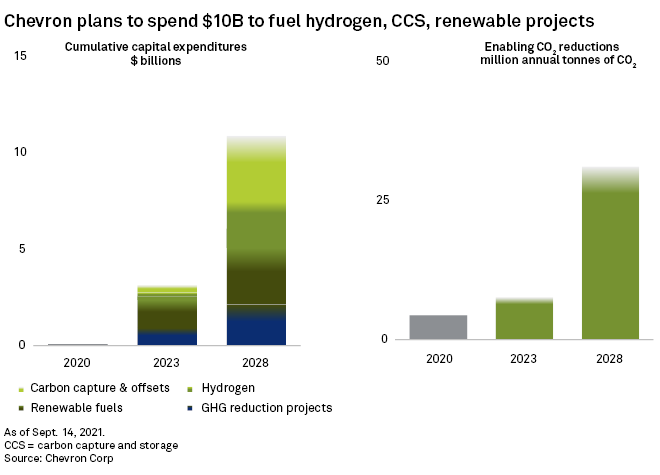 Senior oil and gas analyst Jake Leiby at credit research firm CreditSights agreed that the Chevron plan represents a “measured” response using the company’s existing skills. “The company’s updated plans to position itself for the energy transition center on renewable fuels, CCUS and hydrogen, standing in contrast to European peers like TotalEnergies SE and BP PLC, which are allocating significant capital to solar and wind power,” Leiby said.

Chevron’s plan to add more carbon-burning businesses on top of their standing oil and gas production was a non-starter for the Carbon Tracker Initiative’s Axel Dalman, an oil and gas analyst with the London-based think tank focused on the financial impacts of climate change.

“It’s not enough to just add green energy on top and focus on the lowered emissions intensity, because the global carbon budget is ultimately based on absolute emissions,” Dalman said in an email. “As long as oil and gas companies view the energy transition as an additional item, rather than a threat to their core business, they’re unlikely to prepare sufficiently for the demand disruption to come, and [they] expose themselves to stranded asset risk down the line.”

Andrew Logan, the senior director for oil and gas at Ceres, a group that advocates for sustainability to investors, companies and policymakers, said Chevron’s focus on carbon capture and storage and the purchase of carbon offsets represents bets on strategies that do not work.

“These are all positive steps, but they really pale in comparison to the sort of transformational change that I think many investors want to see them make,” Logan said.

The University of California’s Victor acknowledged the sector’s challenges in navigating the evolving landscape around emissions reductions. “The industry traditionally has been a high-risk, high-return industry, precisely because they take risks of this type,” Victor said. “All these companies are struggling with how they transform themselves to an unfamiliar world without blowing themselves up.”

Extracted in full from: Chevron’s $10B plan for energy change is high-risk break from the pack | S&P Global Market Intelligence (spglobal.com)