To facilitate rapid decarbonisation and cut dependency on fossil fuels, both nuclear energy and renewables are needed for power and hydrogen production, a new independent study has concluded. The study, by Aurora Energy Research, investigates the benefits of deploying both nuclear and renewables for hydrogen production, to support the energy transition and meet UK climate targets. 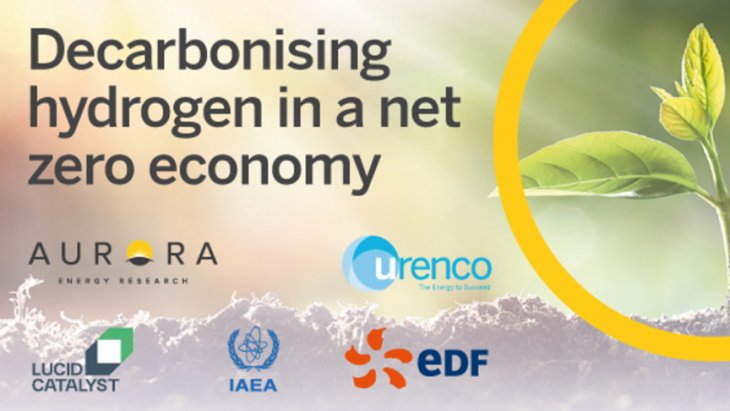 The report – titled Decarbonising Hydrogen in a Net Zero Economy – was commissioned by Urenco and has been supported by the International Atomic Energy Agency, EDF and Lucid Catalyst.

It follows the UK government’s Hydrogen Strategy, published last month. The Hydrogen Strategy stated that nuclear provides a number of options for producing clean hydrogen, but did not model the costs and competitiveness of nuclear’s contribution.

“The majority of studies on the future of the hydrogen sector in Great Britain focus on electrolytic hydrogen from renewable energy sources (RES) and fossil-based hydrogen with carbon capture and storage (CCS),” the report says. “The potential for nuclear to participate in the hydrogen economy is often not considered due to high costs of recent assets and lack of clear policy direction leading to planned projects being put on hold.

“This study investigates how policy support for new nuclear technologies and business models to provide low-carbon electrolytic hydrogen could reduce nuclear and system costs whilst reducing reliance on fossil fuels when deployed alongside RES on the path to net-zero.”

Aurora’s report utilises the company’s integrated modelling suite to capture market interactions and impacts of deploying RES and nuclear to achieve net-zero. Aurora’s in-house Net-Zero scenario reflects all recent UK government targets, including the Energy White Paper‘s 40 GW of offshore wind and capture of 10 million tonnes of carbon dioxide via CCS by 2030. Installed power capacity is seen increasing from 107 GW in 2021 to 257 GWe in 2050, driven by rapid growth of renewables and peaking capacity. Nuclear generating capacity increases from 9 GW to 21 GW over this period. Power generation grows from 312 TWh in 2021 to 643 TWh in 2050, with nuclear generation increasing from 59 TWh to 159 TWh. Meanwhile, hydrogen production capacity increases from 5 GW to 69 GW over the same period.

Aurora’s decarbonisation model differs from traditional approaches in that it assumes: all emissions-free generating technologies are treated equally and compete on cost; after 2030, capacity auctions are only available for zero-carbon generators; and nuclear costs and market applications are fully represented in the model.

The study found that to facilitate rapid decarbonisation and cut dependency on fossil fuels, both nuclear and renewables are needed for power and hydrogen production. Together, nuclear and renewables can provide the hydrogen volumes needed for net-zero in 2050. Deploying large volumes of nuclear alongside renewables is economically efficient, reducing the net present value of the UK’s total system spend by 6-9% (GBP40-60 billion) to 2050. It also found combining hydrogen and nuclear leads to competitive costs. Using heat and electricity together from a nuclear power plant for hydrogen production provides a strong cost advantage. Cumulative greenhouse gas emissions to 2050 can be reduced by 80 million tonnes CO2e and gas usage in power and hydrogen by 8000 TWh thermal.

The latest report is a follow-on to Aurora’s 2020 study Hydrogen for a Net Zero GB: An Integrated Energy Market Perspective. It notes that while the new study is focused on the UK, the results are applicable to other countries, including developing nations.

“There is an exciting potential for combining nuclear, renewables and hydrogen to deliver a net-zero economy,” said Felix Chow-Kambitsch of Aurora Energy Research. “Aurora’s new report is the first study of its kind to demonstrate how nuclear can complement renewables and hydrogen. Achieving hydrogen volumes required for net-zero without fossil fuels will be challenging without electrolytic hydrogen from nuclear and renewables. An energy system with high ambition in nuclear power can reduce its reliance on fossil fuels, reduce carbon emissions, and reduce system costs.”

“Nuclear power clearly has an important role alongside renewables in the clean energy transition through supporting reliable, low-carbon electricity generation and the future production of hydrogen,” said Urenco Group CEO Boris Schucht. “To realise this, we need to unlock investment, by creating a new financing model for nuclear and a market environment for hydrogen. The development of high-temperature reactors would be one way that nuclear can support hydrogen, given these designs are very efficient for the production of hydrogen.

“This latest research is an important step in enabling policy makers to pave the way for the delivery of net-zero by 2050. We look forward to constructive conversations in the coming months and strong collaboration across industry and government on this critical work.”