Fuel volumes & prices – the year that was FY21

The ACCC released the latest in its series of quarterly petrol price monitoring reports on 14 September 2021. Unlike the select use of pricing data by media opportunists like the RACQ, the ACCC report (ACCC’s latest petrol monitoring report) provides a fact-based analysis of average retail petrol price trends over the June Quarter 2021 as well as an annual review for the 12 month period ending 30 June 2021.

“This latest ACCC report is very notable as it provides some key descriptors of the impact of the COVID-19 economic downturn on the Australian fuel market as well as providing data that makes an absolute mockery of the shrill fuel price criticism of organisations like the RACQ over the past 12 months”, said ACAPMA CEO Mark McKenzie.

Some of the more notable findings of the ACCC report are briefly discussed below.

1.  Average Fuel Prices the Lowest in 22 years in real terms

The ACCC noted that average petrol prices in Australia’s 5 largest cities during 2020-21 were the lowest in 22 years in real inflation adjusted terms. In fact, the ACCC analysis shows that real average fuel prices (i.e. the nominal average price adjusted for inflation), have been falling since their peak in 2007-2008 as shown in Figure A. 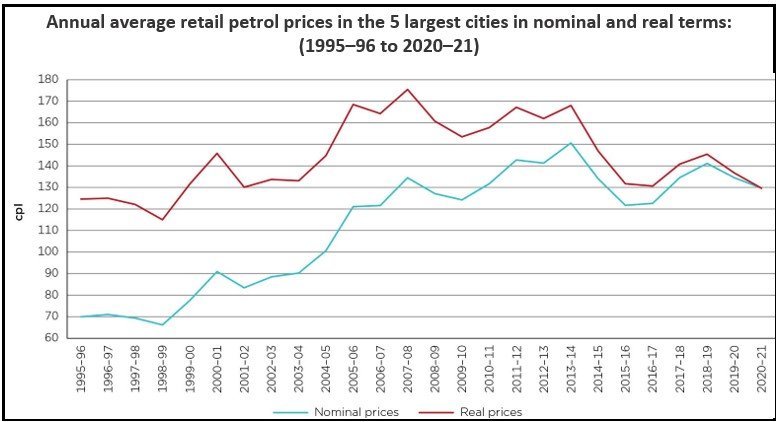 Figure A: ACCC found that average fuel prices are the lowest that they have been since 1999-2000 and that this prices have been on a largely downward trend over the last 13 years (Source: ACCC’s latest petrol monitoring report)

There are clearly lots of factors contributing to the fall, not the least of which is the moderating of global oil prices and intense regional competition for refined fuel products in our part of the world.  It is also clear that the industry has been able to continue to deliver these low average prices in the face of increased wage costs, increased operating costs (such as leases and equipment costs) and ever- increasing government taxes on fuel in the form of fuel excise.

“It is hard to think of any other industry in the country where the real prices of their products are lower today than they were 22 years ago – the same certainly cannot be said for the insurance products and other services provided by the nation’s motoring associations, who are constantly criticising industry on fuel prices”, said Mark.

The other notable aspect of the ACCC report was the comparison of fuel prices over the past 12 months with the prior year.

This analysis (as shown in Figure B) shows that the seven-day rolling average retail petrol prices in Australia’s 5 largest cities dropped sharply during the national lockdown – largely due to a sharp fall in global fuel price in the face of sharp demand destruction at both a global and national level – before recovering in the latter half of the financial year. 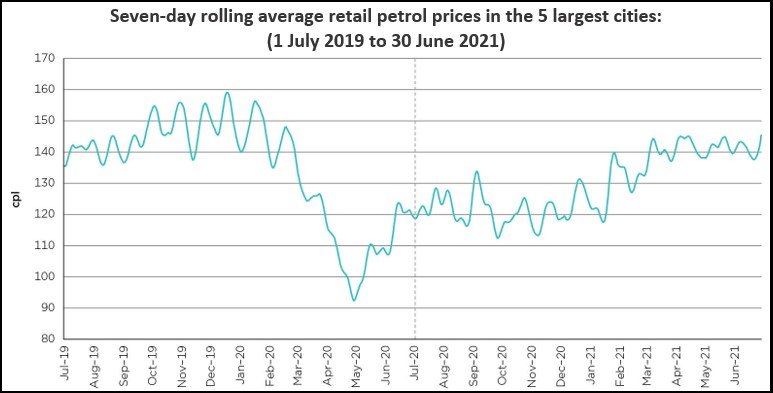 Figure B: ACCC found that average retail prices in 2020-21 were lower than the prior year (Source: ACCC’s latest petrol monitoring report), albeit that prices started to recover after the demand destruction that occurred during the national lockdown (April to June 2021) and the extended Victorian lockdown.

It is worth noting that unit average fuel prices in 2020-21 were lower than the prior year (2019-20) despite significant falls in fuel volumes experienced by the industry due to the COVID-19 economic downturn, as shown in Figure C. 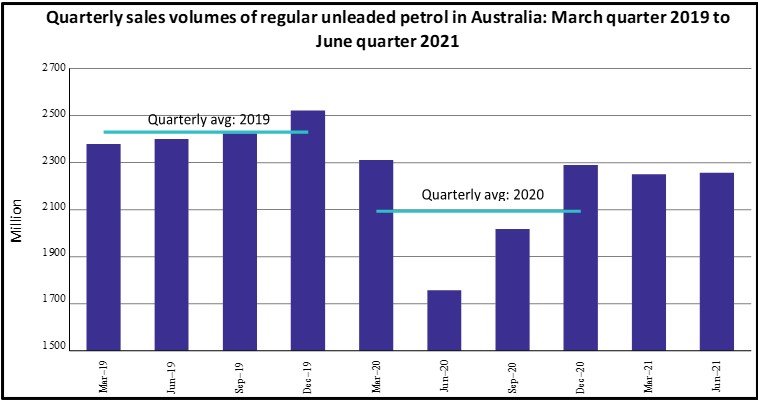 Given that costs largely remained the same for businesses after the national lockdown (and the cessation of JobKeeper), it might reasonably have been expected unit retail costs to climb markedly to compensate for lower overall revenue (i.e. same costs and lower revenues leads to higher gross retail component to break even) – but lower global wholesale prices and local competition assisted in keeping retail prices low.

“The fact that our businesses were able to maintain their operations in the face of such a dramatic fall provides testimony to the quality of support provided by the Australian Government with programmes such as JobKeeper and the ‘true grit’ of the phenomenal people that work within our industry”, said Mark.

3.  Government taxes were the highest cost component in FY21

COVID 19 resulted in a lot of extraordinary things happening to demand and pricing during 2020-21.

One of the notable aspects was that, for the first time in a long time, government taxes and charges accounted for the greatest component of the average petrol price paid at the pump by Australian motorists in the 5 largest cities (see Figure D). 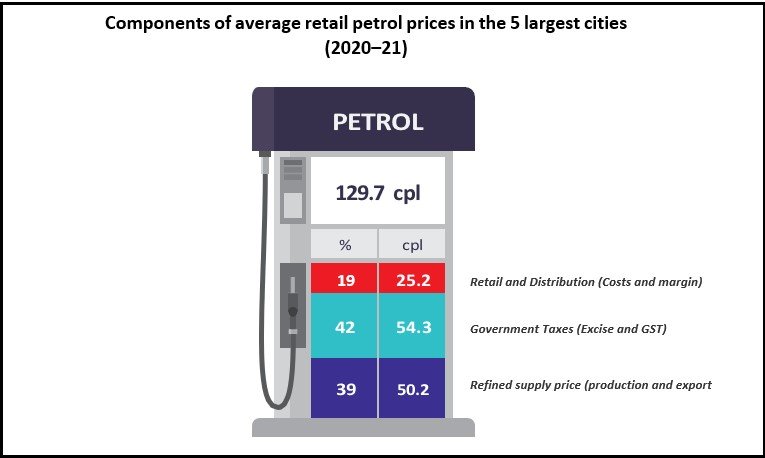 During 2020-21, the refined supply price component of Australia’s fuel average petrol prices dropped by 2% (due to global price falls) while the component relating to government taxes and charges increased by 2% (largely because excise is fixed and did not fall in line with supply price falls), when compared with the previous year. The Retail and Distribution component remained steady in 2020-21 compared with the prior year.

4.  The difference between the wholesale price and retail price at servos trend down

The average difference rose during the June 2020 Quarter as service station businesses struggled to cover costs in the face of a dramatic reduction in fuel sales and then decreased as fuel volumes recovered.

The average difference between the wholesale price paid for service stations for the supply of fuel and the retail price levied on motorists – known as the Gross Indicative Retail Difference (or GIRD) – moved around during 2020-21, largely in line with the impact of COVID 19 on the economy as shown in Figure E.

“While it may be argued that these differences are still higher than the longer-term average, it is worth noting that they are trending back to that average, but will always continue to be influenced by annual rises in business costs such as wages, lease costs and utilities”, said Mark. 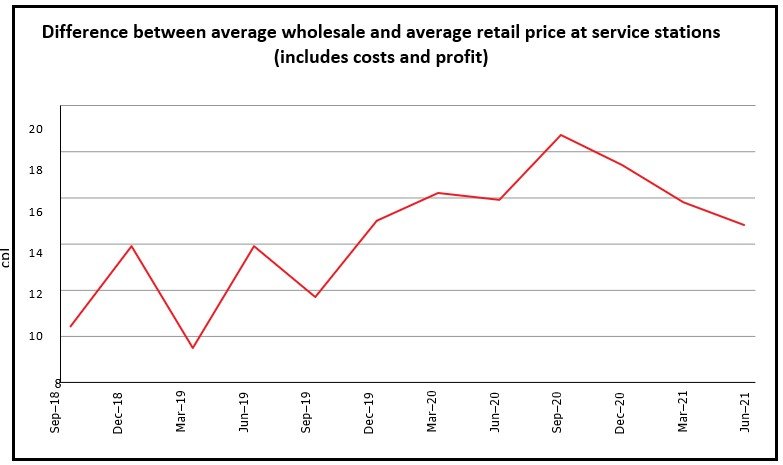 Figure E: Movement in the gross difference (includes costs and profit) between the average wholesale cost of fuel to service stations and the retail price sold to motorists in Australia’s 5 largest cities during 2020-21. (Source: ACCC’s latest petrol monitoring report).

All things considered, 2020-21 was a tough one for the fuel industry as all fuel businesses (suppliers, wholesalers, distributors, and retailers) struggled to keep their heads above water in the face of an average 14% decline in retail sales volumes, and it is not over yet.

“While calendar year 2021 started well, it is clear that the lockdowns in Victoria and NSW, and the flow on impacts to other states in terms of reduced business and tourist traffic, will continue to create financial challenges for fuel businesses through to the end of the year”, said Mark.

The ACCC analysis does show, however, that when you consider fuel trends – as opposed to selectively citing fuel prices at the change of a fuel cycle – you can see that the industry is a highly competitive one that is delivering average fuel prices to motorists that are falling in real terms.

“Whether that fall continues in the future is anyone’s guess as our industry is subject to the vagaries of global finished fuel price movements and intense domestic market competition, but one thing is for sure – the churlish fuel price commentary of the RACQ and others during the past 12 months is both unwarranted and unjust”, concluded Mark.