Plans for a $3.1 million redevelopment of the ageing BP service station at the Woodvale Boulevard Shopping Centre, which included the addition of a McDonald’s restaurant, have been conditionally approved.

The BP at the corner of Whitfords Avenue and Trappers Drive will continue as a 24-7 BP with eight refuelling bays and include a Wild Bean Cafe, while the McDonald’s will also be 24-7 with a 50-seat restaurant and drive-through.

The existing workshop and car wash will also be removed.

While City of Joondalup officers had recommended the Metro Outer Joint Development Assessment Panel approve the plans, there was some opposition including from adjacent business owner Larry Chantivong.

Mr Chantivong said he believed his business Unique Thai Cuisine would be affected by the lack of parking and increased traffic created by the proposed development, and raised concerns with the staff car parking being next to the access way and “around a sharp bend”, creating a safety and traffic hazard.

He urged the developer to redesign the plans to provide appropriate parking and a second exit.

Resident Suzanne Apps also raised concerns with traffic flow when cars were queued in the McDonald’s drive-through or at the fuel pumps, given there were no parking bays included with the service station, or when delivery and refuelling trucks are parked on site.

Ms Apps also asked why the approved multi-storey medical centre for the site had not been taken into account as it would also increase traffic, and why noise and odour assessments had not been done as residents lived less than 50m away.

She said despite the service station already operating 24-7, the addition of a 50-seat capacity fast food outlet was a “completely different” type of business and would have “a noticeable difference in noise levels in the later hours rather than the current impact of a quiet small service station”.

Josh Watson, of Planning Solutions, said the current BP had existed for 30 years and was a “long-standing and continued use” that was “entirely appropriate for the site”. 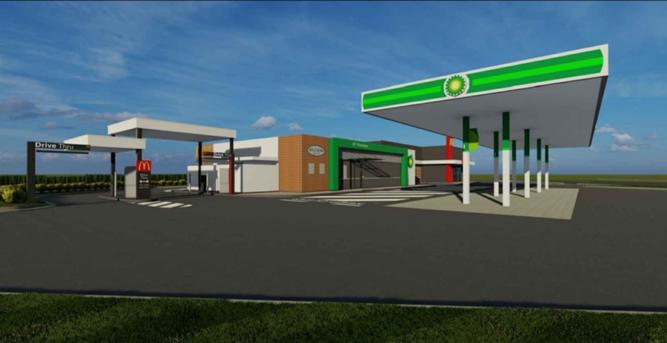 He said the traffic reports were supported by the City and the “minor increase in traffic” generated by the development would be “negligible in the context of the shopping centre”, and the removal of the workshop would improve the blind corner by improving sight lines and access.

He also said the location of the staff parking would reduce the short-term use of those bays next to the access way.

Mr Watson also reiterated because the service station was an established 24-7 business, noise and odour did not need to be considered but would have to comply with regulations.

The fuel pumps would be located underground and the upgraded plant material was expected to reduce noise, while the plant equipment for the McDonald’s would be screened on the roof and the order speakers would be located away from residences.

Mr Watson said the “creative design” responded to the site’s “peculiar shape” and would complement the “established community setting”, with the service station layout consistent with what currently existed.

She was satisfied the site would be able to work and the conditions of approval would address the concerns raised.

While Joondalup councillor Nige Jones said the site was “in desperate need of redevelopment”, fellow councillor Suzanne Thompson said she could not support it, believing the traffic, parking and congestion issues would create “a perfect storm, and more often than not”.

Presiding member Ian Birch said a fast food outlet and service station operating together was “not a one-off” and it would not be in their best interest for them to have poor access because “that’s what they rely on”.

The application was approved 4-1.

Since the approval, a 340-siganture petition has been presented to the Joondalup council requesting the City undertake a safety and congestion review of Trappers Drive between Woodvale Drive and Whitfords Avenue for both vehicles and pedestrians.

It requested the review focus on the entry and exit at Woodvale Boulevard Shopping Centre on Trappers Drive and be completed within two months.