Fuel prices have reached a 13 year high, but the skyrocketing price of petrol has left at least one electric car owner counting his savings. And they are huge.

Nigel Raynard has owned a Tesla Model S for a little over three years, and runs an airport pickup business . In July, we reported that after driving 400,000km he is still on this first set of brake pads.

Now, he says, he has saved more than $100,000 in fuel costs in that time in a response to a call for a more rapid shift to EVs by veteran journalist Quentin Dempster.

Raynard responded: “Yet almost every media story is full of people fighting to the death for their internal combustion powered relic. Pedalling the latest propaganda, like it’s truth.

Raynard has now shared his calculations with the Driven, underlining the fact that the official fuel consumption figures we see on vehicle windowscreens rarely equate to actual real-world consumption (and the same is true for electric vehicles).

But the difference between combustion engine vehicles and electric vehicles of course, is that the latter is not dependent on the price at the bowser, which according to this well-known fuel-price app hit an average of 190 cents per litre on Monday. 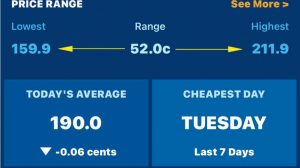 “Average fuel consumption in AU of 13.4 litres per 100km travelled at $1.80 premium unleaded price,” Raynard, who has driven another 26,000km since July, wrote in a note to The Driven.

“This means I would have used 57,218 litres to travel 427,000km. The quoted figures for a luxury premium sedan of around 8-11 litres/100km are rubbish,” he said, adding that his energy/fuel consumption figures are always higher because he carries passengers and luggage for a living – which means switching to an EV has benefited him even more than the average driver.

Once you load up a car with passengers and luggage you use ~30% more than their testing data,” he says.

He adds (and as mentioned in our previous article on Raynard’s experience) that his business has also benefitted from much-reduced maintenance costs, including the complete lack of $100 average oil changes.

“I think that car servicing is much overlooked,” he says. On his last car, he drove 170,000km with an oil change every 5-10,000km (depending on age) that he did himself. Averaged that at around 20 oil changes is another $2,000, and that’s not including labour costs.

With regards to charging costs, Raynard notes that he has been fortunate to have free Supercharging (Tesla originally gave early adopters lifetime free charging and a free 1,500km worth of charging to those who referred new customers – both have since been dropped by the EV maker).

But, he notes, EV owners still have the option to charge for free at certain public chargers, or at home if they have solar on the roof. If in a rush there is always the option to use a more expensive ultra-fast charger.

“Yes, the beauty of EV is when you have time, and are making less money, you can spend more time charging for free. But when time is stretched, you have the option to pay more,” says Raynard. 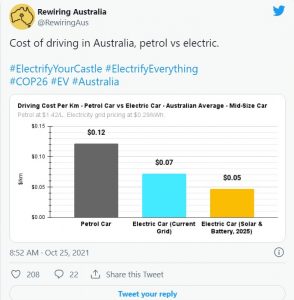