The brand said volume production of electric trucks would begin next year “in some markets”, likely based on the 2019 electric Elf walk-through concept van that this year was brought to Australia from Japan in its first overseas showing.

Isuzu Australia Ltd chief of strategy Grant Cooper said the EV plans would include seeking out “the best tech for the future”, including battery-electric and hydrogen fuel-cell.

The company is in alliances with Honda to develop fuel-cell power units for Isuzu’s bigger Giga truck series, but indicated that this was a ‘short term” partnership.

Isuzu’s longer-term agreements are with Volvo Truck for technology, and with Toyota and Hino for next-generation small-truck development in battery EV, fuel-cell and autonomous driving systems.

“Elf EV is more a light-duty pick-up and delivery truck for ‘last mile’ duties,” he said.

“Australia is the only market to see this outside of Japan, which speaks of the extremely high regard Isuzu has in the Australian market.

“It has a 150kW, or 200hp, motor developed for short haul applications. It is a concept that is continually being upgraded, starting with a battery energy density of 180 Watt-hours per kilogram and now developed to 260Wh/kg.

“That’s a 20 per cent increase in performance year-on-year and at the same time, we have seen the cost of components fall by 18 per cent.”

Mr Cooper said a feature of the Elf was its ‘saddlebag’ placement of the batteries, mounted on either side of the frame rails rather than in the centre. 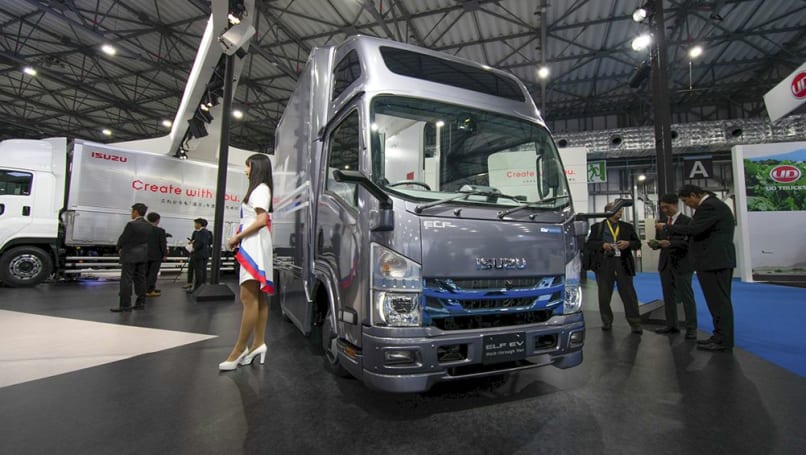 “This allows better space savings including the walk-through feature. So, via a swivel seat, the driver can walk to the cargo area and depart via a side door,” he said.

“This reduces possible injury to the driver. It also has a digital mirror system using cameras to replace the large external mirrors with internal screens.

“It also has advanced ADAS systems to reduce the probability of accidents.”

Mr Cooper said Elf was designed to suit short-haul, high density urban routes – much of the same environment intended for Isuzu’s partnership with Australian EV truck component company SEA Electric – and that it would not be seen out of place “zipping around Melbourne or Sydney urban areas supporting larger truck fleets”.