A new highway petrol station which will aim to offer cheap fuel as well as a full food service to residents and travellers has been approved for the Far North.

MAREEBA will be home to a big new service station – just 1.4km from an existing Puma Service Station on the Kennedy Highway east of the township.

Shanti Sutariya of Redlynch-based Sutariya Brothers Pty Ltd will build a service station on the corner of Malone Rd and the Kennedy Highway, 4km from Mareeba, with Mareeba Shire Council approving the development application at its meeting on Wednesday.

Mareeba will certainly be well catered for with 10 petrol stations already operating in the vicinity.

Plus, there is a giant United Petroleum station on the Kennedy Highway at Koah which is open until 8pm and has B double truck access and high flow diesel pumps.

But Mr Sutariya is confident his business will be welcomed by Tablelands locals and said he would seek to employ about six people. 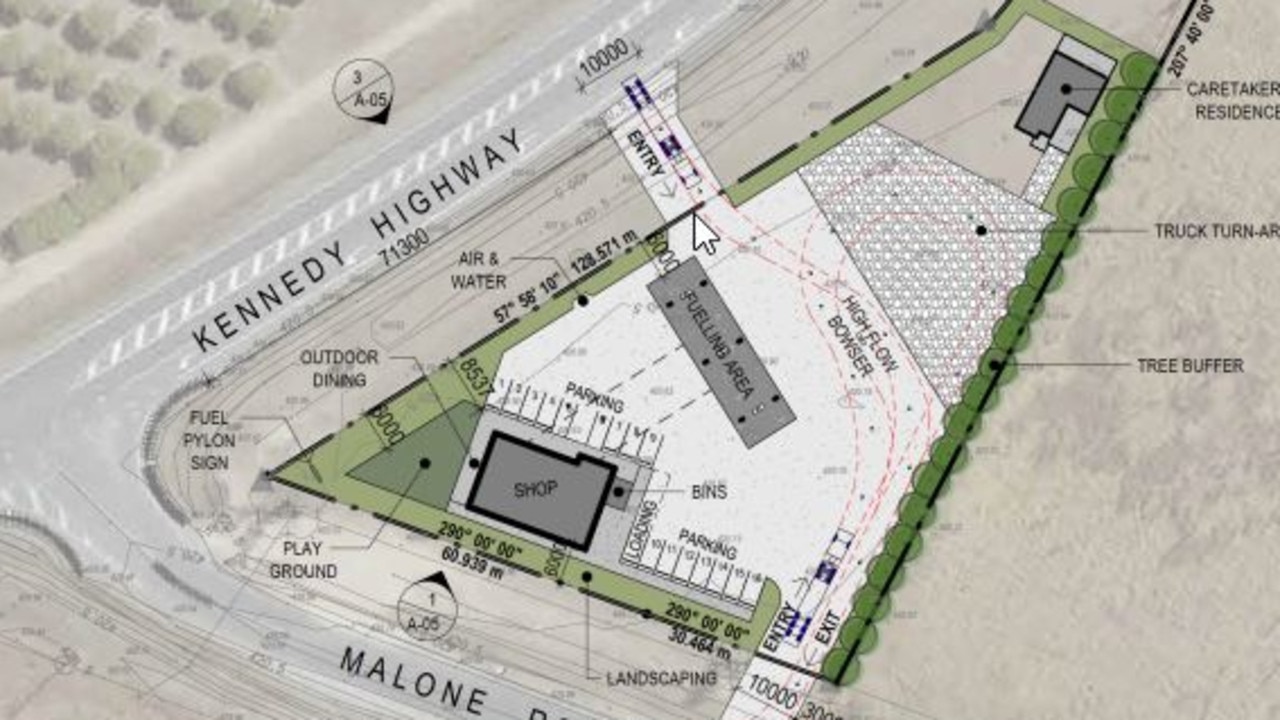 A plan of the proposed service station at Malone Rd, Mareeba. Picture: supplied.

“We believe we have answered all the concerns of council,” Mr Sutariya said.

“We will go for the cheapest fuel available in the Atherton Tablelands region and a big store as well,” he said.

With a background in commerce, he currently has the IGA Cairns North and previously operated IGA Cairns Esplanade.

“We will be looking for full time employees, three in the morning and two in the afternoon, we want to do a full food service with breakfast, lunch and snacks, we have the space for trucks, and we hope to cater to the local farming community, all the labourers,” he said.

“We are negotiating with different brands, but it will be independent, not a franchise, and we will have a big store with bread and frozen items, if we get the market we can get stock from the same warehouse as IGA.

“It will be similar to the Spence St Mobil.”

He believes the economic future of the Tablelands is bright.

“Lots and lots of people are moving to Mareeba, since Covid hit, blocks of land that were not selling are now really moving, and you can’t get a rental there,” Mr Sutariya said.

The development application states there will be caretaker’s accommodation on the premises.

“The service station store is well appointed to cater for travellers and locals alike, with a commercial kitchen and cafe facilities to provide meals and coffees for patrons to consume on site if they like with indoor and outdoor dining areas provided,” the application states.

“Adjacent to the dining areas there is a kid’s playground area to cater for travelling families, strategically positioned on the street corner to activate the retail building frontage.

Council sought further information on water, waste water disposal and a traffic impact assessment as well as evidence of landscaping buffers and treatments along the southeastern boundary of the site to minimise potential impacts on any future residential use of allotments.

Land around the 7,448sq m property is are unimproved rural residential lots, with agricultural rural lots on the opposite side of the highway.

Extracted in full from: https://www.cairnspost.com.au/news/tableland/mareeba-shire-council-approves-new-petrol-station-on-kennedy-highway/news-story/6361b1de4eeaab9989d0fc41b0563aaa