Under clear blue skies, we parked our cars and prepared for the onslaught of questions from the general public.

Majella and I must have talked to over 100 people each during the day. First, we stood around the car and then as the heat increased, we sat in the car with the air-conditioning going and played with the screen, told stories and satisfied curiosity. 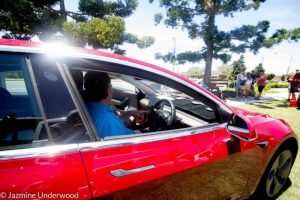 It is estimated that around 100 test rides were coordinated by Give it a Whirl, and around 800 up to 1000 people came through the site. 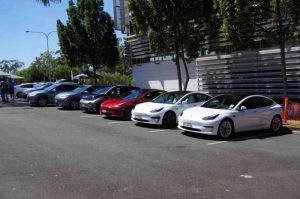 The days’ meet up was ably organized by Solar Citizens/Charge Ahead and the Australian Association of Electric Vehicles (many of whose members brought their cars for display). The Australian Conservation Foundation and Tesla Owners Club Australia were also represented, as were Trakpro E-Motion Concepts EV Hub, EV Automotive and Regenev. 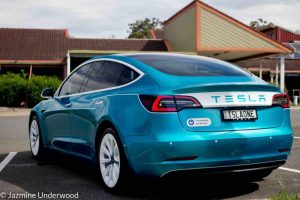 Q fleet brought along an EV and a hydrogen vehicle. The electric bus was very popular as it was a comfortable air-conditioned place to chat and learn about electric public transport – thanks to Logan coaches and Cavbus.

On the way to the event it was obvious Christmas was coming – all the petrol prices had gone up! Premium high octane hit a record of over $2 a litre. Now is the time to go electric. One visitor to my car complained that he had a car with a 100 litre tank – hit had cost him over $200 to fill up. That’s more than I paid for my first car, he said.

We lined our cars upon the grass near the Logan Central Community Centre. We chatted with old friends (this is our third such event in as many months) and made some new ones. I was amazed at the number of cars and owners that were there whom I had not yet met. More stories to write and more for you to read.

A very persistent gentleman tried to persuade me to have a go on his electric unicycle. Don’t think he had any other takers as I only saw him riding during the day.

People sat in the electric bus and questioned the driver and the manager who patiently answered them (it was very cool and comfortable – just needed a trolley lady with chocolate frogs to make it a perfect venue.) 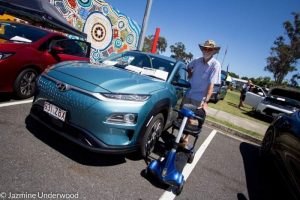 The perfect ending to an exhausting yet exhilarating day was the pint of Furphy’s beer at the Tavern with Arran and Sam from ReGenEv – this is becoming a most welcome tradition.

Extracted in full from: The curious give electric vehicles a whirl as pre-Christmas petrol prices heat up (thedriven.io)