When EVs take over our roads and demand for petrol dries up, what will happen to service stations?

Every day, on average, Australia’s 7,000 or so service stations sell about 90 million litres of petrol and diesel — a river of fuel that has been flowing for more than a century and keeps over 55,000 people in work.

But over the coming decades, the flow of what the industry collectively calls “motor spirit” is going to slow to a trickle, and may even dry up entirely. 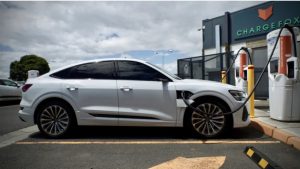 Others are more bullish.

“We’ll sell fairy floss to put in people’s cars if that’s what they want to drive,” he says.

So what’s the future of your local servo?

To survive, the service station will have to change.

In 2019, market research company Boston Consulting Group (BCG) studied the global fuel retail industry and published a report that sent shockwaves through the industry: when most cars were EVs, it said, most service stations would be unable to turn a profit.

Under the most extreme scenario, 60 to 80 per cent of service stations could be unprofitable by 2035, unless they change their business models.

“It is a big change and I think it’s something all of the petrol stations will need to think about carefully and prepare for,” says Anita Oh, BCG’s managing director.

“But it’s also a big opportunity.” 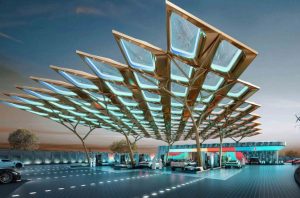 The industry will have to radically reimagine the purpose of its strategically located roadside real estate.

The big question is this: Without fuel, why would anyone go to a servo?

Australian trials show about 80 per cent of EV charging occurs at home.

Service stations will no longer have a monopoly on energy transport; even the charging done outside of the home can take place in a supermarket carpark while you’re buying groceries. 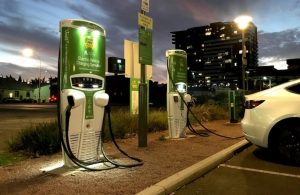 This month, the chief executive officer of the global EV charging station company Tritium told an Australian infrastructure summit that petrol stations are facing their own “Kodak moment” — a reference to the camera-film giant that went bankrupt with the switch to digital cameras.

“In the last year or so these conversations have started to accelerate.”

‘We’ve got some who say it’ll never happen’

Although the conversations about the threat of EVs to the fuel retail business model have become more urgent, they’re not new.

The fuel industry was contemplating this back in 2015.

That year, fuel wholesalers and retailers gathered at a Sunshine Coast conference centre for their annual get-together, including a chat about EVs.

Only a few thousand had been sold in Australia so far, but a presentation led by a futurist and an architect specialising in service stations asked the assembled executives to open their minds and consider the possibility of a “post-normal” world in which EVs were commonplace.

The presenters asked: “In 20 years, people living in this future world — why are they going to stop at a service station?”

They wouldn’t, they said. But they might stop at a “community hub”. 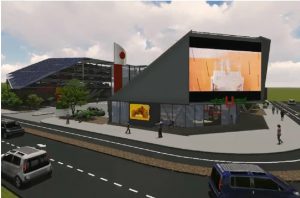 Under current policy settings, government modelling forecasts EVs will make up 30 per cent of new car sales by 2030, with uptake accelerating as EVs fall in price and public charging infrastructure is rolled out.

For Australia to meet its commitment of net-zero domestic emissions by 2050, almost all transport will have to be electric.

Mark McKenzie, the ACAPMA chief who organised that 2015 conference, says the industry is split on what to do about the change.

“We’ve got some people who say it’ll never happen — not in our lifetime,” he says.

“There are other groups who say we have to get on to this, we don’t want to be left at the starting blocks.”

Fuel is going to decline: Ampol

One fuel retailer preparing for change is Ampol, which operates just under 2,000 branded service stations in Australia.

“It certainly has received very significant focus from the middle part of last year,” he says.

“Clearly fuel is going to decline over time. We want to position the business to play a role in repurposing its assets so that it could distribute future forms of energy to our customers.”

So, what’s the solution? 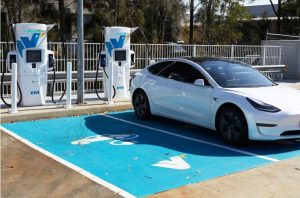 In July, it announced it was installing over 400 EV fast chargers at 121 service stations around Australia, as part of a $7 million funding agreement with the Australian Renewable Energy Agency.

“We’re also exploring batteries and having the ability to use the power on site through charging … and dispatching back into the grid,” Mr Halliday says.

Stations in dense inner-city areas or situated on busy country highways are likely to be the most viable: each will have a large captive market for public charging facilities. Suburban service stations, meanwhile, will find it hardest to compete with home charging.

About 20-30 per cent of service stations’ industry-wide revenue is convenience and grocery sales like chips and drinks.

Servos will become more like neighbourhood stores, cafes and restaurants, which has been a trend since the 1990s.

So how many servos are likely to be around in 20 years’ time?

“There’s still too much uncertainty to have real clarity,” Mr Halliday says.

‘I don’t think EVs are going to take over fuel’

Many service stations are independently owned, and they don’t necessarily have the money to “pivot” their business.

These owners and operators now find themselves in a tricky situation; they’re being told their world is about to change and they have to prepare, but can see little evidence of disruption, or reason to act.

Some are just ignoring the threat, says MTANSW’s Mr Yallouridis.

“They’ve been accustomed to just providing fuel and small groceries,” he says.

“When you talk to them, they’re quite stagnant in their vision about what they’re going to do.”

At the same time, they’re worried.

“Some of these are family businesses and they’ve got the younger generation growing up thinking about succession planning and the future.”

Diann Melas is the operations manager with Budget Petrol, which supplies 60 independent service stations around NSW.

Of these, only one station in Goulburn has an EV charger.

“It’s not something people are coming in and asking for,” Ms Melas says.

She’s aware of the talk around a long-term decline in fuel sales, but thinks that’s still many years away, and may never arrive.

“I don’t think EVs are going to take over fuel. Not in my lifetime,” she says.

“You sign a service station lease today for 20 years and you say in 20 years’ time are we going to be selling fuel?

“The answer is yes, we’re always going to be selling fuel.”

If EVs make up 30 per cent of new car sales by 2030, more than 90 per cent of vehicles on the road will still be needing “motor spirit”.

“In the short term it means we lose 10 per cent of our capacity — that’s not a Kodak moment.”

Whatever happens in Australia, it’ll have happened overseas first.

Countries like Norway are at least 10 years ahead in EV uptake and already seeing an impact on service stations.

Speaking from Oslo, the Norwegian EV Association’s Snorre Sleetvold says service stations aren’t closing down — at least not yet.

“They have a high focus on building the next energy station — they’re shifting from being petrol stations to being energy stations.

“They are building lounges, because when you put a car on a charging station you maybe need to sit down for 40 minutes, and they’re building a type of restaurant and a place to work.” 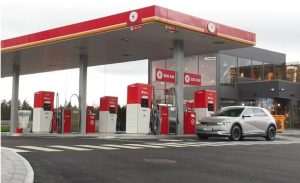 This sounds a lot like the design concepts for the “post-normal” future pitched at that Sunshine Coast conference back in 2015.

Whether or not any of it will work remains to be seen.

Most cars in Norway are still petrol or diesel, which means the impact of the switch to EVs hasn’t yet been properly felt.

“The number of pure gasoline stations will fall dramatically in the next 10 years,” Mr Sleetvold says.

MTANSW’s Mr Yallouridis plans to travel to Norway next year for research.

“There’s a cultural shift that needs to be done by the entrepreneur, the business owner,” he says. 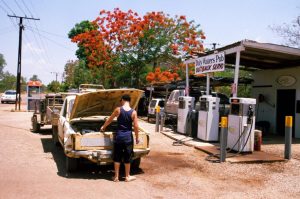