Service stations across the country have introduced buying limits for an essential product as demand soars amid fears of a shortage.

Service stations are limiting how much AdBlue customers can fill up with as demand soars amid fears of a shortage of the essential product.

The world is currently facing a shortage of urea, a key ingredient found in AdBlue, which is injected into the exhaust systems of modern diesel vehicles to reduce emissions, and is also a large component in fertiliser.

The transport and agriculture industries have warned that without it, trucks could be unable to transport essential items such as fresh food to supermarkets.

BP Australia is restricting the amount of AdBlue per transaction at service stations to ensure supply in the immediate term.

“The situation is changing very rapidly and with little notice, and we are working closely with our suppliers and carefully monitoring stock levels to try and reduce any potential impact,” a BP spokesman said. 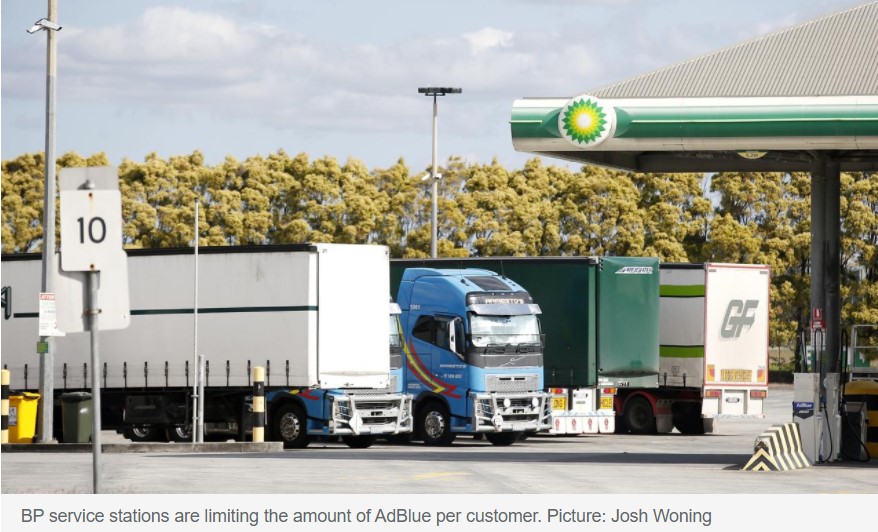 Ampol and Caltex service stations, which are transitioning over to the Ampol name, are also asking customers to limit how much AdBlue they buy.

“Ampol has put up signs at sites explaining the shortage of AdBlue and asking customers to limit their purchases,” a spokesman said.

The government revealed last week there were 15 million litres of AdBlue on hand, equivalent to almost five weeks of business-as-usual demand, and said shipments of refined urea were on their way to Australia to provide two more weeks of supply.

The National Farmers Federation has been told new supply has been secured from Indonesia and the Middle East.

“This now must be business-as-usual in terms of AdBlue supplies on hand, noting its very short shelf life.”

China, which previously supplied 80 per cent of Australia’s urea supplies, recently halted exports to boost its own supplies domestically.

“Ministers have spoken with a number of international counterparts and our diplomatic network is engaging with suppliers of refined urea in a number of countries and are connecting Australian AdBlue manufacturers with these suppliers,” a spokesman for Industry, Energy and Emissions Reduction Minister Angus Taylor, who is overseeing the issue, said.

“This is to ensure Australian AdBlue manufacturers’ requirements are met both in the immediate and for the longer term.”

Australians were encouraged to operate as they normally would with “responsible purchasing behaviour.”.

Last week South Korea made an agreement with Indonesia to receive around 120,000 tons of urea per year over the next three years.

Supercheap Auto brought in customer limits of 20 litres per customer for stores that still have stock, according to the Financial Review.