E-fuels lose race to clean up cars: Study shows them to be as polluting as petrol

Despite efforts by the fossil fuel industry and some car suppliers to convince the world of their benefit of e-fuels, or synthetic fuels, a new study has shown that they do nothing to alleviate air pollution problems.

The study says production of e-fuels is a costly and counterproductive process which turns electricity into hydrogen which is then combined with CO2 to produce liquid fuel similar to petrol or diesel for use in internal combustion engines. 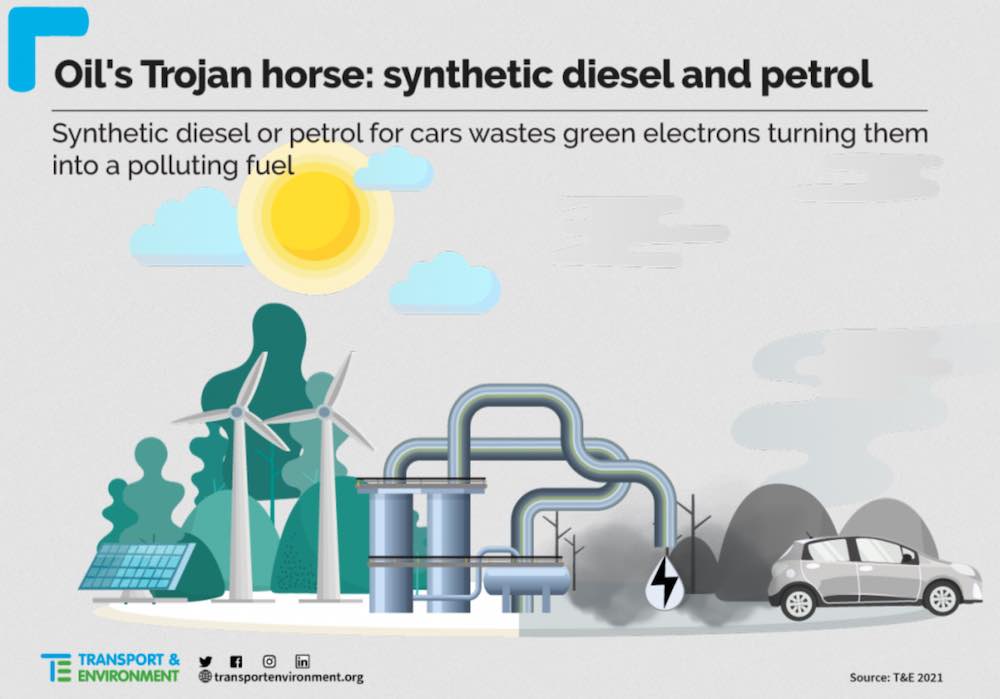 In addition to production costs, running a car on e-fuels over five years will cost a driver €10,000 ($A15,800) more than running a battery electric car. Running a second-hand vehicle is similarly expensive, costing a driver around the same additional €10,000 mark.

The report names Bosch, Porsche, and Europe’s oil lobby FuelsEurope as “pushing for synthetic petrol and diesel, or “e(lector)” fuels instead of the proven technology of battery electric vehicles (BEVs).

“Its proponents claim that if renewable electricity is used and CO2 is captured from the air, then the e-petrol and e-diesel are climate neutral fuels that will also reduce pollution,” the report explains. “So the argument goes: instead of decarbonising engines, why don’t we decarbonise the fuel itself.”

However, T&E commissioned French public research organisation IFP Energies Nouvelles to run a series of lab-based tests which simulated real-world driving t measure the emissions of different types of e-fuel blends in an A-class (A180) Mercedes.

Ironically, even acquiring such e-fuels for testing was problematic, with IFP Energies Nouvelles unable to purchase the necessary e-petrol to perform the tests due to a lack of commercial production.

Instead, IFP Energies Nouvelles had to blend three e-fuel blends representative of potential future fuels that are compatible with ICE vehicles. For the testing, two different 100% e-petrol blends and one blending 2nd generation ethanol (10%) and e-fuel were made.

Testing by IFP Energies Nouvelles found that a car running on e-petrol emits equally high levels of NOx as a standard E10 EU petrol and significantly more carbon monoxide and ammonia. And while particle emissions are considerably reduced, more than two billion particles are still emitted for every kilometre driven in an e-petrol powered vehicle. 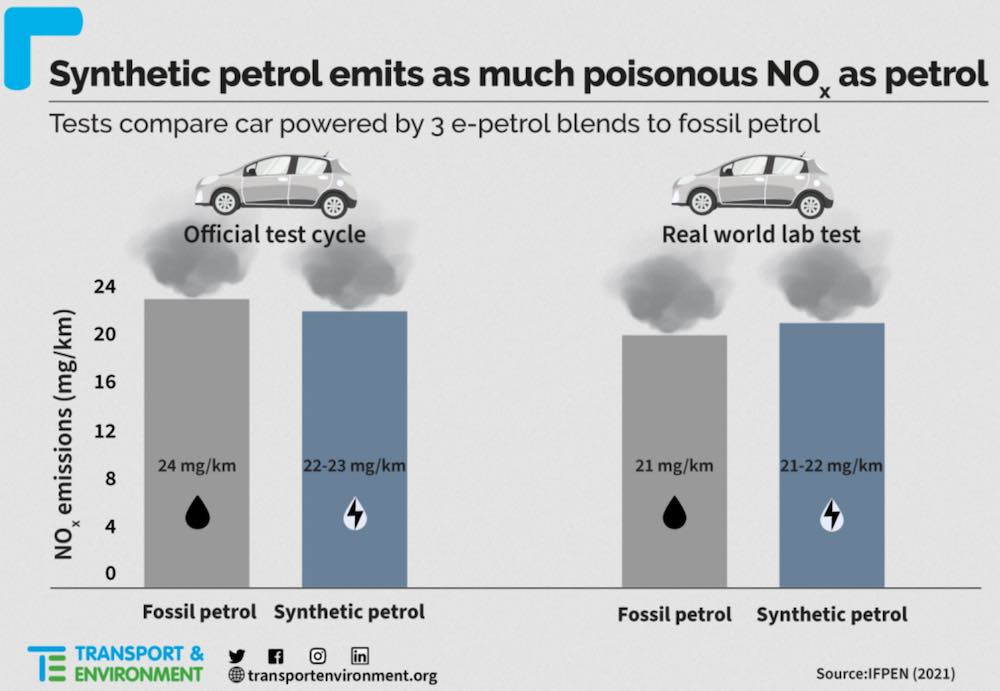 When burned, e-fuels cause almost three times more carbon monoxide compared to petrol, while an e-fuel powered car also emits up to two times more ammonia – which can combine with other compounds in the air to form particles known as PM2.5, for which there is no safe level of pollution, and which has health risks including asthma, heart disease, and cancer.

No amount of spin can overcome the science of burning hydrocarbons,” said Julia Poliscanova, senior director for vehicles and e-mobility at T&E.

“As long as fuel is combusted in engines, toxic air will persist in our cities. Lawmakers who leave loopholes for e-fuels in emissions targets are condemning the public to decades more of avoidable air pollution.”

“E-fuels have lost the race to clean up cars, but in truth it was never even close,” Poliscanova added.

“Battery electric cars offer drivers the cleanest, most efficient and affordable way to decarbonise, while synthetic fuels are best suited to planes where electrification is not an option. The credibility of Europe’s clean car policy is on the line and any diversion into e-fuels is a new lease of life for old polluting engines.”

Extracted in full from: E-fuels lose race to clean up cars: Study shows them to be as polluting as petrol (thedriven.io)