Electric car charging stations to be as common as petrol stations

Fast charging stations will soon be popping up everywhere and could become as common as traditional petrol servos.

More than 1000 fast charging stations for electric vehicles will be operating within five years — and could become as common as petrol servos within two decades.

Plans by federal and state governments, as well as private retailers, show publicly-accessible places to “fill up” zero-emissions cars are about to surge, helping to reduce range anxiety.

The Electric Vehicle Council says while there are currently 6500 petrol stations in Australia compared to 244 fast EV charging sites, the number of EV fast charge points should quadruple within about five years.

Fast charging points are more expensive to use, but have the ability to recharge a 500km range EV in as little as 15 minutes, depending on the model.

Head of energy and infrastructure at the EVC, Ross De Rango, said based on a 40-50c per kWh price, a ‘full recharge’ would set motorists back about $30-$40.

“The ideal future state is that public EV chargers are deployed with similar coverage to petrol stations today,” he said.

“We know that most EV charging will happen in people’s homes, but for those who can’t charge at home, there will be a need for fast chargers in the urban areas.

“For all of us when we’re travelling, there will be a need for fast chargers on highways and in regional towns.”

There are currently about 46 sites with 115 charge points in Victoria, but the State Government recently announced a $5m grants program to expand the network by 50 locations.
This is part of a $100m suite of initiatives designed to speed up a transition to EVs through infrastructure and subsidies.

The Federal Government also has a $72m program to deploy fast chargers around Australia.

This year, oil refiner Ampol revealed it would install renewable powered charging points at 121 of its petrol stations.

It said at the time it expected EVs to “gradually displace internal combustion engines” with small cars first to switch.

Mr De Rango said states should follow the lead of NSW which was promising a charging point within 5km of home in urban areas and every 100km “on the open road”.

Residents of Melbourne’s outer suburbs are predicted to be the early adopters of electric cars, new RMIT modelling shows.

The data reveals where the EV car take-up will occur strongest – and it’s in the growth corridors, not the inner-city.

It’s because people in outer suburbs were more concerned about fuel costs and many householders had solar panels so they can generate their own power, reducing costs even more.

Growth in EV ownership is expected to grow fastest in growth corridors such as Cranbourne, Werribee South, Wyndham Vale, Truganina, Doreen and Mickelham.

By 2030, it is expected that one in four cars in Vic will be electric.

Victorian electric vehicle ownership has more than trebled in the past three years, from 3398 in 2018 to 10,311 by June this year, latest Department of Transport figures show.

Director of RMIT’s Centre for Urban Research Professor Jago Dodson said the current EV figure of just 1.8 per cent of the Victorian fleet was a “minuscule” amount.

But the acceptance of EVs meant that number would rise in the coming years, especially in Melbourne’s outer ring suburbs.

“There’s always been this assumption that the wealthier middle and inner suburbs citizens would adopt EVs, even as a prestige thing, but there is a certain economic pragmatism in more car-dependent suburbs,’’ Prof Dodson said.

“There’s also a correlation with home with solar panels here too. Homeowners can see that they can generate their own fuel for their car.’’

He acknowledged that range anxiety was a genuine concern but new models could travel up to 400km on a single charge.

“When the average Melbourne commute is 25km, you would only need to charge once a week.’’ 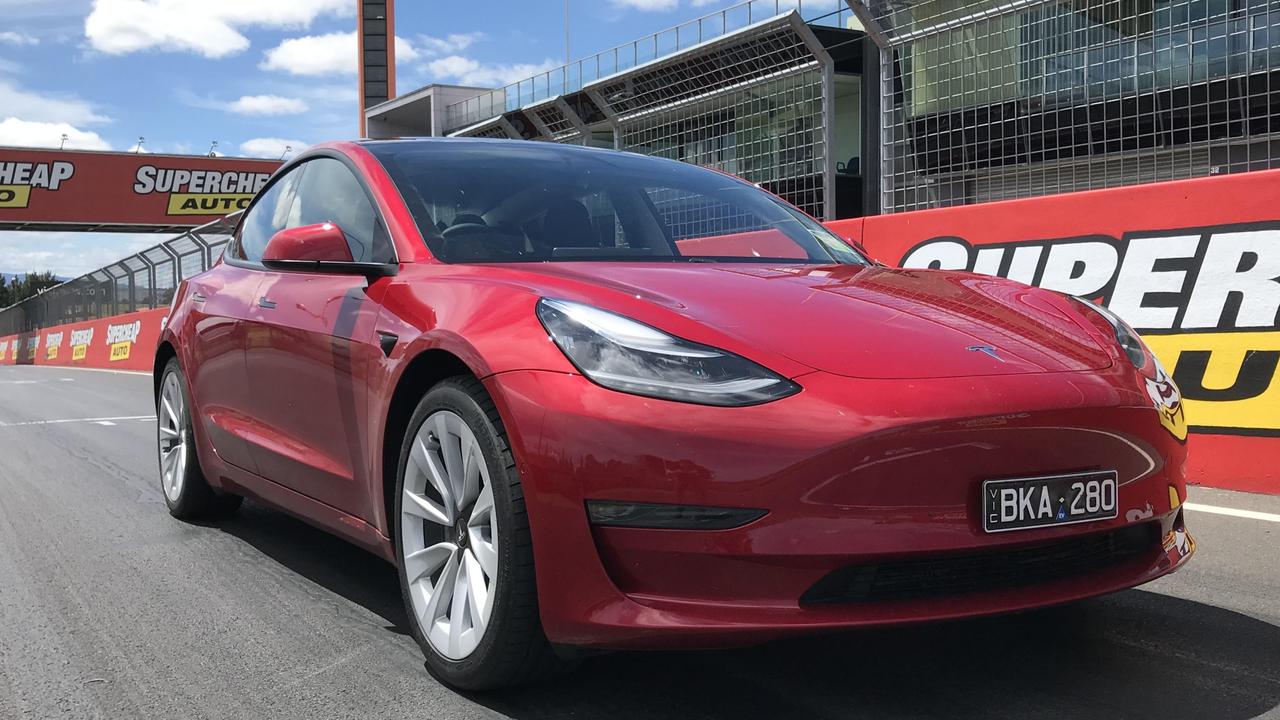 The Tesla Model 3 is the top-selling EV in Australia.

Longer drives would require stops at fast-charging stations, he said.

“I would think you should be stopping for a break on a long drive anyway.’’

The Tesla Model 3 is the top-selling EV in Australia.

The Electric Vehicle Council is forecasting that number to rise to about 58 by the end of next year, but well short of the more than 400 in showrooms in Europe.

About one in four vehicles sold in Europe is now electric.

Prof Dodson said the federal government’s Future Fuels Strategy, announced last month (NOV) “won’t do anything” and that it had been left up to the states to take carriage of policies around investment and ownership of EVs.