At least 75 people have died after a petrol tanker overturned and exploded in northern Haiti, unleashing a fireball that swept through homes and businesses.

It is understood the tanker rolled while trying to avoid hitting a motorcycle, exploding into flames on Tuesday evening, local time, in the city of Cap-Haitien.

Dozens of bodies lined the streets of the explosion site, while locals rushed to the area with buckets to salvage any petrol from the truck.

Haiti is in the midst of severe fuel shortages and facing skyrocketing fuel prices, which has crippled hospitals, schools and businesses.

The situation also prompted both US and Canada’s governments to urge its citizens to come home.

‘We lost so many lives’ 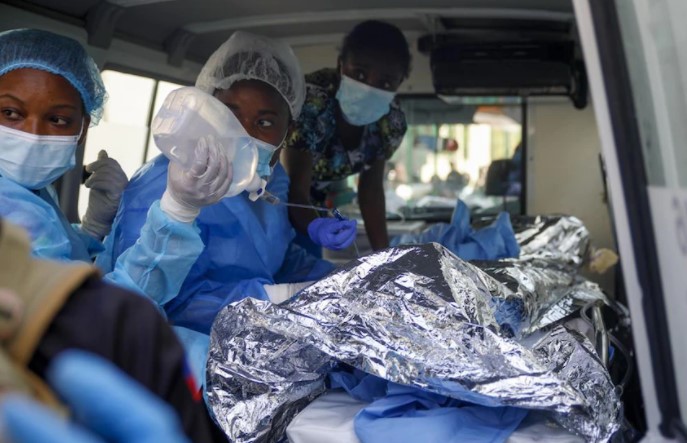 Buildings and overturned vehicles were still smouldering hours after the explosion, as firefighters covered the burned bodies and loaded them onto a truck.

Hundreds of Haitians watched on from rooftops in disbelief at the loss of life.

Prime Minister Ariel Henry, who is a physician, visited the victims in hospital who were bandaged head to toe or fighting for their lives.

“It’s horrible what happened,” he said.

“We lost so many lives.” 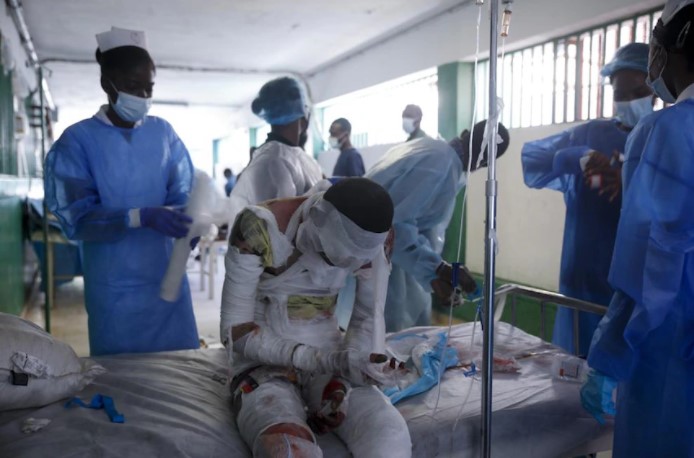 Among the survivors were Riche Joseph, who spent hours on the floor of Justinien University Hospital connected to a fluid drip while he waited for a bed.

Bruna Lourdes, Mr Joseph’s sister, said he had left their family home late at night to get food.

After hearing the explosion, she rushed from the hillside shantytown in panic.

“I’m praying to God that he won’t take his life,” Ms Lourdes said.

Abraham Joanis’s home was one of the 50 houses that caught fire after the explosion.

He carried around a guitar that he rescued from the charred remains of his home. 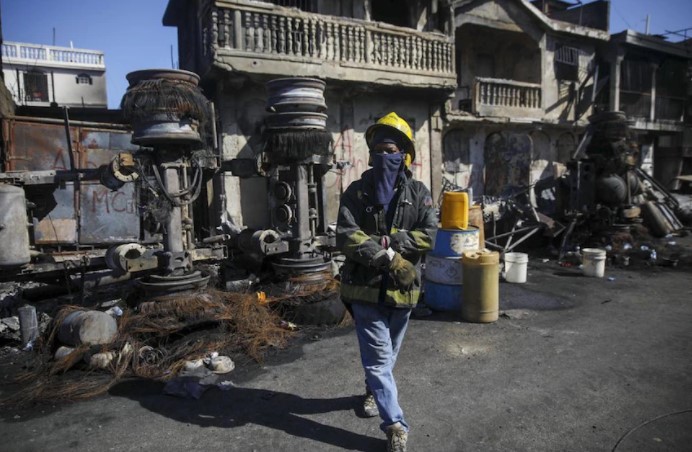 “Right away, I left with my family, and I headed the other way to the bridge,” he said.

Desperation in Haiti forced impoverished locals to scramble for petrol due to severe shortages, and this is being given as a reason for the high death toll.

Haitians have been on the brink since the assassination of President Jovenel Moise in July, as well as a 7.2-magnitude earthquake just weeks later that claimed 2,200 lives and destroyed tens of thousands of homes.

Haiti also has also seen a spike in gang-related kidnappings, including 17 US missionaries who were abducted in October.

Five have so far been released but 12 are still being held captive.

Hospitals not equipped for victims

Hospitals in Cap-Haitien seemed ill-equipped to handle the disaster and 15 victims were evacuated by air to hospitals in the capital, Port-au-Prince.

Some burns victims were being treated by teams from Doctors Without Borders.

“Surviving and recovering from a severe burn is a difficult process that requires specialised medical care, often for weeks or months,” Dr Ndong said.

“We will continue to receive patients according to the needs and our capacity.”

Prime Minister Ariel Henry was seen consoling a man who had collapsed on the hospital’s floor because there were not enough beds in the hospital.

The prime minister promised more help with field hospitals and a contingent of medical professionals.

Minutes after he left the facility, five more patients died.

“It is with a torn heart that I see the critical condition of some of our compatriots admitted to this facility.”