Electric vehicle owners will be able to have their hot chips and eat them too, with a remote West Australian roadhouse planning to install fast chargers that run on leftover fryer oil.

From January, a crowdfunded 50kW DC charger at Caiguna Roadhouse in the middle of the Nullarbor will plug the 720-kilometre-wide gap between charging networks being built by the WA and SA governments.

It will mean that when the respective “electric highways” are completed, an EV owner will be able to drive from Sydney to Perth without straying from the network of fast-charging stations, or having to stop for more than 90 minutes to recharge.

But what makes the Caiguna charger unique is the generator fuel.

Off-grid and unable to afford the up-front cost of solar and batteries, the roadhouse will generate low-emissions electricity through burning something it has been throwing out for years: leftover chip oil. 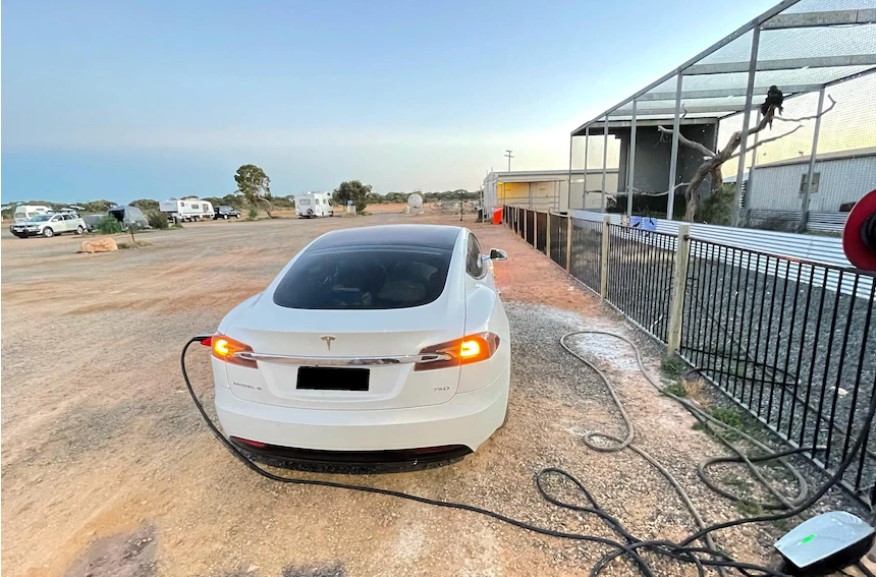 “It’s a fantastic idea — it’s just whether we can get that much oil.”

‘We can charge cars with that’

Mr Waugh, who lives in the small wheatbelt town of Dowerin outside of Perth, owns three Nullarbor roadhouses on the Eyre Highway.

For months, West Australian EV owners have lobbied Mr Waugh to host chargers at one of his roadhouses. 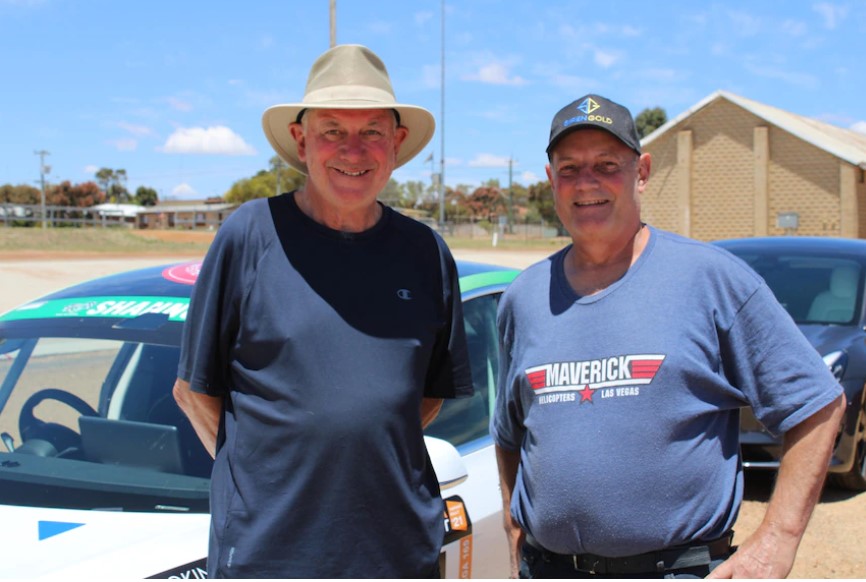 But the fuel merchant took some convincing, said Jon Edwards, a retired engineer who has been leading the push to “plug the gap” in the eastern and western charging networks.

“He said we don’t have any EVs out here — we make money out of diesel,” he said.

Then, one day in November, 66 EV owners drove out to Dowerin, where they hosted a barbecue, gave free rides to the public, and took the skeptical roadhouse owner for his first ever spin in an EV.

“He scratched his head, went for a drive and looked at the charger, and that’s when I said to him, ‘How much of this oil have you got?'” Mr Edwards said.

“I said, ‘You better start saving it up because we can charge cars with that.'” 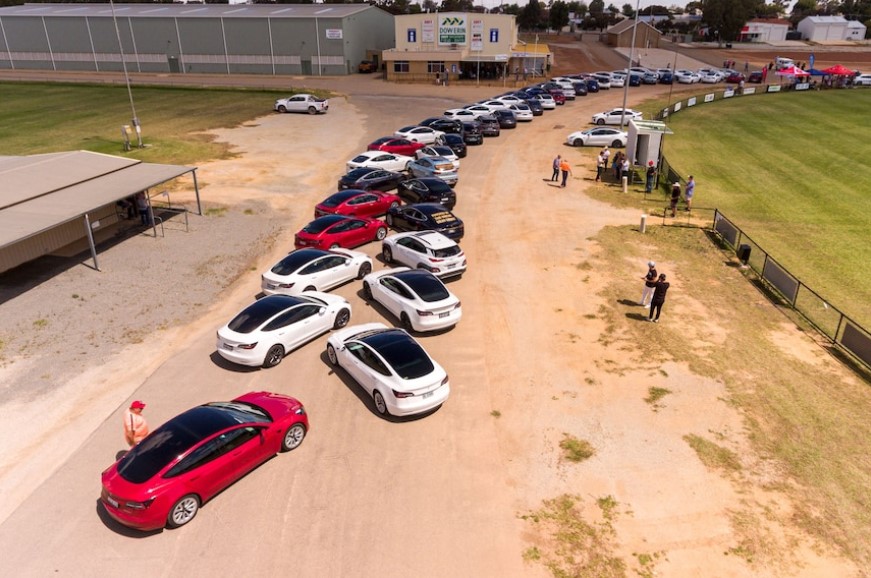 EVs on the Nullarbor? About ‘one a month’

Mr Waugh’s account of the day was slightly different.

“They weren’t crackpots, but they were bloody enthusiasts,” he said of the hoard of EV owners that descended on Dowerin.

“They’re so convinced about the future. They can tell you in so many years’ time you’re going to be driving one of these things.”

But he was swayed by the experience.

“With all the gizmos on them, they absolutely fly,” he said.

“I know electric cars are coming. I know they’ll want to traverse all of Australia.

“Providing we can replace the revenue lost through fuel sales with EV charging or something, then we’re still going to be viable.”

In early January, Mr Edwards and several volunteers will haul at least one biofuel EV fast charger more than 1,000km from Perth to Caiguna, with the aim of having it functional by January 16.

“I’ve already sent a 1,000-litre tank for them to load up with cooking oil,” Mr Edwards said.

“We have to filter out the crispy bits and settle out the rest for two weeks.” 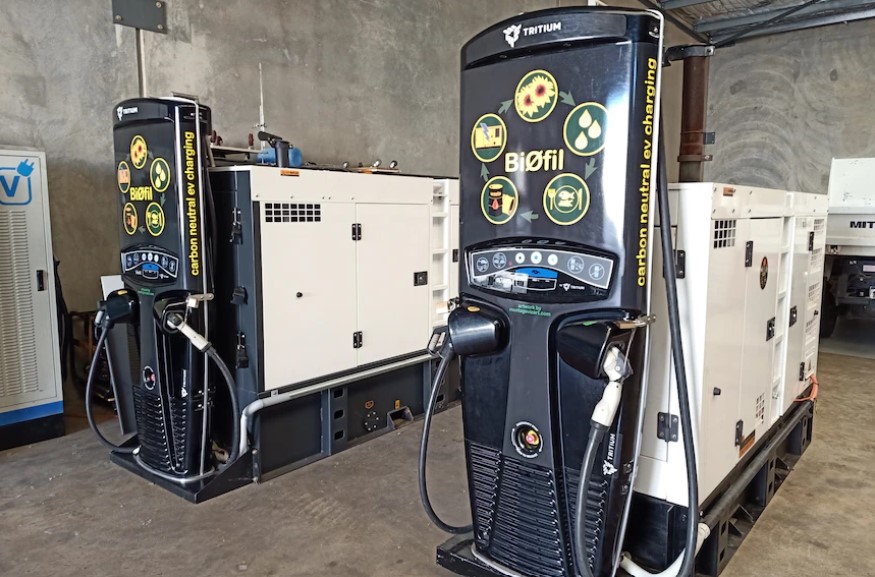 For the first few years, at least, there should be more than enough biofuel to power the generator.

“There’s about eight to 10 EVs a year going across the Nullarbor, or a bit less than one a month,” Mr Edwards said.

“We’re expecting that to increase once fast charging is out there.”

V owners crossing the Nullarbor currently use AC chargers running off roadhouse diesel generators. These chargers have a maximum power rating of between 7 and 11kW, depending on the car, and take 6-10 hours to fully charge a vehicle’s empty battery.

The 50kW DC fast charger will cut the recharge time down to about an hour and a half, depending on the size of the car battery.

“With this charger, you’ll be able to grab a burger and a coffee and have a read of a paper, and by that time, you’re ready to go,” Mr Edwards said.

Mr Waugh said the fast charger would be initially free to use.

“It’s not a revenue-raising thing,” he said.

Fast-charging on the Nullarbor is not a new idea.

In 2020, the government asked a team of EV experts at the University of Western Australia to prepare a list of potential fast-charging sites to make up a statewide “electric highway”.

The experts proposed eight 50kW stations along the Nullarbor, including two at Caiguna, for a total cost of about $420,000.

“It was more of a symbolic link that you would be able to drive to South Australia if you wanted to,” said Thomas Braunl, a professor of engineering at UWA and one of the report’s authors.

“The [state] government pretty much adopted what was suggested [in the UWA report], but a few of the routes have been deleted for cost reasons, I assume,” Professor Braunl said.

One of the omitted routes left a 720km-long, Nullarbor-sized stretch between the eastern edge of WA’s fast-charging network (at the town of Norseman) and the western edge of South Australia’s own “electric highway” (with a charging station to be built near the WA border).

Both states’ new charging networks are scheduled to be fully operational by 2024.

Electric cars have proven less popular in WA than elsewhere in Australia, with EVs making up about 0.8 per cent of new car sales, compared to the nationwide average of about 1.6 per cent.

The motoring lobby has blamed the lag on WA’s vast distances and lack of charging infrastructure. 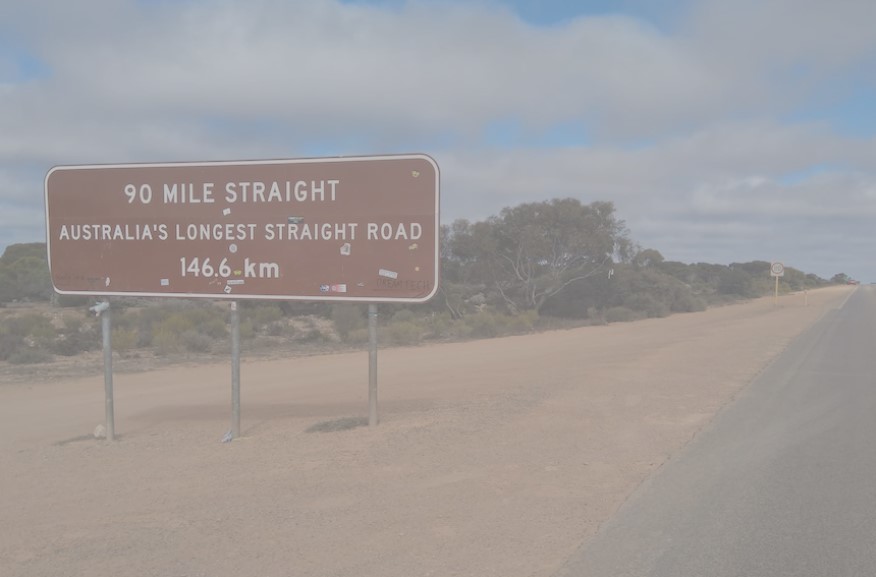 With money now being spent on charging stations, and the price of EVs dropping every year, this is expected to change.

Under current policy settings, EVs will make up about 30 per cent of nationwide new car sales by 2030, which means about one in 10 vehicles on the road will need access to public charging infrastructure.

This includes when crossing the Nullarbor, Mr Edwards says.

“Heaps of people over east have contacted me about it,” he said.

“I see it as an interim step now to get things moving. When there’s enough traffic to justify solar and battery, the biofuel generators become a backup.”

The cost of installing enough solar and batteries to meet the current energy needs of Caiguna has been quoted at about $500,000, Mr Waugh said.

“If it gets to around $250,000 we’ll look at going to solar, but how far in the future that’ll be that depends on battery technology.” 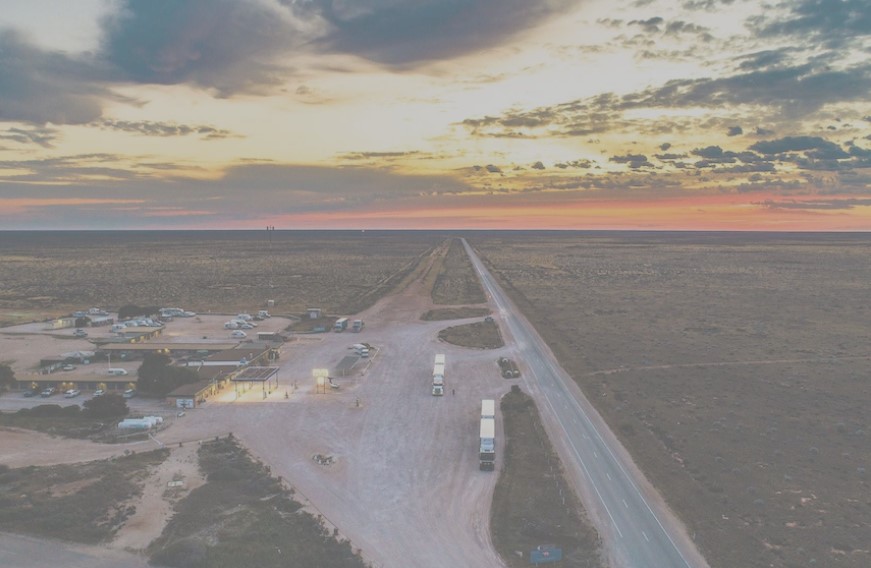 For the moment, the roadhouse gets its electricity from diesel.

According to Mr Edwards, the leftover chip oil “biofuel” used in the fast-charging generator is carbon neutral, as it’s derived from canola flowers that take CO2 out of the atmosphere.

Although some experts have called into question the clean energy claims of biofuels, running a generator on used chip fat pollutes far less than one that burns diesel.

“And the fuel is free,” Mr Edwards added.

“This is a solution for those roadhouses that are in the ‘too-hard basket’ with very low volumes of traffic and no business case to support solar and batteries.”

Mr Waugh said he could see that his roadhouse business was going to be “forced to make changes” with the switch to EVs.

“And surely they’ll buy something from us.”