Nine out of 10 new car sales will be electric in 2030, under Labor plan

The Australian Labor Party has stopped well short of announcing a ban on the sale of new petrol and diesel cars, or even a fuel efficiency standard.

Both are common policy decisions in Europe and elsewhere, But Labor’s climate and energy policy unveiled on Friday makes a truly remarkable assumption: By 2030, nine out of ten new car sales in Australia will be electric.

To put that assumption into context, electric cars – including plug in hybrids – currently make up just 2 per cent of new car sales in Australia, and more than half of those come from a single model, the incredibly popular, and available, Tesla Model 3.

Labor’s assumptions, revealed in the details of the modelling done by Reputex that supports its Powering Australia Plan (which also assumes an 82 per cent share of renewables by 2030), contrasts sharply with the forecasts of the Coalition government.

The Coalition assumes only a 29 per cent share for EVs of new car sales by 2030, begging the question of where exactly they think these cars will be sourced, given the massive shift to EVs in both stated country policies, particularly in Europe, and the electric plans of most of the Australian car makers.

Labor assumes 89 per cent of new car sales in 2030 will be electric, with about 16 per cent of that number plug in hybrids. So that is 73 per cent fully electric. Most of this increase appears to occur closer to 2030, but over the next eight years Labor anticipates an extra 2.15 million EVs on the road than the Coalition, including an extra 600,000 sales in 2030 alone. 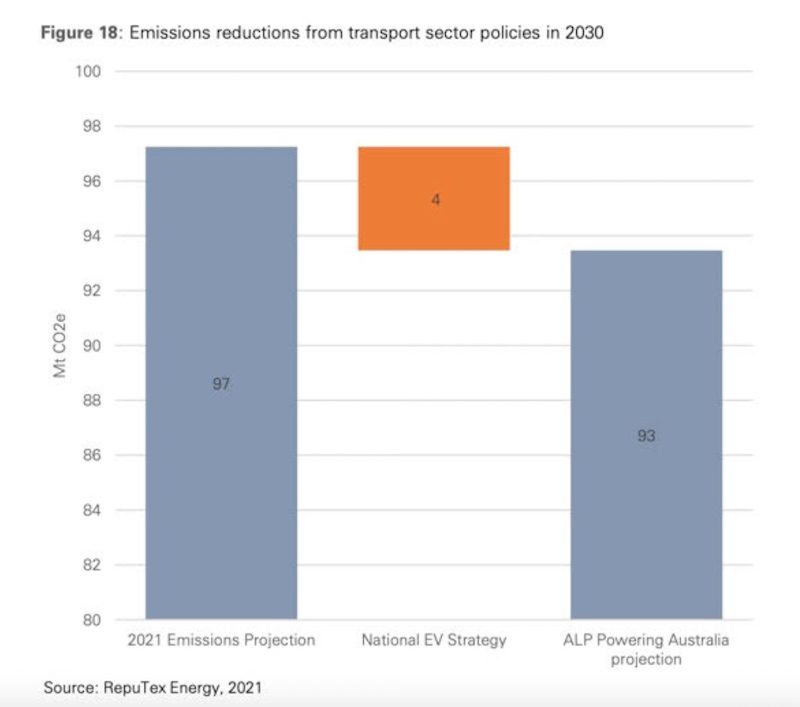 This graph above shows the scale – in terms of emissions – of what Labor is proposing compared to the Coalition. The Coalition’s so called “national EV strategy” (in orange) will result in the reduction of just four million tonnes. Labor’s will deliver 93 million tonnes.

How does Labor expect to achieve this?

First, it wants to make EVs cheaper. It will do this by providing exemptions on fringe benefits tax and import tax. According to its calculations, the import tariff exemption will save over $2,000 on models in the $50,000 range.

Secondly, it will seek to increase the number of models available in Australia, and the choice for customers.

The primary mechanism for doing this is to mandate targets in government fleets. It assumes that rthe Commonwealth fleet is large enough to underpin the introduction of 3 to 7 new EV models each year.  And it will create a vibrant second hand market.

The third mechanism will be in charging infrastructure.

Labor says it will work with states and territories to ensure that federally-funded infrastructure projects incorporate EV charging facilities wherever possible, and that all relevant properties owned or leased by the Commonwealth will be fitted with appropriate charging infrastructure;

It is also flagging the possibility of following the UK example and changing the National Construction Code to consider mandating charging infrastructure or electrical connections for all future infrastructure.

The irony is that – like its renewable energy assumptions – Labor is doubling down on the transition to green in the grid and on the roads from the policies it brought to the 2019 election.

This time, however, they are not so much targets as assumptions. The official target for a 43 per cent cut in emissions by 2030 is actually lower than the 2019 target, but this is for political reasons only.

The devil, and the delight, is in the detail. The 50 per cent renewable share touted in 2019 – and dubbed “economy wrecking” – has been nearly doubled to 82 per cent. But even the Coalition is assuming a 69 per cent share of renewables by 2030, and it’s not saying it’s going to wreck the economy.

And the EV share assumed in 2019 – also 50 per cent and supposedly going to ruin the weekend – has now also nearly doubled to 89 per cent.

Extracted in full from: Nine out of 10 new car sales will be electric in 2030, under Labor plan (thedriven.io)