It’s a political hand grenade of an issue in the US and now it looks set to dominate in Australia too. So far the attempt at a solution is laughable.

As the de facto federal election campaign continues to heat up, there has been one issue that has been high on the list of talking points for both the leaders of the major parties: the cost of living.

In this, Australia is no different to most of the rest of the world. Around the globe, high inflation is once again a key consideration for central bankers and government policymakers, as the rising cost of living threatens the fragile economic recovery from the pandemic and political fortunes alike.

As the rising cost of living weighs on the political fortunes of governments from Paris to Seoul, a number of different policies have been put forward to attempt to help households and businesses.

But among all the cost of living pressures, the one that is raising the most eyebrows in the halls of power, as well as arguably providing the greatest cause of concern for consumers, is rising petrol prices. 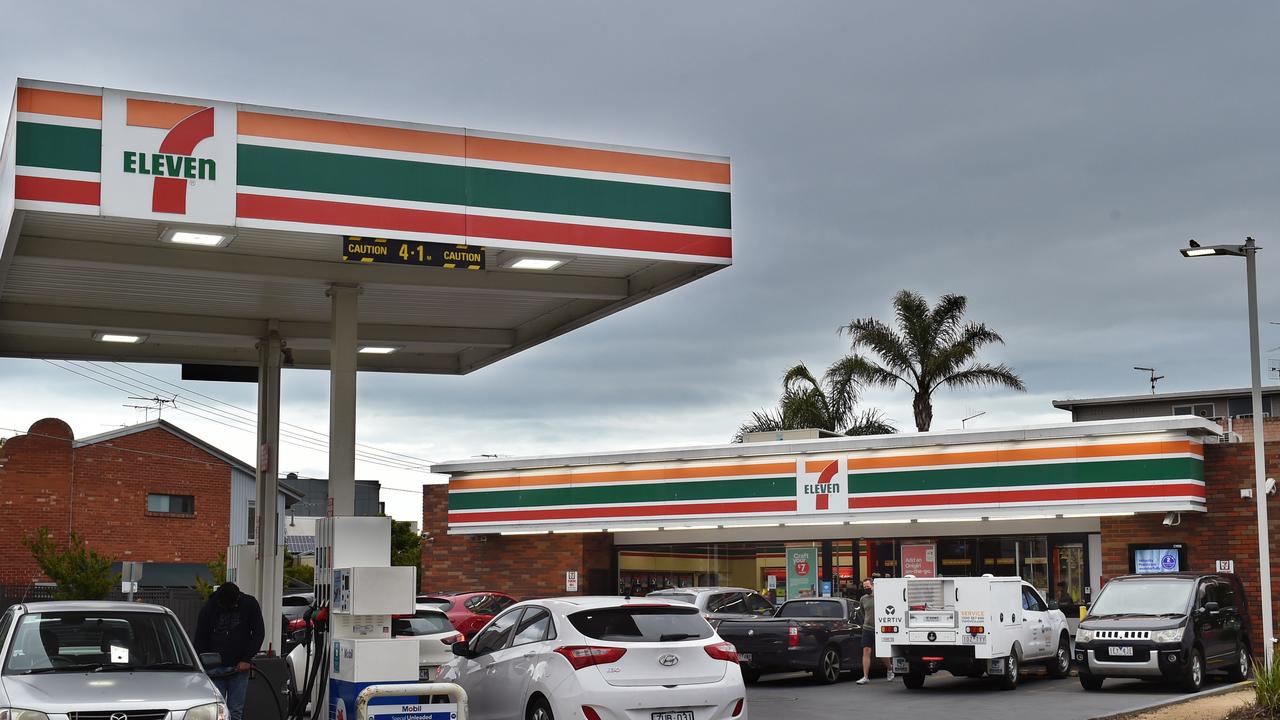 Pain is being felt at petrol pumps in Australia and overseas. Picture: NCA NewsWire / Nicki Connolly

When Morrison was speaking with reporters earlier this month, he made the case that Australia’s economic recovery has to been secured by a team with strong economic management credentials, referring to the Coalition.

Meanwhile Anthony Albanese has taken to social media to claim that “Scott Morrison doesn’t have a plan to lower the cost of living” and that “Everything’s getting more expensive, but wages are going backwards”.

Albanese went on to ask fellow Twitter users how much it was costing them to fill up their cars at the pump.

Stay updated with the latest in the world of entertainment. Sign up now

In the United States high petrol prices have become a political hand grenade of an issue, as even standard bearers of the progressive movement such as Senator Elizabeth Warren call for more action on this key item in the cost of living.

High petrol prices have been a contributing factor in President Joe Biden’s declining approval rating, which is the lowest for any post World War Two President at this point in their administration, with the notable exception of former President Trump.

An attempt at a global solution

With Democrats struggling badly in the polls and Biden’s administration viewed increasingly unfavourably, the White House hit upon an idea they hoped would improve their political fortunes, a release of strategic oil reserves in order to put downward pressure on oil prices.

Through a series of diplomatic efforts, the Biden administration managed to secure the co-operation of Britain, China, India, Japan and South Korea to take part in a co-ordinated release of strategic oil reserves.

Generally a nation’s strategic oil reserves are not intended to be touched outside an emergency such as a significant disruption in supply or a war.

So far the United States, China and India have confirmed a total release of 62.3 million barrels of oil from their reserves to be sold into the market. 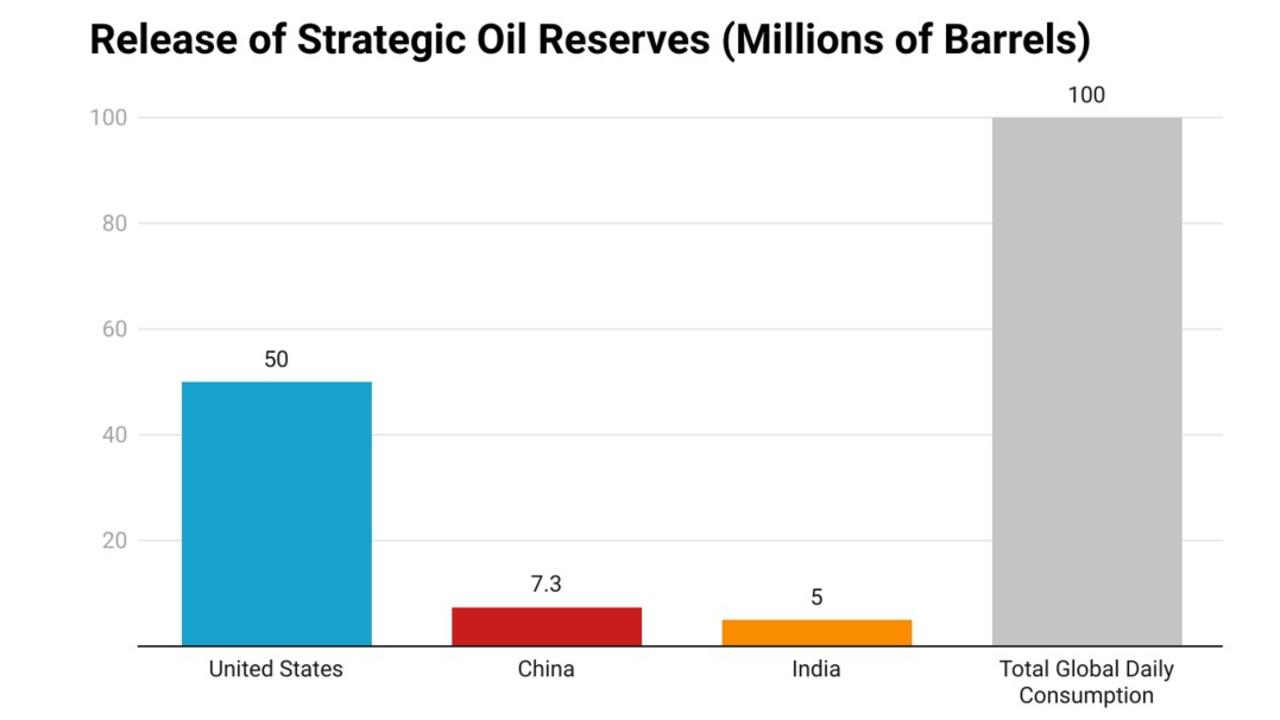 The 62.3 million barrels released isn’t even a day’s global consumption.

At first glance this appears to be a truly enormous amount of oil to be unleashed on the market. But when you put it into perspective, all of a sudden it goes from something seemingly enormous to at best a “drop in the ocean” to quote US investment bank Goldman Sachs’ view on the release of reserves.

While Japan, Britain and South Korea are yet to confirm exactly how many barrels of oil they will release onto the market, the cumulative releases by the three superpowers comes to just 15 hours of global oil consumption.

In the days since the relatively synchronised announcements that the reserves would be released, the oil price hasn’t done what the Biden administration would have liked. So far oil prices are actually higher now than before it was confirmed that the US would be releasing 50 million barrels of oil into the market. 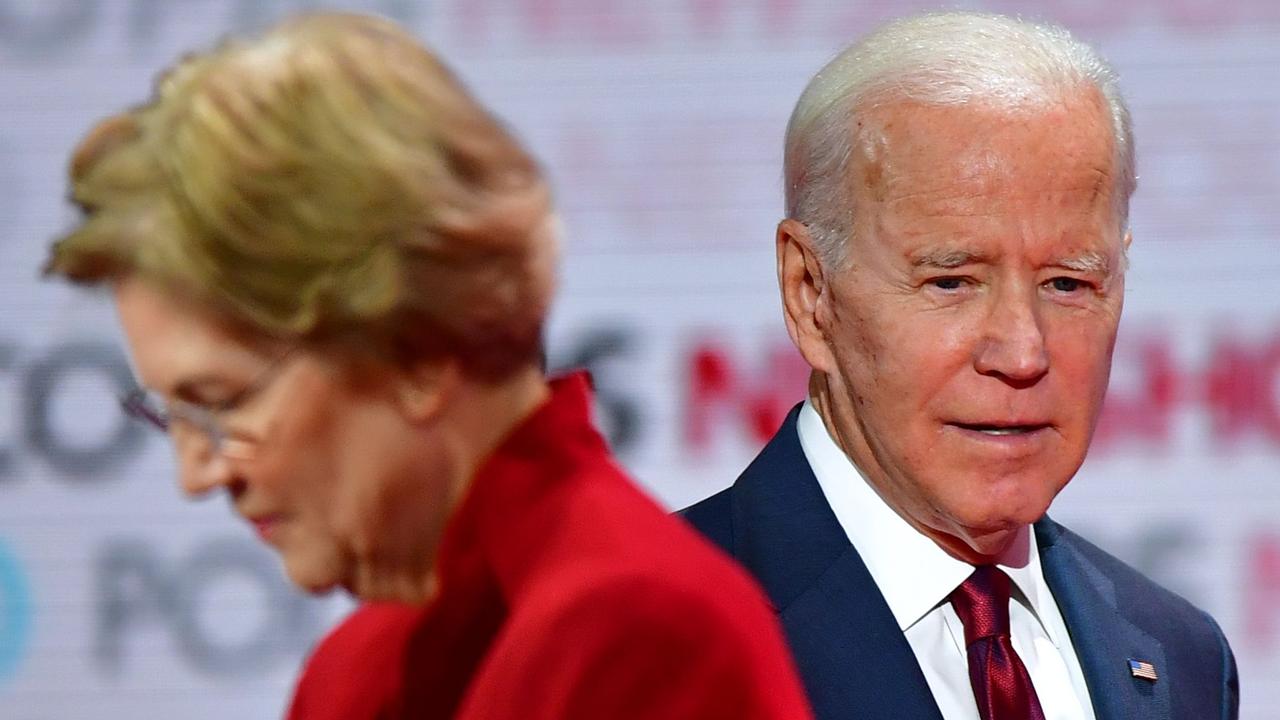 The unfortunate reality for pretty much anyone who owns a car with an internal combustion engine is that the plan was likely doomed to failure from the beginning.

Even if it had of been successful and it is a huge if, there was little to stop OPEC+ from turning around and cutting oil production by just as much.

Prior to the reveal of the details regarding the release of reserves, there was speculation from oil and commodities analysts that OPEC could do just that.

More pain at the pump to come?

Prior to the release of reserves news regarding lockdowns in Europe and concerns that movement restrictions could return to the United States did arguably see lower oil prices as a result.

If we see a repeat of the 2020 holiday season in terms of movement restrictions in the Northern hemisphere, there may be some relief from high oil prices, but it may not last.

With some analysts expecting oil prices to top US$100 a barrel from its current price of around US$79 in the New Year, the pain at the petrol pump may be just beginning for Australians and people around the world.

With the pandemic still very much a factor in potential global oil demand, it’s challenging to know exactly where oil prices will go in the short term. But in the long term one thing is far more certain, petrol prices are likely to be a key battleground on which the next election will be fought.