Competition watchdog chairman Rod Sims has warned retailers selling rapid antigen tests for more than $20 that they must “urgently explain” the inflated price tag as part of the consumer watchdog’s crackdown on pharmacies and small business operators seeking to take advantage of the shortage of tests.

The Australian Competition and Consumer Commission (ACCC) revealed it had received nearly 2000 reports of rapid tests being sold for as much as $100 per test. This is despite the tests costing between $3.95 and $11.45 at a wholesale level.

“At the extreme end, we have received reports or seen media coverage of tests costing up to $500 for two tests through online marketplaces, and over $70 per test through convenience stores, service stations and independent supermarkets, which is clearly outrageous,” Mr Sims said. The ACCC said the highest price it had seen advertised was $1000 for a single test.

The inflated pricing on RATs has continued despite the ACCC’s announcement on January 4 that it was launching an investigation into potential price gouging.

The federal government has included RATs in the group of healthcare products during the pandemic that are subject to strict anti-price gouging rules. Under those rules, selling a RAT for more than 120 per cent of its wholesale price could incur a penalty of five years’ jail time, $66,600, or both. 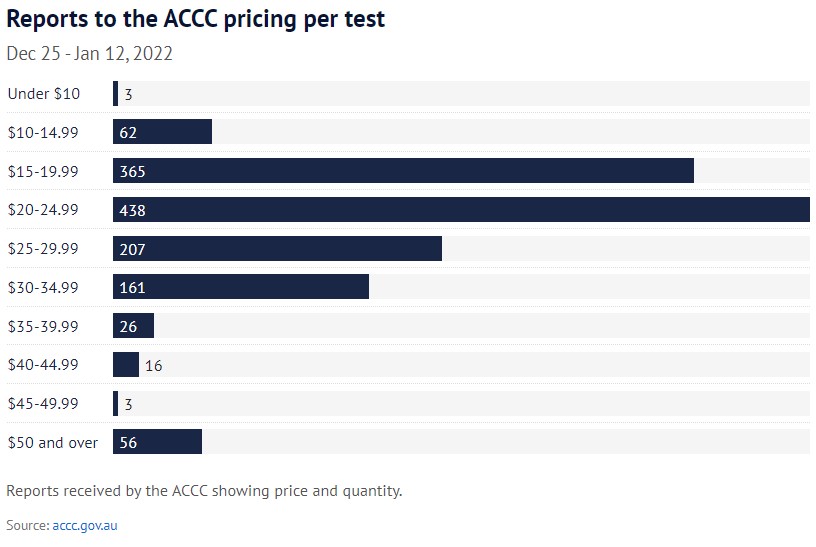 The watchdog said it was already eyeing tobacco and petrol station chains, including King of the Pack and Metro Petroleum, after receiving multiple reports of price gouging practices from these businesses.

“There are several businesses that have repeatedly come to our notice thanks to the information provided by the public. We are asking those businesses to urgently explain the prices they are charging.”

Australia has been grappling with a nationwide shortage of rapid tests for weeks now, an issue that is being exacerbated by the federal government’s shift away from PCR testing to rapid testing that caught pharmacies off guard.

Gumtree, eBay and Facebook have banned the sale of RATs on their platforms, which then saw Airtasker become a popular marketplace for selling and purchasing tests.

Pharmacies are the worst offenders when it comes to hiking the prices of rapid tests, making up 47 per cent of reports to the ACCC. This is followed by convenience stores, tobacconists and supermarkets (15 per cent) and petrol stations (15 per cent).

Between the end of December to January 12, the maximum mark-up on RATs has steadily increased from around $40 per test to as much as $100.

The ACCC will ask any business charging more than $20 per test to explain the reasoning behind the cost, Mr Sims said.

“Our initial research suggests that a price of around $20 per test or more, however packaged, may be hard to justify based on the average wholesale costs and such retailers should explain why the price is so high,” he said. 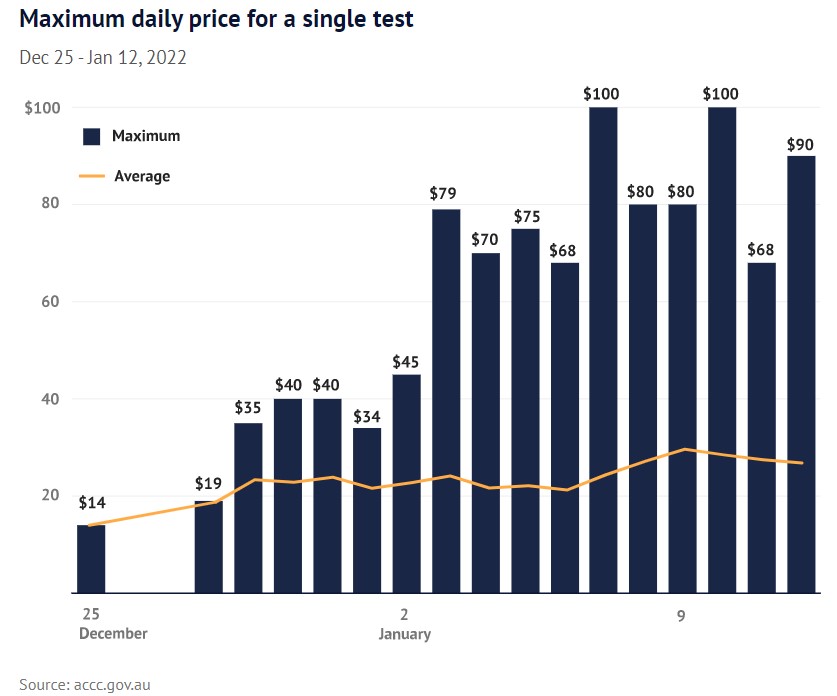 “Any test costing more than $30, even with supply constraints, is almost certainly too expensive and would seem to be taking advantage of the current circumstances.”

The ACCC has also received reports about some retailers refusing to provide receipts or providing incorrect receipts to customers buying rapid tests.

In one instance, a receipt issued by one convenience store stated the sale of a test as a “sandwich”, while other businesses demanded customers pay in cash or refused to issue receipts.

Mr Sims said the watchdog was “closely examining” these reports. “Refusal to provide receipts when requested or for total purchases of $75 or more (excluding GST) is a breach of the Australian Consumer Law,” he said. “Businesses could face penalties for this conduct.”

Splitting up packs of tests and reselling them individually is a “significant issue” that the Therapeutic Goods Administration (TGA) is dealing with.

Woolworths and Coles are selling packs of RATs for no more than $15 per test. Priceline and Chemist Warehouse have been contacted for comment but did not respond before publishing.