Retailer 7-Eleven has been dragged into an expensive plan to sell packs of rapid antigen tests for $300 – but the store says it knows nothing about it.

Convenience store chain 7-Eleven has been dragged into a bizarre RAT scheme where desperate consumers are being charged $300 a packet for the hard to find tests.

7-Eleven staff told news.com.au they were “not aware of why” there were signs in the neighbourhood directing people to pick up the pricey tests from their store.

It comes hot on the heels of a Melbourne cafe which was criticised for offering a two-pack of tests for orders over $159.

The consumer watchdog has said it has “significant concerns” over the retail price of rapid antigen tests (RATs) which in some instances has seen a single test, which wholesales for between $3.95 and $11.45, marked up to as much as $70 a pop.

There remains a huge shortage of the tests around Australia.

The QR code directs to a page where a box of 20 Panbio branded Covid-19 rapid tests, made by US firm Abbott Laboratories, is for sale for $300.

Several pharmacy websites have the identical product on sale for $250 or cheaper, although they are all sold out.

The text on the page says the kit “was purchased while oversease (sic) to comply with daily testing requirements as a tourist.

“The kit is no longer needed. I can provide free delivery to CBD and surrounding areas at a date or time of your choice”. 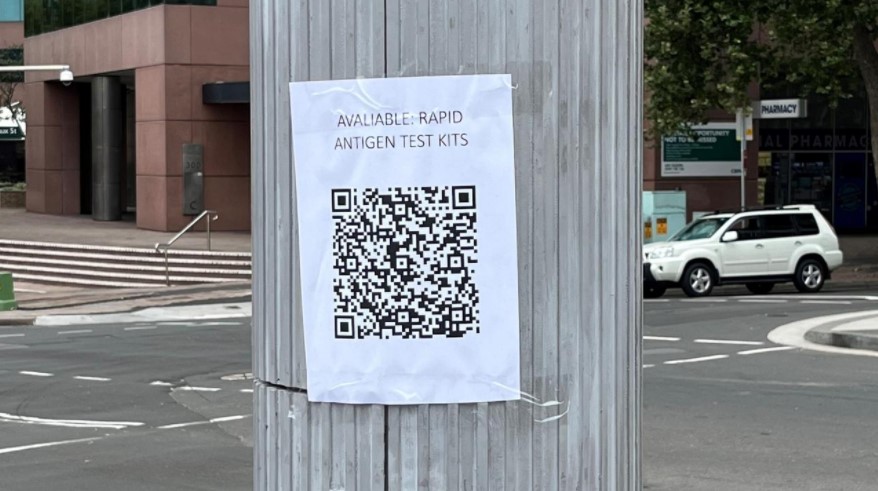 RAT tests were advertised for sale for $300 via QR codes on signposts near a Sydney station. Picture: News.com.au.

When you click on the option to pick up, it directs you to a 7-Eleven store in the city.

It is unclear from the ad whether the ad is directing people to stock available in 7-Eleven, whether a staff member is selling a pack or indeed if the seller is completely unrelated to the store.

If the latter is the case, the store might be a pick up point where the test is passed from seller to buyer.

Staff at the store told news.com.au they were flummoxed by the advert. They did have some RATs on order but like most other retailers they had yet to come through.

“Our marketing team would never put a random A4 piece of paper up on a wall,” news.com.au was told.

7-Eleven’s Australian head office has been contacted for comment to confirm if the ads have any connection to the company, its franchisees or staff. The seller of the test or tests has also been contacted.

The desperate search for RATs has led some businesses to offer them as an incentive to customers – which has not gone down well.

Melbourne coffee roasters, St. Ali were lashed on social media after the company ran an offer to include a free two-pack of Rapid Antigen Tests on orders over $159.

However, the move drew immense criticism on social media, with people labelling the promotion as “tacky” and “unethical,” and others swearing off the brand. 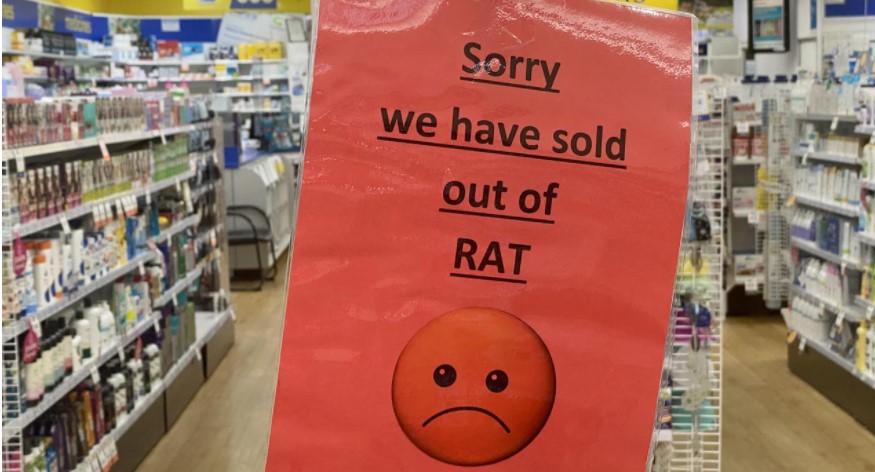 Rapid tests can now be used as conformation of a Covid-19 infection, alongside traditional PCR tests.

But a severe lack of availability has seen some sellers hike prices to what the Australian Consumer and Competition Commission (ACCC) has said is “outrageous” levels.

Despite the wholesale cost of a test ranging from $3.95 to $11.45 a test, the ACCC has found that some retailers are charging more than ten times the cost of the tests as demand skyrockets.

Pharmacists and service stations were the most complained about RAT sellers.

“At the extreme end, we have received reports or seen media coverage of tests costing up to $500 for two tests through online marketplaces, and over $70 per test through convenience stores, service stations and independent supermarkets, which is clearly outrageous,” ACCC Chair Rod Sims said on Monday.

“There are several businesses that have repeatedly come to our notice thanks to the information provided by the public. We are asking those businesses to urgently explain the prices they are charging.”

The consumer watchdog has contacted more than 40 test suppliers, major retailers and pharmacy chains seeking information about their costs, current pricing, and stock availability, and reminding them they need to be able to substantiate any claims they make to consumers about the reasons for higher prices.

The ACCC added that “complex supply chains” can mean prices will vary. But they shouldn’t vary to the amount some sellers are trying to flog them off for.

The ACCC has received over 1800 reports from consumers about rapid antigen tests since Christmas and said it was now averaging close to 150 reports a day.

A survey by think tank the Australia Institute found 72 per cent of Australians believe the government should provide RATs to everyone free of charge.

Even Coalition voters backed the call for free RAT tests with 66 per cent of voters who voted for Scott Morrison urging the Prime Minister to act.