Strata committees of many apartment buildings across Australia are racing to install electric vehicle-charging systems in their garages even though many still have no electric car-owners – or, at most, just one.

“We know electric vehicles are coming and we can’t ignore that,” said Brian Jackson, the treasurer of the strata committee running the 175-apartment Waratah complex in Sydney’s Potts Point.

“It’s about future-proofing the building. If we want to stay a site where people want to live and also to enjoy savings and capital appreciation, we need to be ready. We only have one person with an electric car at the moment, but we’ve decided to put in the infrastructure now while we have the budget and the technology.”

It’s a similar story across the country as strata buildings rev up to retrofit elective vehicle (EV) chargers into their common property for residents, with predictions their availability could soon be as desirable as high-speed internet. Most new buildings are already being constructed with EV chargers as part of their fabric.

At the Neue Grand in Melbourne’s St Kilda, for instance, they’ll be ready to be used when the building is finished in 2023, complete with lifts that move cars from the basement to the actual apartments up to 19-storeys-high, where they – and their chargers – will be displayed in glass-walled garages. 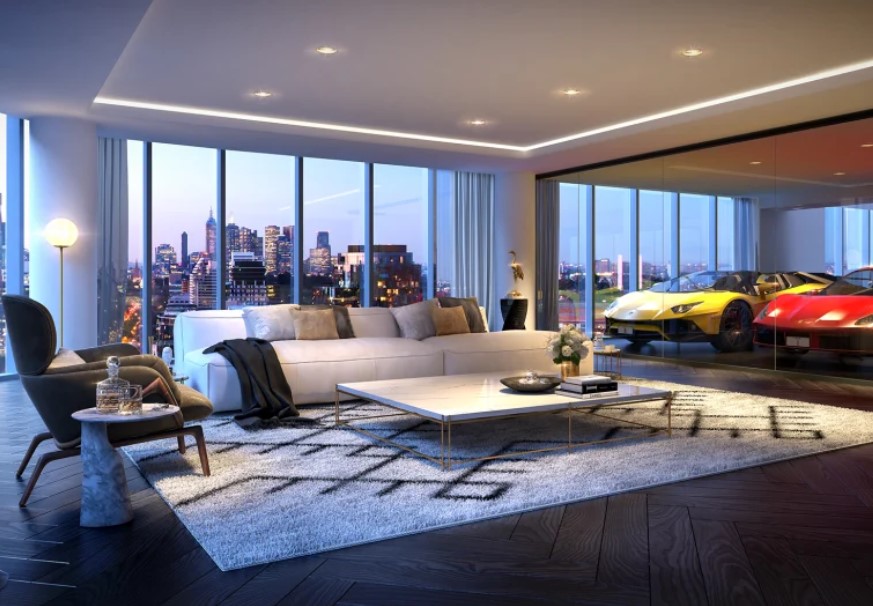 Apartments in New Grand will have glass-walled garages where cars, and chargers for any electric vehicles, will be displayed.

“Most developers are trying to get the highest green star rating as they can for their projects, and they’re bulk-billing for electricity and buying it as a group to keep costs lower for residents. These days, people are looking for energy-efficiencies throughout their buildings and they know such things will add value for the future.”

The pluses of EVs are many – they’re low emitters of greenhouse gases, so are climate-friendly and improve air quality with carbon emissions potentially cut by up to 90 per cent, while they can also be powered from green energy like solar and wind.

As a result, the operating costs are three to four times less than cars powered by petrol and, with overseas carmakers shifting rapidly to EVs and cars no longer produced domestically, Australia has to keep up.

The problems for established apartment buildings, however, are where to put communal chargers for electric cars, whether there’s enough spare electrical capacity to accommodate them and how to introduce user-pays systems for the energy.

At the 270-apartment Horizon building in Darlinghurst, two of the visitor car spaces have now become EV-charging spots, while a feasibility study is undertaken to work out the next phase of the rollout.

We looked at our power supply and we only had enough for 12-15 private places,” said strata committee member Deborah Aitken.

“We debated the inequity of a first-served system, as well as making sure tenants were included, so decided to put in a three-phase common property charger. Retrofitting is always difficult, unfortunately, and you never know what’s coming next with technology.”

In Alexandria, Nathan Hague of the Zinc building has installed a $30,000 infrastructure system to service the 45 apartments, even though there’s also currently only one EV there.

“You make the investment to give people the opportunity to charge for future planning,” he said. “Some people have been asking about it when they’re considering buying into the building. It will come.”

Users will pay via an Uber-style billing app, while in Waratah they pay for power on three-monthly meter readings, and also a quarterly fee to contribute to the $5000 to $6000 cost of the infrastructure. Others pay via their credit card, adds Strata Choice executive director Daniel Linders.

“It’s really ramping up now,” he said. “At the new Opera Residences at Bennelong Point, they gave people an option to upgrade and have an EV charger and a lot of people took that up.” 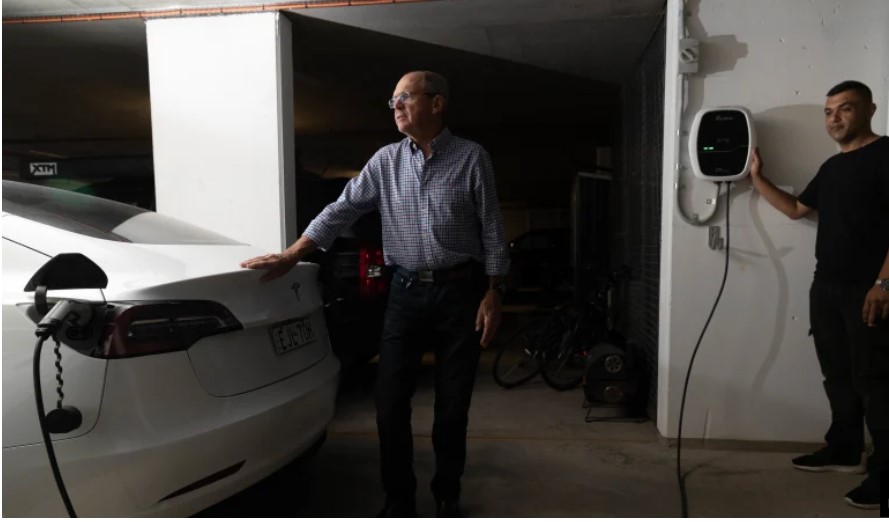 At the peak body of strata managers, Strata Community Association Australasia, president Chris Duggan said “EV charging is likely to see a shift in momentum next year as more focus is placed on strata as a key solution to unlocking the scalability of domestic EV charging”.

“One of our focuses will be on campaigning for strata-specific federal support to kick-start the EV retrofit revolution that needs to occur to support the Government’s net zero ambitions,” he said.

“Strata infrastructure can act as an impact multiplier and we believe is a key strategic lever for achieving more cost-effective EV take-up. It could well be the case soon that EV charging availability is as much a driver of consumer behaviour – and apartment values – as the availability of high-speed internet.”

A study of the future of EV charging in apartments in Sydney found that 48 per cent of respondents plan to have an electric vehicle within the next five years, 78 per cent were in favour of installing charging and 79 per cent would like a user-pays arrangement for individual car spaces.

Most buildings, however, would require integration with the common area power supply – like lifts, carpark, foyers and facilities – and 30 per cent of strata schemes surveyed were at risk of overloading within the next three years.

Brent Clark of Wattblock, which provdes advice to strata committees and councils, says that while there are 31 EV models available today, there’ll be 58 by the end of 2022. Most buildings will start with charging in communal car parks, via booking or remote bollard-lowering systems, and then may convert to individual spaces as more money is invested.

“It is a real rush now to bring EV charging into apartment buildings, most probably because of the attention on the COP26 UN Climate Change Conference in Glasgow and the publicity over the Rivian release of an electric ute and its value now of US$100 billion,” Mr Clark said.

“As well, we’ve had Scott Morrison’s repositioning on EVs and the NSW government is providing incentives on EVs, which are also becoming cheaper.

“Strata has been at the rear end of getting prepared but now we’re seeing buildings everywhere racing to catch up. In Pyrmont, a potential tenant refused to rent in a building when they found they couldn’t charge their Tesla, and in Redfern an owner booked a spot on the electricity infrastructure, even though their tenant didn’t have an EV. There’s more interest in this now than in solar power.”

Extracted in full from: Strata committees in apartment buildings are racing to retrofit electric vehicle chargers, even with only one user (smh.com.au)