Electric vehicle affordability is poised to hit a speed hump on its journey down the cost curve, as global demand for battery-grade lithium starts to outstrip supply, driving up prices of the key ingredient in both the clean transport and clean energy transitions.

After a decade of price declines, costs of battery-grade lithium are “poised to skyrocket,” according to research from Rystad Energy, posing the threat of a “major cost headache” for electric vehicle makers, just as the market really starts to hit its straps.

According to Rystad Energy’s analysis from late last week, prices for lithium are currently trading at a record high of $US35 per kilogram in Asia, and are likely to keep climbing to $US50 per kilogram in the second half of 2022 on the way to around $US52.5 per kg, this time next year. 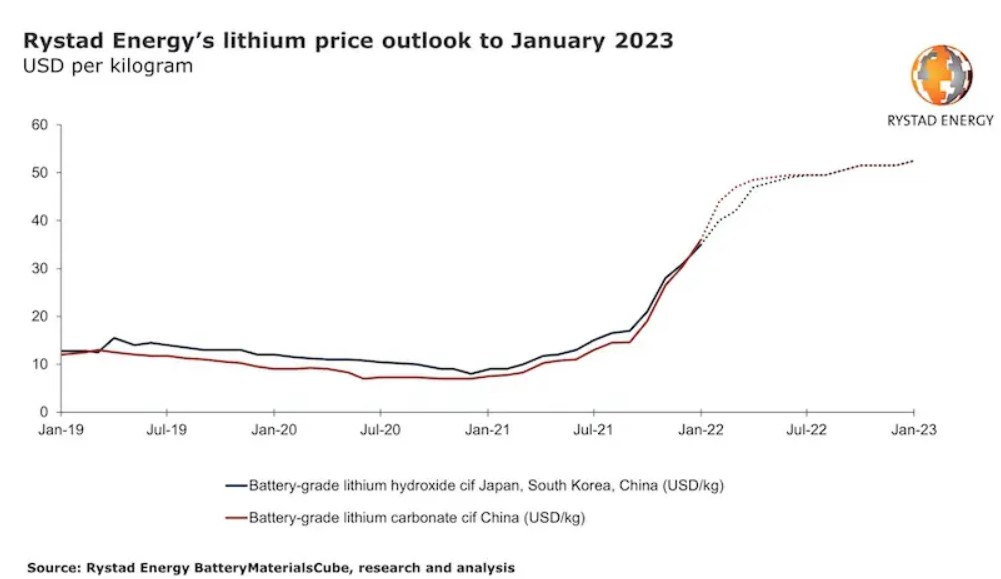 Signs of trouble were hitting the market towards the end of 2021, with a December report from S&P Global forecasting that booming EV demand growth in 2022 would result in a lithium deficit, as use of the material outstripped production and depleted stockpiles.

According to Rystad Energy, the supply of lithium salts is expected to remain tight through the first half of 2022, at least, due to lagging production in China and South America.

Rystad says producers in these regions are hesitant to ramp up operations, taking a cautious stance because of the ongoing logistical challenges wrought by the global Covid-19 pandemic.

“Producers appear reluctant to sell significant volumes on the spot market, as supply constraints and the ongoing logistical issues caused by the pandemic create bottlenecks in the trading market for lithium salts,” the report says.

According to Rystad, the supply tightness for lithium salts, combined with the demand outlook for LFP batteries that typically feed on lithium carbonate, is expected to keep lithium carbonate prices high and support a notable premium over the price for lithium hydroxide in early 2022.

Of course, this dynamic won’t last forever. Rystad Energy estimates the price premium will gradually narrow after seasonal supply bottlenecks ease in China and a ramp-up plan in South America materialises. Australian lithium resources could play a part in meeting demand, too.

But don’t expect lithium prices to crash back down, either. According to Wood Mackenzie’s research director for battery raw materials, Gavin Montgomery, cited in FT.com last week, this outcome is unlikely.

“We’re entering a sort of new era in terms of lithium pricing over the next few years because the growth will be so strong,” he said.