CNN)Unrest broke out in cities across Kazakhstan on Wednesday, as thousands angrily protested a sharp fuel price hike that sparked the resignation of the Central Asian country’s government.

Local media reported the airport in the country’s biggest city, Almaty, was breached by protesters, while a state of emergency has been introduced throughout the country, state-run Khabar 24 reports. It will be implemented until January 19, with the news agency saying restrictions on movement, including transport, were introduced in all three major cities and 14 regions.
In the three cities, local administration officials came under attack, buildings were damaged and “stones, sticks, gas, pepper, and Molotov cocktails were used,” according to a statement by the Interior Ministry. A journalist in Almaty told CNN they were experiencing internet outage and lights appeared to be off in buildings near the President’s residence and mayor’s office.
The press service of the Almaty airport told local outlet Orda.kz there were “about 45 invaders at the airport” on Wednesday evening. “The airport employees evacuated passengers on their own,” they added.
The protests were ignited when the government lifted price controls on liquefied petroleum gas (LPG) at the start of the year, Reuters reported. Many Kazakhs have converted their cars to run on the fuel because of its low cost.
Prime Minister Askar Mamin resigned amid the protests, and President Kassym-Jomart Tokayev held a meeting on “the evolving difficult socio-political and socio-economic situation in the country,” according to a statement published on the presidential website Wednesday. 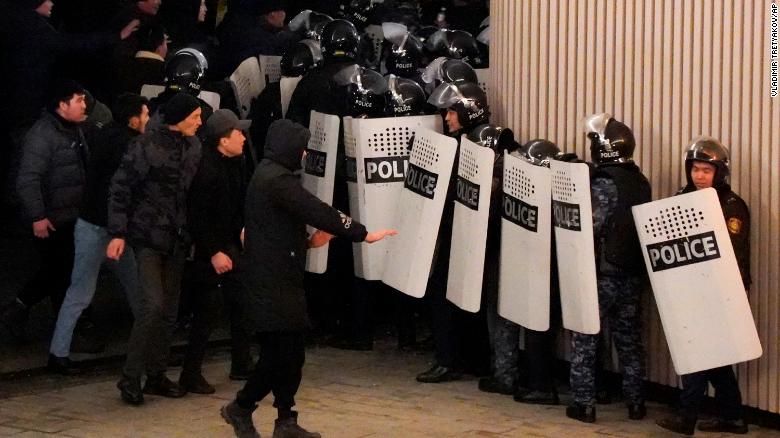 Protesters and riot police in Almaty on Wednesday.

Tokayev said in a national television address on Wednesday that he will take control of the country’s Security Council — a move that seemingly sidelines his predecessor, the country’s longtime President Nursultan Nazarbayev, who led the country since it was a Soviet Republic until his departure in 2019, and has remained an influential but controversial figure behind the scenes and on the council since.
In a second televised address, the Kazakh President appealed for help from a military alliance comprised of post-Soviet states after “terrorists” captured Almaty airport, including five aircraft and are battling with the military outside the city.
According to state news agency Kazinform, Tokayev called on the heads of the Collective Security Treaty Organization (CSTO) — which includes Russia, Belarus and Kyrgyzstan — to help put down the unrest. Tokayev said a number of infrastructure facilities in the city have also been damaged. He accused the protesters of undermining the “state system” and claimed “many of them have received military training abroad.”
Eight police officers and national guard personnel were killed in riots in different regions of the country, according to Kazakhstan’s local outlet Tengrinews.kz. It also said 317 officers and personnel were injured, citing the press service of the Ministry of Internal Affairs. 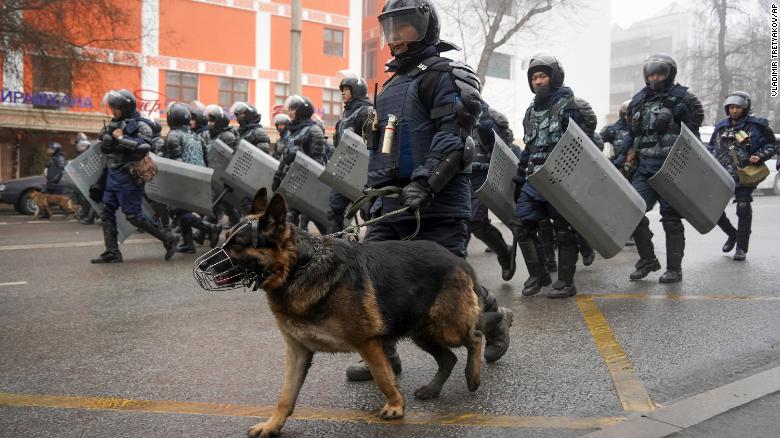 Oil-rich Kazakhstan, the world’s ninth-largest nation by landmass, has attracted foreign investment and maintained a strong economy since its independence, but its autocratic method of governance has at times prompted international concern and has seen authorities harshly crack down on protests, according to global rights groups.
The State Department’s 2018 human rights report noted Kazakhstan’s 2015 presidential election, in which Nazarbayev received 98% of votes cast, “was marked by irregularities and lacked genuine political competition.”
Alikhan Smailov has been appointed acting prime minister, and members of the government will continue to serve until the formation of the new cabinet, the statement added.
A local journalist told CNN that thousands of people were protesting outside the mayor’s office in Almaty on Wednesday.
More than 10,000 people at the city administration building, we call it the Akimat. They have encircled it,” Serikzhan Mauletbay, deputy editor in chief of Orda.kz, said. Mauletbay said stun grenades were used and there is “some kind of fire,” according to an Instagram live video he watched from the scene.
Another journalist described the scene as chaotic and said they could hear and see what they believed were stun grenades going off and shots being fired, but it is unclear what the firing sounds were.
Russia maintains close relations with Kazakhstan and Russia depends on the Baikonur Cosmodrome as the launch base for all Russian manned space missions. The Central Asian nation also has a significant ethnic Russian minority; the CIA World Factbook says around 20% of Kazakhstan’s population is ethnically Russian.
The Kazakh president said a number of measures aimed “to stabilize the socio-economic situation” had been put into place, including government regulation of fuel prices for a period of 180 days, a moratorium on increasing utility tariffs for the population for the same period, and the consideration of rent subsidies for “vulnerable segments of the population.”
On Tuesday evening, Tokayev said on his official Twitter feed the government has decided to reduce the price for LPG in the Mangistau region to 50 tenge ($0.11) per liter “in order to ensure stability in the country.”

Extracted in full from: Emergency declared in Kazakhstan as fuel protests rage and government resigns – CNN