EV boom: ‘Australia should be an electric vehicle leader’

Sales of new electric cars in Australia have more than tripled in the past 12 months, growing to more than 24,000 off the back of state government rebates, discounts and a more competitive domestic market driving down prices.

Growth in electric vehicles topped that of the global car market in 2021, up 26 per cent over the previous year despite COVID-19 restrictions and component shortages. Global sales hit a record 6.4 million for the year, with China accounting for 12 per cent of all new electric vehicle sales.

Sales in NSW eclipsed the 6900 electric cars sold nationwide in 2020, with 7430 new registrations. There were 6396 sales in Victoria despite fierce criticism of the state government’s proposed road-user charging system. Almost 1000 sales in the ACT increased the market share in the capital to 5.87 per cent.

While making up 6.3 per cent of global vehicle sales in 2021 – tripling their market share from 2019, before the pandemic – market penetration was mostly confined to the Chinese, North American and European markets. The rest of the world, including Japan and Australia, lagged.

The Electric Vehicle Council data, released on Monday, shows five of the top 10 highest-selling models in Australia last year retail under $50,000 drive-away. Chinese-owned MG ZS SUV was the second highest with 1388 cars sold. The MG HS model, which retails for about $46,990 was fourth while the electric Mitsubishi Outlander, Hyundai Ioniq and Nissan Leaf also made the top 10.

Chris Ross, who lives in Concord in Sydney’s inner-west, said the NSW government policy of a $3000 rebate and removal of stamp duty enabled him to purchase a Tesla 3 model.

“Lowering our carbon footprint is something we are conscious of, but the strong second-hand car market and the rebates made it an economically viable decision,” he said.

He said range anxiety — a driver’s fear that an electric vehicle has insufficient energy storage to cover the road distance needed — was a “beat-up”. He had driven his car from Sydney to Wollongong, Canberra and the South Coast without problems.

Astrid Herber had not owned a car for several years before buying a MINI Cooper Electric hatch last year. Based in the inner-Melbourne suburb of Richmond, she said the range was “a bit crappy” but met her needs. She has driven to Adelaide but admitted it had its challenges.

“You do need to plan ahead with the smaller cars, but the bigger ones have a much better range,” she said. “But I love my MINI. It suits my needs and I can charge it at home and at work.” 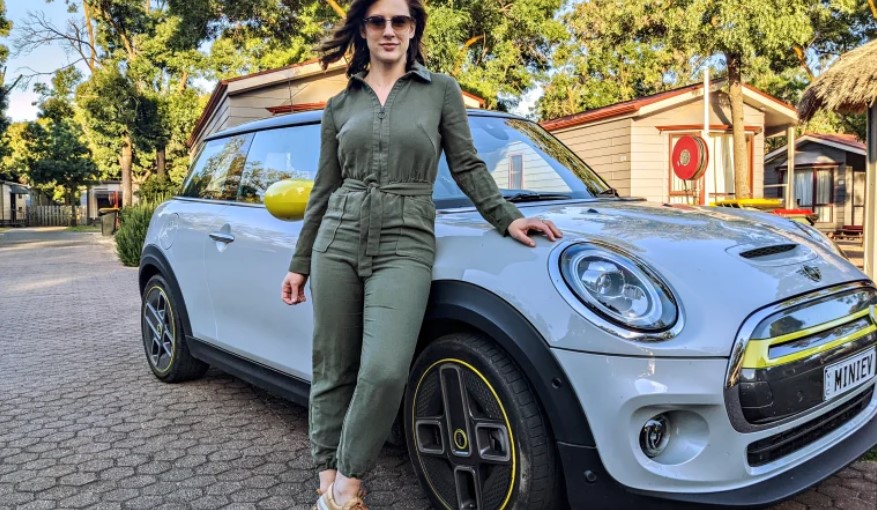 Electric Vehicle Council chief executive Behyad Jafari said the boost in sales was being driven by positive policy change at a state level.

“The penny has now well and truly dropped on how good electric vehicles are. Most people in the car market will now be considering an electric option. The role of government is to help them make the jump,” he said.

But he said the federal government “desperately” needed to introduce rebates alongside fuel-efficiency standards, like other developed nations.

“Australia should be an electric vehicle leader,” Mr Jafari said.

The Morrison government has been heavily criticised by carmakers and advocacy groups for its refusal to set targets in the sector and previous public ridicule of the technology. It has ruled out subsidising new cars to encourage widespread uptake.

Government modelling found subsidies for battery electric vehicles was not value-for-money for taxpayers and was an expensive form of abatement. The Coalition is optimistic that the total cost of ownership gap between electric and internal-combustion engine vehicles will close in the coming years.

“Australians are making the choice to switch to hybrids and electric vehicles,” said the Minister for Industry, Energy and Emissions Reduction, Angus Taylor.

He said the government would support more Australians to make the switch by investing in the charging infrastructure needed across both regional and urban Australia.

He said because the Coalition’s successful free trade agreements, four of these five top-selling EVs and hybrids were already free from import tariffs, reducing the costs of new cars for families.

Extracted in full from: Electric car boom: Australia should be an EV leader, says industry (smh.com.au)