Australian motorists are facing the threat of record high petrol prices persisting for weeks as a global oil supply crunch and military tensions in Ukraine contribute to the alarming fuel costs being felt by households and businesses.

A day after Australia recorded its biggest jump in inflation since 2014, driven by an annual petrol price rise of 32.3 per cent, economists have warned the fuel price shock presents a risk to the national economy.

KPMG chief economist Brendan Rynne said Australia’s petrol prices were likely to remain high for some time as rises in international oil prices took at least a fortnight to flow through to Australian supply chains.

“We break our economy into 114 different sectors, and oil is across every single one of them,” Dr Rynne said.

“When you get an increase in the price of oil, it gets passed through to every business and every consumer – that’s why price increases in oil act like an increase in taxes.”

The longer the price spike is maintained, Dr Rynne said, the “more entrenched the feeling of inflation becomes at the consumer level and the business level”.

Nationwide, the average price of unleaded petrol has climbed 15 per cent in the past six months to $1.70 a litre, an unprecedented high in nominal terms. The increase has been particularly felt in Sydney where average prices have risen 11 per cent this month alone and were trading at $1.75 on Australia Day. 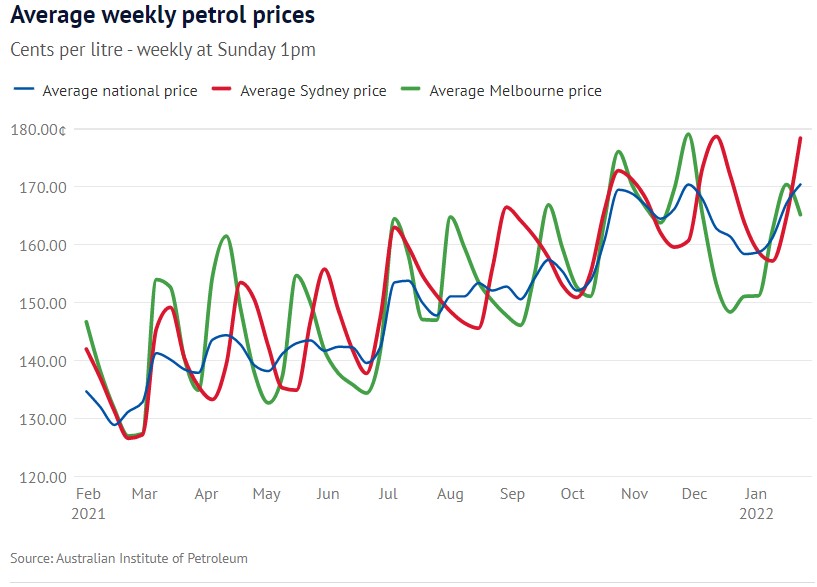 However, monitoring by the NSW-based National Roads and Motorists Association (NRMA) has revealed nearly 40 per cent of Sydney petrol stations had pump prices above a record $1.80 a litre.

However, monitoring by the NSW-based National Roads and Motorists Association (NRMA) has revealed nearly 40 per cent of Sydney petrol stations had pump prices above a record $1.80 a litre.

In Melbourne, the average unleaded price per litre has also edged 7 per cent higher this month, from $1.51 to $1.62.

Hobart’s average price has hit a record $1.81, while Brisbane rose 16 per cent to $1.76, according to data compiled by the Australian Institute of Petroleum (AIP) and price-tracking website FuelPrice Australia.

“We’ve been paying record prices across the country,” said NRMA spokesman Peter Khoury, who attributes the increase mostly to a series of international circumstances outside of Australia’s control.

“Basically, everything that could go wrong right now is going wrong,” he said.

Australia’s petrol prices are linked to international oil markets via the Singapore benchmark Mogas 95. Benchmark prices for crude oil – a natural resource which is processed and refined into transport fuels – are up more than 10 per cent since the start of the year, underpinned by robust demand despite surging Omicron COVID-19 infections worldwide.

Meanwhile, members of the Organisation of Petroleum Exporting Countries (OPEC) have continued to produce less oil than pledged under increased output target levels.

CommSec senior economist Ryan Felsman has also pointed to geopolitical tensions, including the threat of Russia invading Ukraine, that has “increased concerns about an already-tight supply outlook”.

Fuel price inflation was cited as a driving factor behind the nation’s biggest inflation rise since 2014, the Australian Bureau of Statistics reported earlier this week, along with the rising cost of building new homes.

A spokesperson for Federal Energy Minister Angus Taylor on Wednesday said the government recognised some Australian families and businesses were facing price pressure at the pump as a result of global supply and pricing factors.

“The government expects that motorists are getting a fair deal when buying fuel, however, the government does not regulate prices, he said.

“Whilst the world is experiencing high oil prices, data from the Australian Petroleum Statistics indicate Australia has among the lowest prices in 2021 of all OECD countries.”

The ACCC would continue to monitor the market to ensure consumers were not overpaying, the spokesperson said. 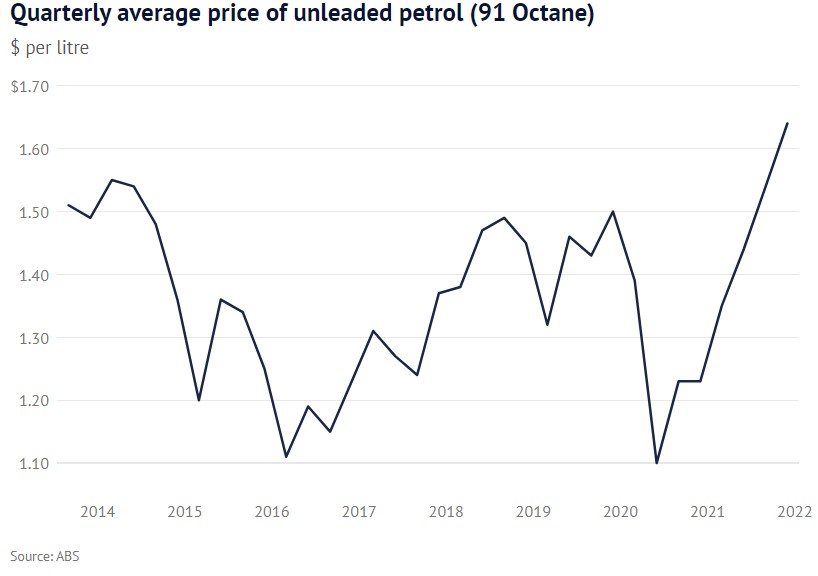 Petrol prices can vary across the country based on differing competition factors, such as the size of the market, their location, the degree of competition, business-specific pricing strategies and variations in major cities’ pricing cycles.

Australia’s average fuel price rises in the past 12 months follow a year of historically cheap petrol across the country’s five capital cities in the 2020-21 financial year, as the onset of COVID-19 lockdowns gutted fuel demand and unleashed a global oversupply of crude oil.

Statistics from the Australian Competition and Consumer Commission (ACCC) showed motorists paid an average $129.7 a litre for the 12-month period, the lowest inflation-adjusted monthly price since retail price-monitoring began in 1991.