A service station is coming under fire for selling rapid Covid tests at an “outrageous” price, but they’re not the only ones doing it.

The RAT race is on for rapid Covid tests in Australia, with retailers selling them at ridiculous prices — if they have any at all — amid skyrocketing demand.

On eBay, one of the nation’s biggest online retailers, there were only two listings for RATs, with both selling at eye-watering prices.

Another major online retailer, Kogan, didn’t have a single rapid test available — nor did Amazon or Harvey Norman – though screenshots show Kogan had at one point listed the tests for $44 each. 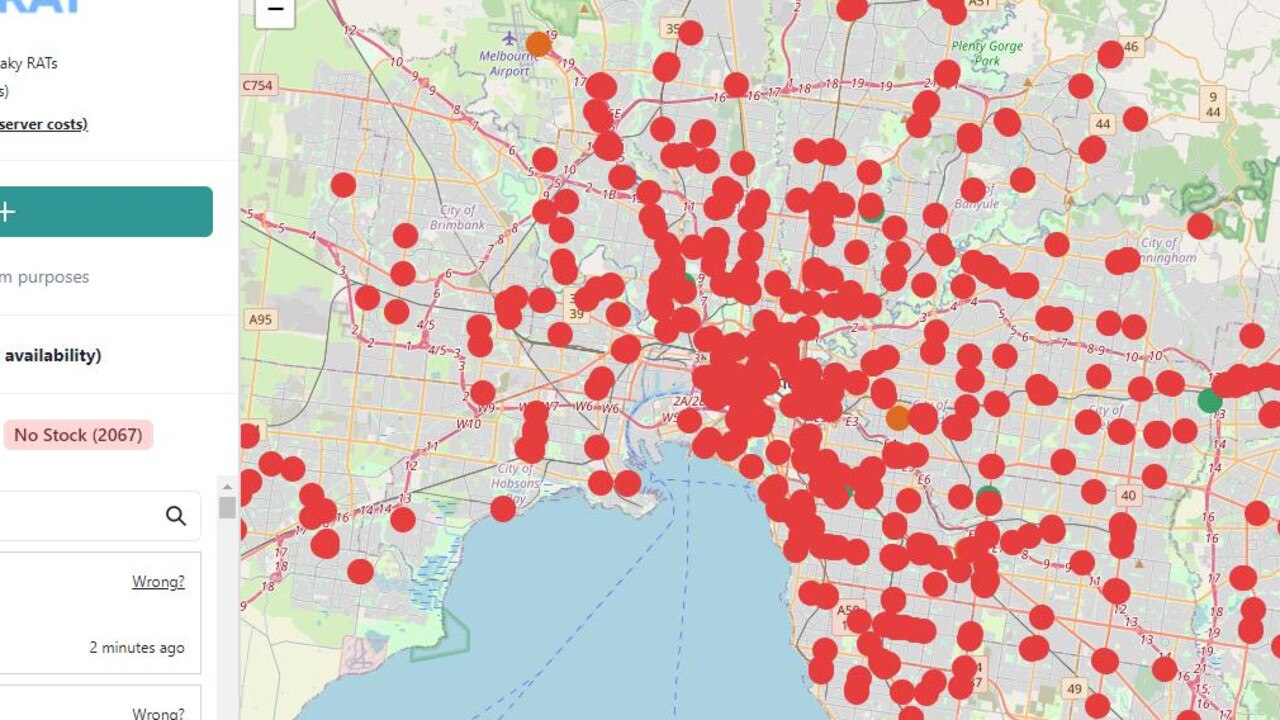 A map showing all the stores that have sold out of rapid tests in Melbourne. Picture: Find a RAT

Meanwhile, Australians are taking to social media to name and shame stores selling the highly-sought-after kits at high mark-ups — with some alleging they had seen prices as high as $44 a kit. 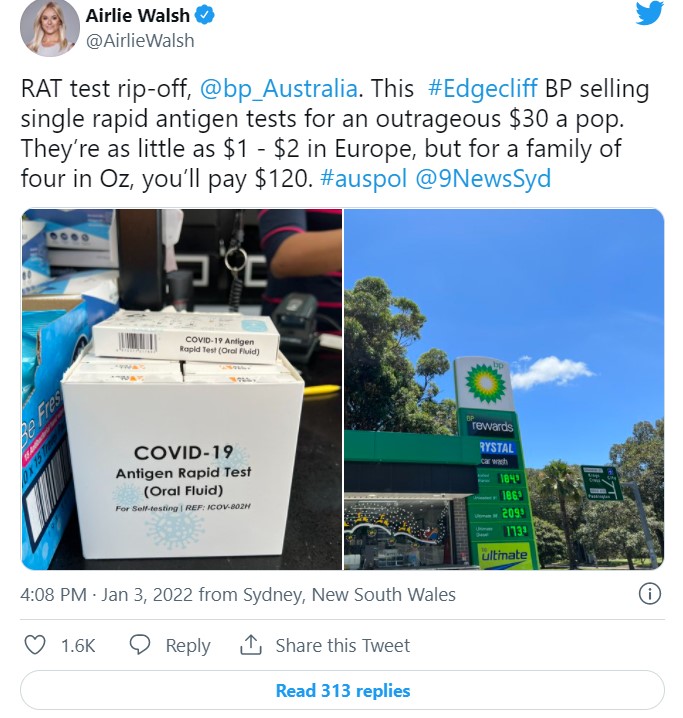 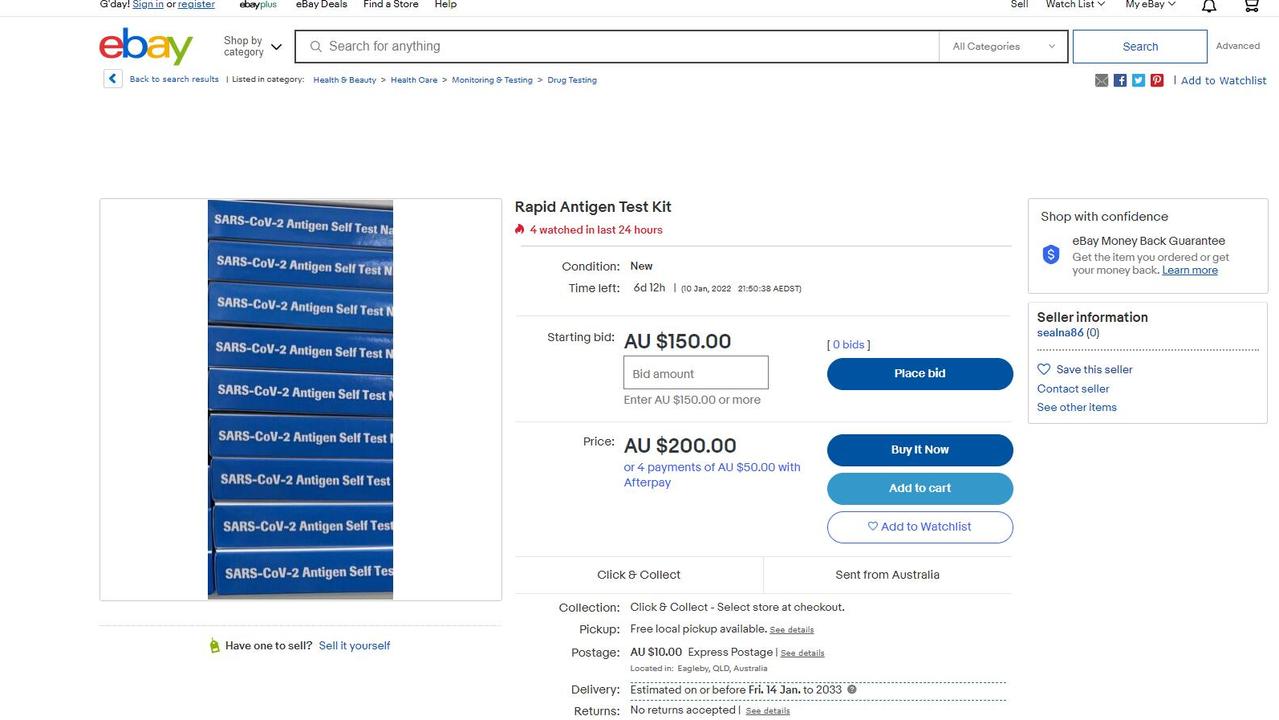 Rapid antigen testing kits were listed on eBay for up to $200 on Tuesday morning.

Frustrated Aussies who can’t afford or source one of the tests are voicing their anger online.

Eleanor Pendleton, a beauty and health journalist, said she bought more than 100 RATs for a production shoot in November — costing her $12 a test.

“What cost me $1200 two months ago would today cost $4000!” she wrote on Instagram. “With PCR tests only available to those with symptoms, the price gouging on RATs is disgusting.”

On Tuesday afternoon, Australia’s competition watchdog announced it would “name and shame” retailers which are selling rapid tests at exorbitant prices.

Australian Competition and Consumer Commission (ACCC) chair Rod Sims vowed a crackdown on rogue retailers, announcing the ACCC was “on the case” and was monitoring the situation “very closely”.

“If we get a number of reports about excessive pricing from particular outlets, that’s when we can get involved and take whatever we judge to be the appropriate action,” he said.

“We’re gathering information as fast as we can.”

Mr Sims said while suppliers were generally able to set their own prices, businesses “must not make” false or misleading statements about the reason for high prices.

“We won’t be shy to name and shame suppliers and retailers we consider to be doing the wrong thing,” he said.

The shortage of rapid tests comes amid a fierce political spat, with testing kits in short supply, and the federal government ruling out making them free.

On Monday, Mr Morrison said he would not undercut businesses by making RATs free, insisting Australians needed to pay for their own tests.

“We’re now at a stage of the pandemic where you can’t just make everything free, because when someone tells you they want to make something free, someone’s always going to pay for it and it will be you,” he said.

His comments sparked backlash as cases around the country continue to surge, with some state and commonwealth testing centres turning people away.

“We’re now at a stage of the pandemic where you can’t just make everything free, because when someone tells you they want to make something free, someone’s always going to pay for it and it will be you,” he said.

His comments sparked backlash as cases around the country continue to surge, with some state and commonwealth testing centres turning people away. 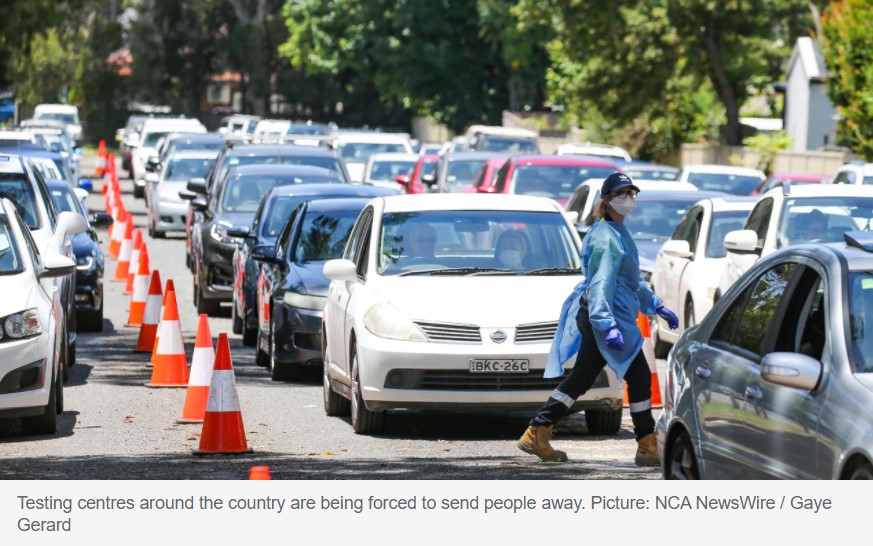 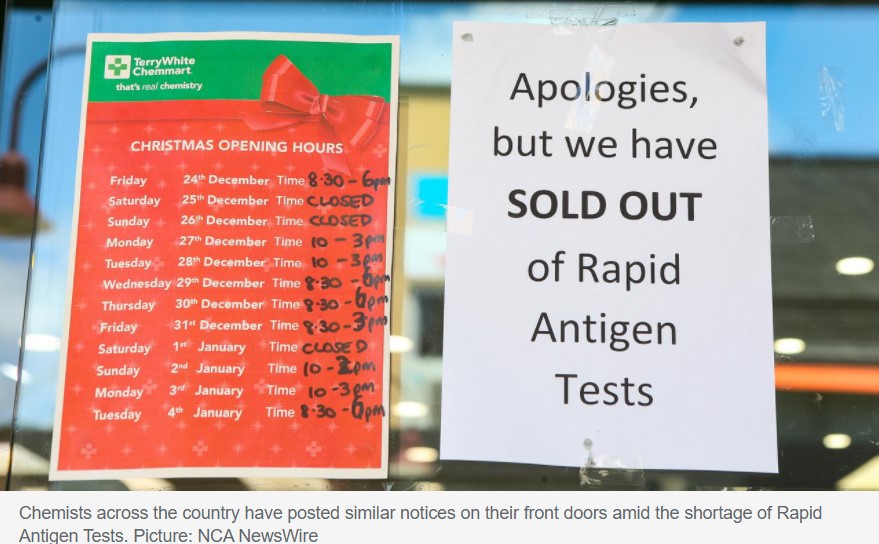 Shadow Treasurer Jim Chalmers ramped up his attack on the Prime Minister on Tuesday, saying Mr Morrison needed to “fix the mess”.

“It’s getting to a pretty mad stage now. People are either going without or they’re getting ripped off, and the only alternative is to stand in lines for half a day (at testing centres),” Mr Chalmers told Today.

“What’s making people absolutely filthy about this is they know they’ve got a PM who’s prepared to spray tens of billions of dollars around, wasting it on marginal seat rorts but says he can’t afford to make tests affordable for people. 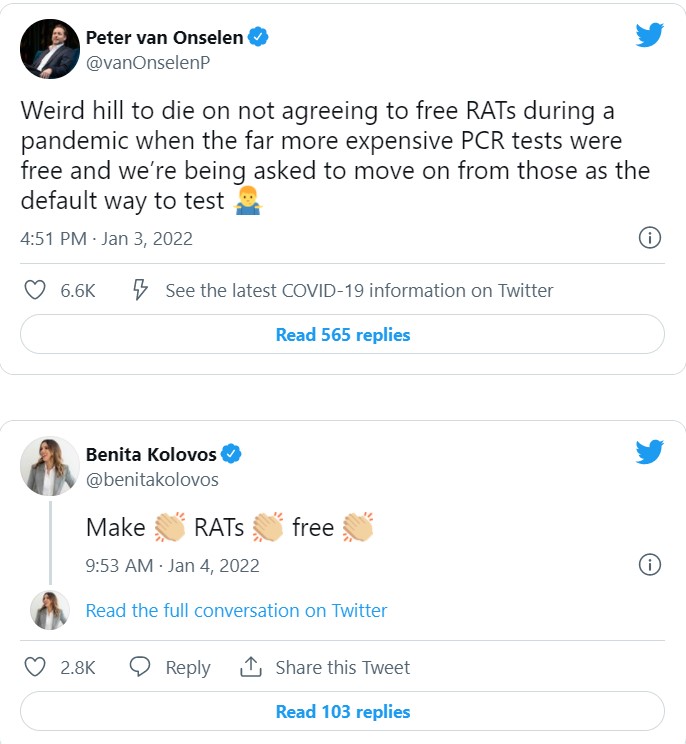 “We can’t have a situation where people at their most vulnerable and most contagious are wondering around shopping centres looking for tests that don’t exist, and if they do they’re getting ripped off, and if they don’t they’re being left undiagnosed which is leaving their co-workers and loved ones more vulnerable.

“The question for Scott Morrison today is how many people have to go undiagnosed, ripped off or faint in testing queues before this bloke will do his job and take responsibility and fix this mess he’s made of rapid antigen tests.” 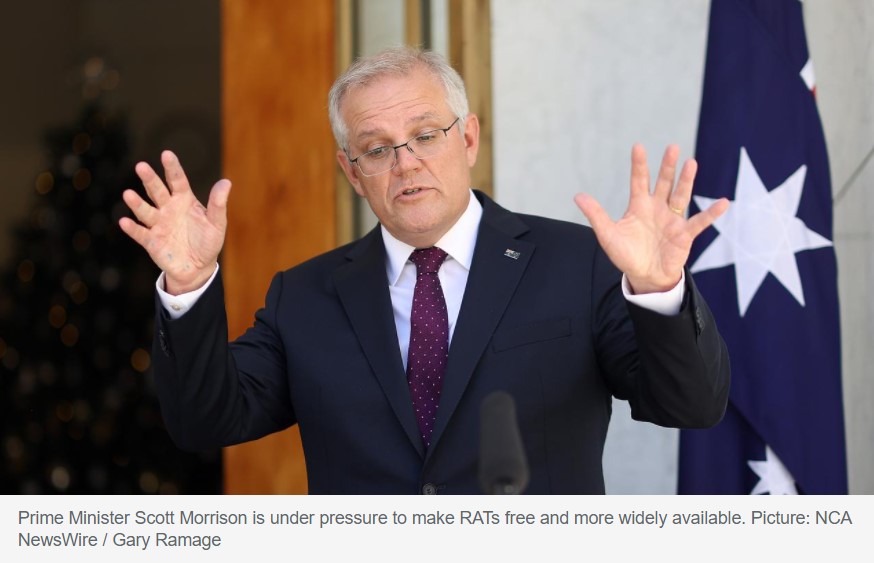 “I, the AMA, and other groups asked the government about the testing strategy several months ago … it was put to us that the government would not intervene when the private market could take over,” Dr Moy said.

“The problem is (we are) relying on the private market during a health crisis and there is a market failure … we have … inability to supply (RATs) at a critical moment, a lack of equality of access.

“There is poor communication about when people should be using them.

“The lack of (RATs) is completely hampering personal responsibility and it is a frustration that is a glaring hole in the current management of Covid.”