The Therapeutic Goods Administration is investigating reports retailers are selling repackaged rapid antigen test kits for a premium, despite warnings of multimillion-dollar penalties for companies that breach labelling rules.

The tests, often bought in bulk initially, are resold inside zip-lock bags at petrol stations, convenience stores and small supermarkets, and are sometimes missing crucial components for their correct use, such as vials or instruction sheets.

Alice, a mother of two from Clovelly in NSW who did not want her surname published, said she was shocked to learn two rapid tests her husband had bought on January 8 at a Randwick petrol station for $30 each did not include the testing tube used to hold the chemical solution into which the swab should be dipped to obtain a result.

The 37-year-old said the tests appeared to have been pulled out of their original box, repackaged individually, and placed inside envelopes with a photocopied sheet of instructions that missed key information about how to perform the test.

“It was cut out with wonky scissors, so it was all just super dodgy,” Alice said.

“I felt really ripped off and just infuriated that people, individuals, are making a profit out of a crisis situation.”

Alice, who reported the incident to the Australian Competition and Consumer Commission, said she walked in on petrol station staff repackaging the bulk tests when she went back to complain about the purchase.

“I just can’t believe that in this day and age in Australia these businesses are getting away with selling individual items for profit when they should just be sold in their package,” she said.

Ben, who lives in Footscray in Victoria and also asked that his surname not be published, said he bought repackaged rapid antigen tests from a petrol station in Williamstown for $25 each.

The tests were in zip-lock bags, and instructions in them directed users to stand the test vials up in the kit’s box – which was not included. 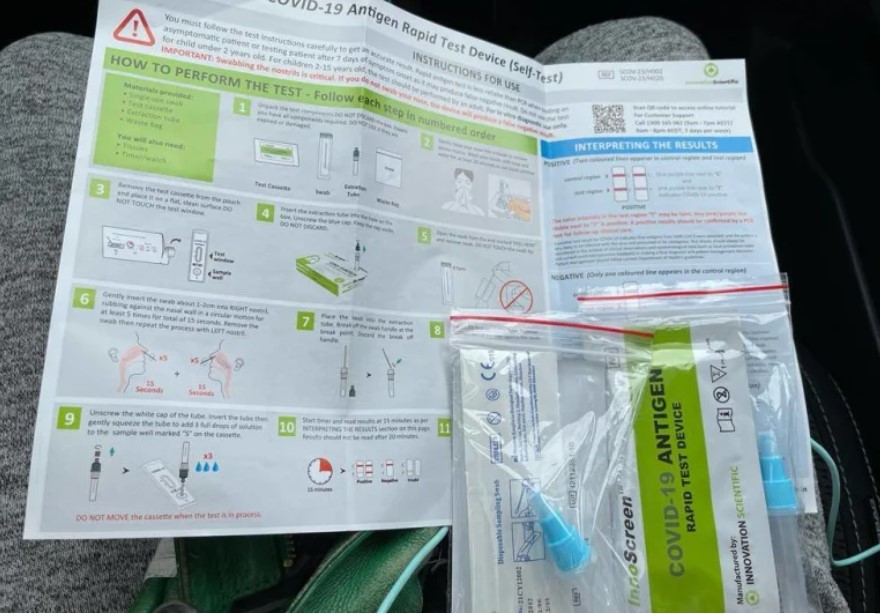 A test Ben purchased from a petrol station at Williamstown in Melbourne’s south west.

He said he was not surprised to see retailers trying to make a premium off the sought-after tests. “People seem to keep taking advantage of the situation,” Ben said.

Multiple people on social media reported buying rapid antigen tests in plastic bags without instructions from a gift shop at Ballarat in Victoria.

One user, who asked to remain anonymous, turned to Facebook for help on how to use the tests.

“I thought it was a bit strange that the tests came in a plain clear bag,” she said.

“I actually went back to the store and refunded three of the five tests I bought.”

Readers who contacted The Age and The Sydney Morning Herald also reported instances where tests had been sold inside individual zip-lock bags without the box required to hold the vial. Others spoke of purchasing kits inside sandwich bags and being asked to photograph the instructions.

A spokeswoman from the Therapeutic Goods Administration confirmed the watchdog was investigating allegations testing kits had been repackaged and relabelled illegally.

Under current regulations, COVID-19 tests can only be removed from their original packaging with the authorisation of the manufacturer.

“This includes opening bulk boxes of kits not intended for individual resale, and supplying them in smaller quantities,” the spokeswoman said.

“Any updated packaging and labelling to be supplied with the devices must be TGA-approved versions that have undergone review as part of a regulatory submission.”

Breaching the rules carries fines of up to $888,000 for individuals and $4.44 million for corporations, or civil penalties of $1.11 million and $11.1 million respectively.

Australian Competition and Consumer Commission chairman Rod Sims said on Monday it was “beyond outrageous” for retailers to be selling single rapid test kits for more than $30.

The consumer watchdog revealed it had received nearly 2000 reports of rapid tests being sold for as much as $100 per test. This was despite the tests costing between $3.95 and $11.45 at a wholesale level.

The commission was contacted for comment on Tuesday, over reports some retailers were offering rapid antigen test kits as a gift when customers purchased other products.

Melbourne coffee retailer St. Ali apologised to customers on its website on Monday, after it offered subscribers a free two-pack of the tests with a minimum purchase of $159.99.