The Diesel Market Looks at Risk of Price Spikes

A slump in global diesel stockpiles has left the market vulnerable to price spikes.

In Europe, the continent’s largest oil refinery is starting work that will curb its output. At the same time, U.S. refiners are prioritizing making gasoline, further eroding supply. And in Asia, China has cut its fuel export quota.

All that has helped to further shrink inventories globally and drive up the premium the fuel commands over crude — the key metric for oil refineries. With output and stockpiles curbed, that’s created a market increasingly sensitive to either demand exceeding expectations, or out-of-the blue output reductions at refineries. 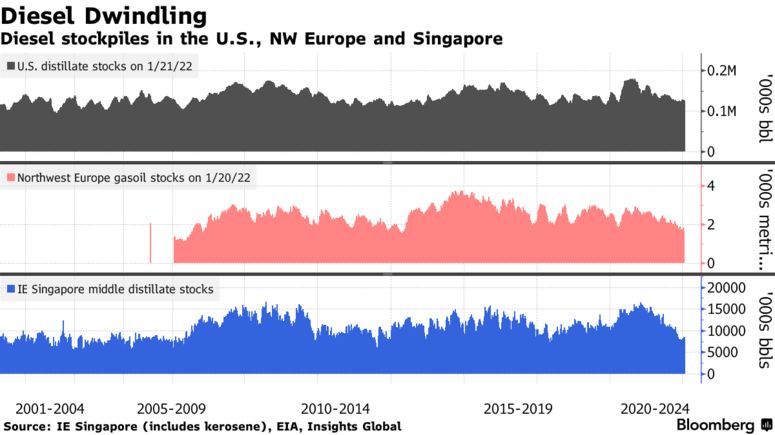 “We do see the potential for a sharp upward correction in diesel prices during the first quarter if demand comes in stronger or there are a number of refinery outages,” said Alan Gelder, vice president for refining, chemicals & oil markets at consultant Wood Mackenzie Ltd.

Diesel is used in transport and trucking as well as heavy industry. It’s also one of the main products that oil refineries churn out, meaning price moves are part of the wider inflation story that’s pressuring governments and central banks the world over.

In the U.S. and Singapore, data point to diesel inventories being at multiyear seasonal lows. The same is true in northwest Europe’s oil trading hub, where stockpiles held in independent storage are 40% below the five-year average. Reduced refinery runs are a big part of the problem, particularly in Europe, Gelder said. The region’s plants are struggling with high costs of natural gas and carbon emissions.

Supply is also being tightened by much lower Chinese fuel export quotas and, potentially, stronger jet fuel prices, which could incentivize refiners to switch production away from diesel. Meanwhile, global demand for the road fuel is set to reach 99.7% of pre-pandemic levels this year, according to the International Energy Agency.

Diesel is less vulnerable to supply shocks than crude — there are many more refineries than major crude suppliers — and they are generally less subject to government intervention.

Still, diesel’s tightness does tie into the oil market’s broader concern about a lack of spare production capacity.

“There is limited product inventory to counter any disruptions in crude supply,” Gelder said.