As food disappears from Australian shelves, a deadly conflict in a country that many people have barely heard of is one unlikely catalyst.

As many supermarkets across the nation grapple with low stocks and worker shortages, it’s clear how vulnerable supply chains can be, even for the things most of us take for granted.

From long waits for automotive parts being shipped in, to the shortage of AdBlue largely created by a Chinese export ban on urea, Australians have been given quite an education on how quickly these key elements of our daily lives can be undermined.

The truth is we live in a very different world to the one we were in when we entered the pandemic, back in January 2020.

Between the impact of the pandemic itself and the extremely large government response, a low inflation and relatively stable world has been transformed.

In nations around the world, cost of living pressures are undermining governments and societies, as the legacy of global supply chain issues and the biggest peacetime government cash splash in history continue to be felt.

The risk now is this won’t be a short hangover from the pandemic, but the beginning of a longer period of geopolitical and social destabilisation similar to the late 1920s and early 1930s.

In recent days the eyes of the world have turned to the central Asian nation of Kazakhstan, as the former Soviet republic grapples with the worst protests and civil unrest in the country’s history.

For a former Soviet Republic, Kazakhstan has generally been one of the few relative success stories, enjoying a stable nation and the economic dividends of strong energy and mining sectors.

That is until the past few weeks. 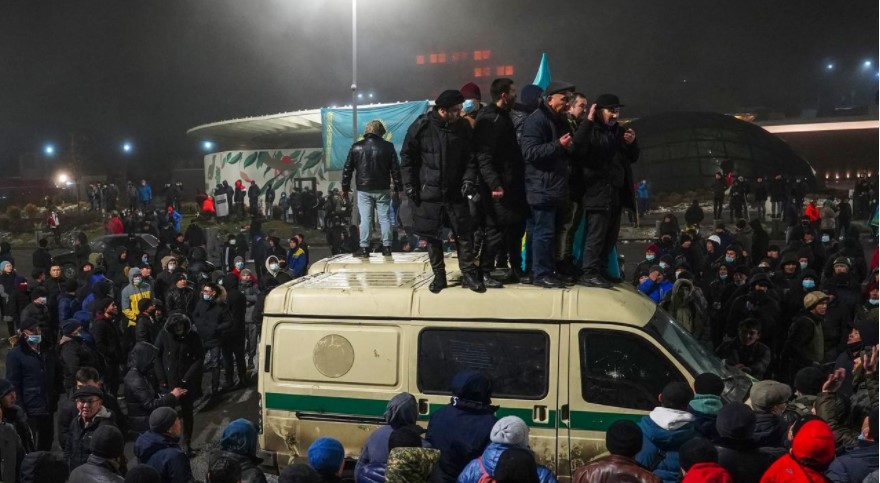 Protesters take part in a rally over a hike in energy prices in Almaty, Kazakhstan on January 5, 2022. Picture: Abduaziz Madyarov/AFP

One of the main catalysts for the protests was the doubling of the price of liquefied petroleum gas (LPG), a fuel that is abundant in Kazakhstan and is used by most in their cars.

This occurred as a result of the country ending state subsidies for the fuel and allowing the market to dictate prices.

Marius Fossum of human rights organisation the Norwegian Helsinki Committee in Almaty (the largest city in Kazakhstan), said the fuel prices had brought deeper-held grievances to the surface.

“Fuel prices were a catalyst that triggered mass protests over long-held grievances in a country riddled by corruption, lack of political choice and civil freedoms and where ordinary people often struggle to make ends meet while the elite lead luxurious lives,” Mr Fossum said.

As the violence escalated, Kazakh security forces were ordered to shoot to kill by President Kassym-Jomart Tokayev, who blamed foreign-trained terrorists for the social unrest.

More than 160 were killed, over 5000 were arrested and at least 18 security officers were killed including at least one police officer who was beheaded.

While Kazakhstan’s social unrest has been particularly violent compared with other nations facing similar issues, it’s also not unprecedented amid these types of conditions.

In 2011, a rapidly rising cost of living played a significant role in the Arab Spring movement, which brought down multiple governments across the Middle East and North Africa, and left Syria mired in a civil war that continues to this day.

Why it matters to the world and Australia

As the ninth biggest exporter of oil in the world, a significant source of gas for Europe and China and the producer of 40 per cent of the world’s uranium, any issues in Kazakhstan that prevent the normal operation of these industries could have potentially huge consequences on already volatile commodity prices.

But the real crux of the issue isn’t Kazakhstan itself; it’s the issues Kazakhstan represents for the wider world.

Despite the former Soviet Republic being ruled with an iron fist and the President having the Russian military on speed dial, existing domestic issues combined with global cost of living pressures to create a level of unrest that not even Cold War style authoritarianism could suppress.

As frustration continues to brew in all four corners of the globe over inflation, rising inequality and domestic issues, the risk is that more nations find themselves facing social unrest and potentially a more serious conflict.

As nations try to avoid these types of issues from arising, they take actions to attempt to ensure positive outcomes for their citizens, even if it’s at the expense of business profits or geopolitical standing.

Australia has already experienced one of these events in the form of the Chinese export ban on urea, which created the AdBlue shortage.

Ironically the Chinese ban on urea had nothing to do with AdBlue and was targeted at urea’s main usage as a key ingredient in some varieties of fertiliser.

With fertiliser prices recently hitting record highs and concerns building in the halls of power around the world over how this could feed into the food prices their citizens pay, both China and Russia have banned or limited exports of fertiliser and key fertiliser ingredients.

As these actions come to pass, they act like a rock being thrown into the middle of a pond, often creating a ripple effect of unintended consequences around the globe, which can then prompt another metaphorical rock to be thrown in the pond by another concerned government.

With the last of the pandemic stimulus expected to feed through the global economy this year, the curtain will finally be pulled back and the true state of things will be revealed.

At the same time, some central banks in emerging market nations are furiously raising interest rates in an attempt to counter inflation, with the US Federal Reserve expected to follow as early as March.

Ultimately, Kazakhstan is the canary in the coalmine for more potential issues on the horizon and no nation will be immune to all of them, even our quiet little corner of the southwest Pacific.