If ambition counts for anything, this unassuming electric SUV could be the next big thing for early adopters.

BYD is short for Build Your Dreams and the company importing it into Australia, EVDirect, dreams of usurping Tesla as the top-selling EV brand in the country in its first 12 months on sale.

As other carmakers struggle to secure adequate supply of EVs for Australia, BYD says it will be able to import 1500 vehicles a month from launch.

A short suburban drive of a left-hand drive prototype suggests the Atto 3 is capable of attracting a decent following. Whether or not it can shift that much metal is open to debate.

The Atto has an interesting interior design that blends hi-tech elements with a clean and presentable cabin and a couple of distinctly wacky features, including three red strings on the doors that you can strum like a guitar. 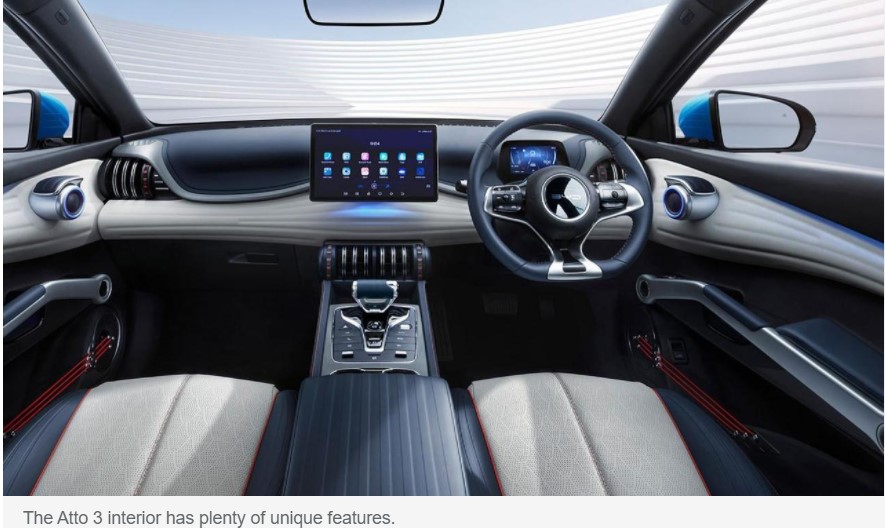 The handles are an unconventional shape and are placed high on the doors, while the gear shifter in the centre console looks like an aircraft joystick.

The tablet-like centre screen can swivel from landscape to portrait orientation at the press of a tile, allowing the driver to scroll through their Instagram feed while they’re waiting for the car to recharge.

A sophisticated 3D parking camera shows a birdseye view of the car, including what’s on the road beneath the car.

Our example still had Chinese lettering on the flat-bottomed steering wheel and screen menus, but the overall design, while a little chintzy in places, is likely to appeal in the showroom, particularly at the price.

The 150kW/310Nm electric motor feels lively off the mark and unlike some front-drive EVs with similar outputs, it gets the power to the ground without squealing the front tyres thanks to electronic intervention. BYD claims a 0-100km/h time of 7.3 seconds.

At speed, it feels stronger, delivering a strong surge of power when asked to overtake.

The ride feels floaty and the car takes a while to settle after bigger bumps, while the steering feels a little artificial and oddly weighted. There’s also some noticeable pitching under brakes.

Through corners – albeit at suburban speeds – it sits reasonably flat and there’s adequate grip from the tyres.

It’s not as accomplished as similar efforts from Hyundai and Kia, but at this price the average punter will find the Atto 3 to be perfectly acceptable urban transport.

Customers can choose from a standard 50.1kWh battery offering 320 kilometres of range, or upgrade to a 60.4kWh battery with 420km range for an extra $3000.

Slightly smaller than a Mazda CX-5 or Toyota RAV4, the Atto 3 rides on 18-inch alloy wheels and has a powered tailgate for easy access to the boot.

The back seats provide generous legroom, although the sunroof eats into headroom. The boot is a decent size but there’s no spare, only an inflation kit.

The brand is taking a different approach to conventional car dealerships.

Customers order the car online, and then collect it from an independent Mycar workshop.

Owners retrieve their new car from Mycar in South Melbourne, Sydney’s Chatswood or Brisbane’s Stafford for free. Delivery to regional areas such as Bathurst or Ballarat adds $495 to the bill.

That makes it a little more expensive than the discontinued MG ZS EV that sold for $43,990 drive-away.

A new version of the MG is just around the corner, which could drive up prices for Australia’s cheapest electric car.