Electric vehicles are set to reach range parity with petrol vehicles by 2024, according to research from Bell Resources, an electric vehicle resources company.

Bell Resources predicts that petrol vehicles could have similar range expectations to their petrol-fuelled counterparts within the next two years.

This news comes after two big developments this week within the Australian electric vehicle space, the first being new electric vehicle sales tripling between 2020 and 2021 and the second being NSW announcing a state-wide ultra-fast charging rollout plan.

Now, Bell Resources reckons electric vehicle batteries will be larger within two years, capable of travelling the same distances without needing to refuel (or recharge) more often, reaching range parity with petrol-guzzling alternatives. The company also reckons improvements in fast charging will help to facilitate the shift to EVs over the next two years and that policy changes over the past 12 months have massively impacted EV adoption.

“The elimination of range anxiety is significant given that Australian cities occupy relatively large geographic areas, a limiting consideration that currently acts as a barrier of mainstream EV adoption,” says Mark Avery, the founder and CEO of Bell Resources.

That’s well below what you can expect from a petrol-fuelled car, which typically see a low of 650 kilometres on a full tank and a high of 1,875 kilometres.

Bell Resources has made a few additional bold predictions for the electric vehicle market, in terms of market share and price.

The company thinks that, over the next 10 years, the Australian EV industry will no longer require government incentives to normalise EVs, as they’ll account for 59 per cent of the total passenger vehicle market globally and 30 per cent of new passenger and light commercial vehicle sales in Australia. EVs entering the mainstream within 10 years? Love to see it. 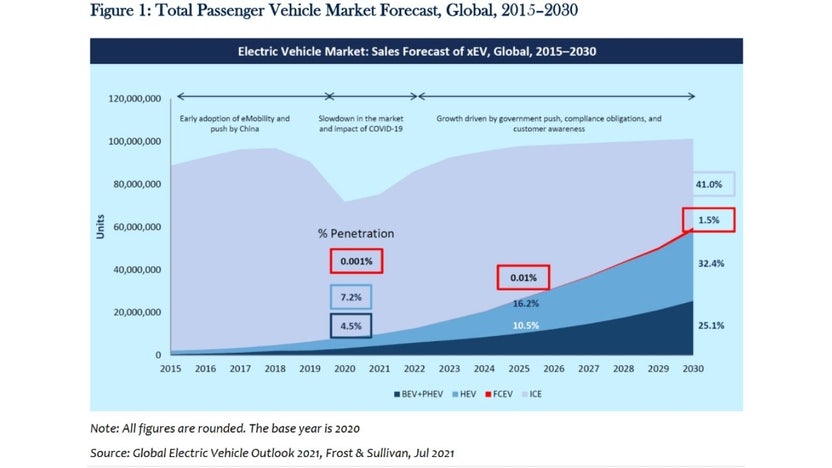 “We’re also predicting that EVs will reach cost parity in Australia by 2030 – this will significantly boost uptake as well as the need for charging infrastructure,” Avery added.

Currently, electric vehicles are a necessary step for decarbonisation, but it’s hard to look past their high prices and low ranges. Right now, the cheapest EV is about $45,000 (the MG ES EV), with only a short range within 250 kilometres on a full tank.

“Australia is well-positioned to establish a thriving EV market, increasing the need for a cost-effective and accessible charging infrastructure service. This would be aided by clear and detailed EV policies set out by the Federal government. This is something we should hear more about as we ramp up toward the upcoming Federal election,” Avery concluded.

I’m all for EVs becoming more affordable and longer range: right now they’re largely only an option for wealthier drivers. Right now there aren’t many good, cheap options in Australia, or internationally for that matter.

If you’re interested in buying an electric vehicle, you can check out new ones here or check out government incentives here.

Extracted in full from: EVs Could Have the Same Range As Petrol Vehicles Within Two Years (gizmodo.com.au)