A new report on the nascent green hydrogen industry predicts “exponential” growth for hydrogen electrolysers in coming years, with Australia expected to reach cost parity with so called “blue hydrogen” by 2027.

“State funding reached billions of dollars, electrolyzer sales doubled, as did the number of countries with hydrogen strategies. This year, we see exponential growth. Electrolyzer sales are on track to quadruple.

BloombergNEF says the growth won’t come from the often touted sector of passenger transport, because they won’t be able to compete with EVs. 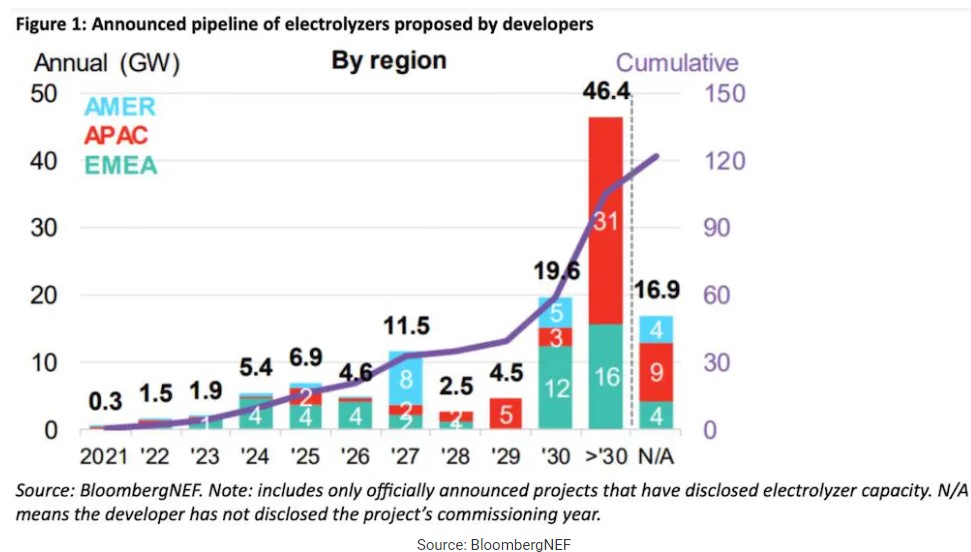 Indeed, the report says demand for clean H2 in industry is set to exceed that for cars many times over, and more countries are expected to announce support for H2 in pursuit of net zero. But stronger policies favoring decarbonisation will be needed to keep the growth going.

There are various forms of hydrogen, however, and not all are as clean as the other. Most pundits, and major investors such as Australian billionaire Andrew Forrest, insist that green hydrogen (using only wind and solar as the feedstock through electrolysers) are truly zero emissions.

Forrest has been particularly outspoken about what he calls the Australian government’s “greenwashing” through its support of blue hydrogen – using fossil fuels and trying to offset the emissions through carbon capture and storage or buying carbon credits.

According to BloombergNEF, Australia has the sixth biggest government support for “low carbon” hydrogen technologies in the world, and ranks highly on the number of projects expected to commence in coming years. 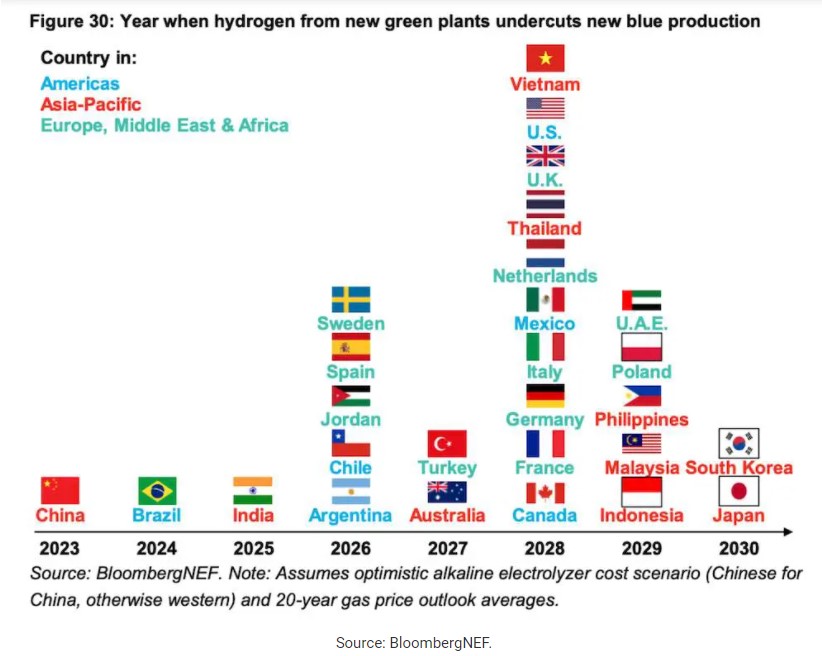 Australia, according to BloombergNEF, is expected to reach cost parity with blue hydrogen by 2027, and is likely to build up to 155MW of electrolyzers in 2022, including 75MW by Hydrogen Utility (H2U) and 80MW by Forrest’s Fortescue Future Industries (FFI), a subsidiary of his iron ore group company Fortescue Metals.

It notes that Plug Power has agreed to supply FFI with 250MW of electrolyzers, stating ‘delivery is planned for the second half of 2022’.

However, Plug Power targets a total of 100MW shipments (excluding supply to its own projects) in 2022. “We expect a partial delivery in 2022 to FFI, of up to 80MW. Accounting for possible shipment delays, our conservative scenario for electrolyzer shipments in Australia this year is 128MW.”

It also raises questions about the future partnership between FFI and Plug Power, which was supposed to include a factory in Queensland with a capacity of 2GW a year.

It notes FFI announced a successful internal alkaline electrolyzer production test two months after Plug Power disclosed the JV plan. “We are thus skeptical about the implementation of the 2GW ambition and only expect 500MW capacity in 2024,” it says.

As for blue hydrogen, BloombergNEF questions its future on economic grounds.

“Blue hydrogen will struggle to compete,” it says.

“But, in countries with carbon prices or net-zero targets, developers or customers of such projects will increasingly be at risk of having to pay for the 5-40% of CO2 that is typically not captured, and potentially any methane leaked, either by paying a carbon price or by buying offsets.

“This will hurt blue hydrogen’s profitability.”