A mining company has received a $185 million conditional loan from the federal government to mine what it says is the “world’s second largest graphite deposit”, as Australia strives to become a global player in critical minerals.

The loan, to Renascor Resources Limited, will almost completely cover the cost of the company’s $205 million graphite project on South Australia’s Eyre Peninsula.

Graphite is a key material in the production of lithium-ion batteries, which are used to make electric vehicles and smartphones.

Renascor’s development includes a mine at the Siviour graphite deposit, near the tourist and fishing town of Arno Bay.

Under the proposal, another three facilities would manufacture what is known as “purified spherical graphite” (PSG) to make the substance suitable for batteries.

Currently, China is the only country in the world that produces PSG, with global demand expected to skyrocket as economies pivot away from fossil fuels.

“This is an opportunity to develop a world-class, globally competitive downstream processing capability in a critical mineral that is fundamental to the development of the electric vehicle revolution,” he said.

“In 2021, lithium [demand] exploded, and we think graphite has the potential to do that, which means there’s an opportunity to build what will be a major industry in South Australia for many years to come.”

Trade Minister Dan Tehan said the project would promote Australia as a trusted supplier of critical minerals to the world.

“At a time of booming global demand for smartphones, electric vehicles and other technologies, this commitment from the Australian government positions Australia strongly into the future in the critical minerals sector,” he said.

Production by 2024 under ‘aggressive’ time frame

Renascor’s loan is conditional on a range of assessments, including environmental studies and approvals from both the South Australian and federal governments.

But Mr Christensen remains optimistic that final approvals will come through by the end of 2022, with construction to begin in 2023 and full-scale production by 2024.

“We have to demonstrate we have done all the fine engineering to a very high standard, all the regulatory approvals need to be in place — then we need to secure a market,” he said.

“At that stage we would hope to meet whatever conditions we have with the Australian government as the lender, then we build the facility, then we start producing.” 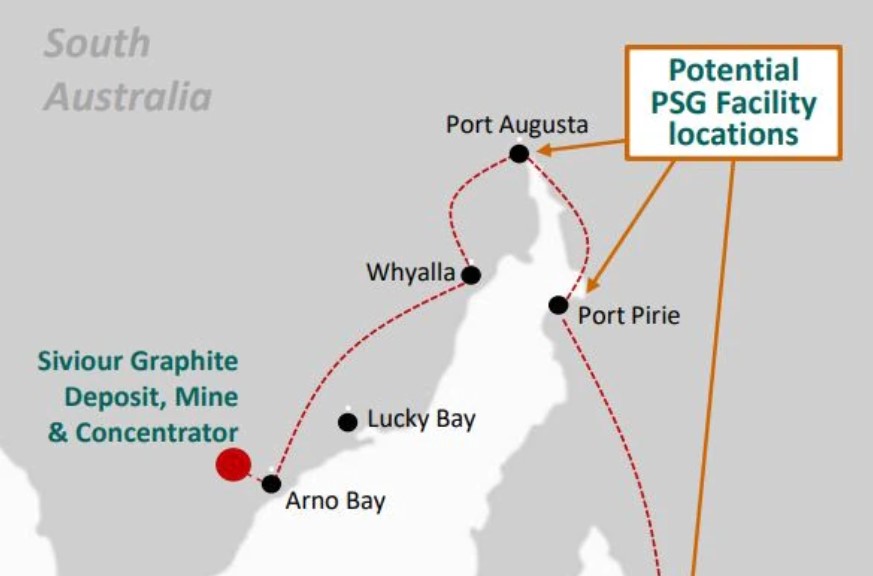 Renascor anticipates the time frame will be accelerated by the shortage of raw materials for electric vehicle production, and therefore heightened demand.

“It depends on us executing all our work, but the backdrop is a significant lack of materials to build electric vehicles,” Mr Christensen said.

“It’s an aggressive time frame but given the growth of the market … you would need over 90 projects of our size to meet the anticipated demand.”

“Ultimately it’s the regulators within the Department of Energy and Mining, not the minister, that determines whether Renascor gets the tick of approval,” he said.

“As far as I can see they’re doing everything right … and I’m quite sure the federal government would not have given them conditional approval for $185 million if that government didn’t think this was a project with real legs.”

In its initial phase, the project is expected to produce 28,000 tonnes of purified spherical graphite and employ at least 200 people.

“It’s a high-grade graphite deposit and they’re a fair way down the track in developing the suite of products they’d sell. They just need to go through the hoops and loops,” Mr Strachan said.

He described so-called “battery metals” as “the way of the future” given the recent growth in market value.

“Over the past two years the price of lithium carbonate has seen a six-fold increase,” he said.

“The price of cobalt, which also goes into these batteries, has more than doubled.

“Graphite is in demand, [the] nickel price has tripled. Battery metals are growing in value.”