From the petrol pump to the supermarket checkout, Australians are being slogged with record price rises as wages struggle to keep pace – and there’s “nowhere to hide”.

From the petrol pump to the supermarket checkout, Australians are being slogged with record price rises as wages struggle to keep pace.

Figures from the Australian Bureau of Statistics last month revealed consumer prices rising at their fastest pace since 2008.

Annual consumer price index (CPI) inflation increased to 3.5 per cent in the December quarter – well above the Reserve Bank’s target band of 2-3 per cent – largely due to housing construction costs and petrol prices.

“Trimmed mean annual inflation, which excludes large price rises and falls, increased to 2.6 per cent, the highest since June 2014,” the ABS said.

The overall price of goods rose 4.3 per cent annually, with “strong demand and supply disruptions” pushing clothing up 6.8 per cent, motor vehicles up 6.3 per cent, furniture up 5.7 per cent and car parts up 4.5 per cent.

“A little bit of inflation is a sign of a strengthening economy, however too much hurts consumers.”

Ms Megginson said while the price increases so far were “relatively mild” compared with the US, UK and Europe, nearly three-quarters of Australians surveyed by the comparison site were either “extremely or somewhat stressed” with their current financial situation.

“The increase in fuel prices is a real kicker,” she said.

“I remember getting my first car around 20 years ago and I could fill up my tank with change from $20. Now petrol prices are nudging $2 a litre and petrol has become a high pressure budget line item for many, especially families.”

Fuel prices were the single biggest contributor to Australia’s inflation rate in the December quarter, with the strongest annual increase since 1990.

Transport costs in Australia’s eight capital cities rose 2.8 per cent during the quarter and were up 12.5 per cent compared with the same period in 2020.

“The automotive fuel series reached a record level in the December quarter due to higher global oil prices amid economic recovery and lower global supply,” the ABS said.

“The national quarterly average price for unleaded petrol increased to $1.64 per litre in the December quarter.”

Prices in some cities have now started to edge over $2 per litre, with premium unleaded touching $2.22.

“The average in Sydney got to $1.89, which is pretty alarming. All capital cities are exceeding their previous highest records. The wholesale price is $1.70, which is a new record.”

Brisbane continues to see the most expensive prices, recently hitting a new record average of $1.92.

Out of the capital cities with price cycles, Brisbane, Sydney, Melbourne and Perth are seeing “extremely dramatic prices when we get to the high point”, with Adelaide the one exception seeing lower prices for longer.

But Canberra, Hobart and Darwin are also breaking records.

Mr Khoury said prices were only set to increase further.

“The two factors which continue to plague global markets (are) obviously the Russia crisis, and OPEC and other oil-producing countries keeping a lid on production, forcing these prices up,” he said.

Petrol prices have now increased 108 per cent since the low point in April 2020, when the global economy first shut down due to Covid-19 and oil prices plummeted to near record lows.

“That’s going from one extreme to the other, but it certainly puts into context just how serious the situation has gotten,” Mr Khoury said.

“The fact that the record today is almost 20 cents per litre higher than the previous pre-Covid record is also a pretty clear omen that this is a serious global issue that’s having a dramatic impact on Australian families and the economy.” 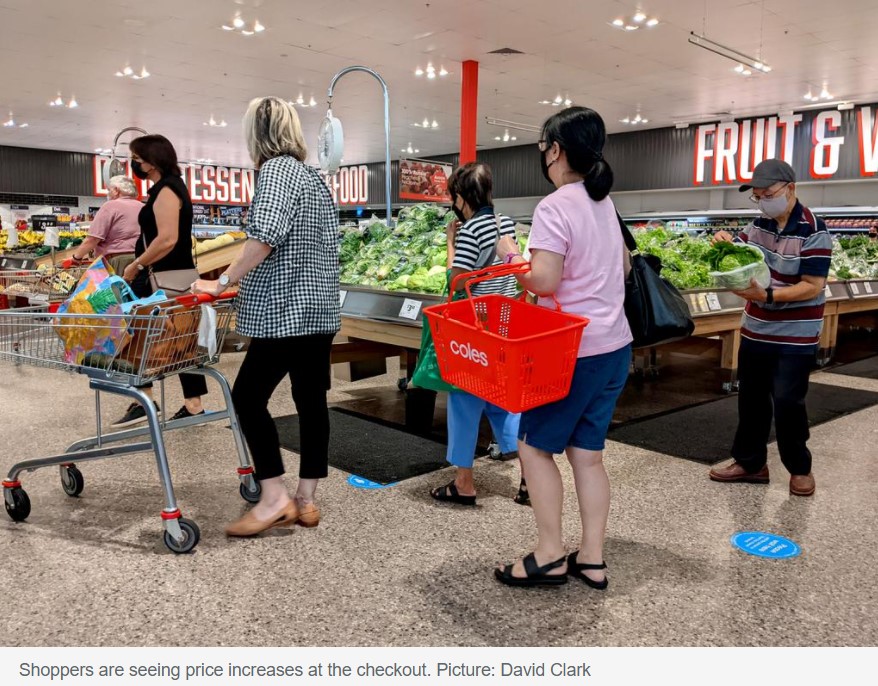 While the official CPI increase for food and non-alcoholic beverages was just 0.7 per cent over the quarter, anyone who has been to the supermarket knows prices are rising.

Finder notes that since the year 2000, groceries have risen by 59 per cent, while alcohol and tobacco have been hit the hardest over the past 21 years, rising by 212 per cent.

“People feel like their grocery bills have gone up far, far more than the official figures,” economist Jason Murphy noted earlier this month.

“Food price inflation is really happening. The official data hasn’t captured the latest movements, but when it comes out (in late April) it will confirm what people are feeling right now – prices are zooming up as 2022 begins.”

The latest ABS data showed sharp rises in certain food categories, with vegetables up 6.1 per cent and meals and takeaway food up 2.4 per cent as restaurants and cafes jacked up prices to “reflect higher input costs”.

Last week, Wesfarmers chief executive Rob Scott warned the retail group which owns Coles and Bunnings was “seeing inflationary pressures across the board”.

But he described it as an opportunity to compete more aggressively for shoppers on price.

“Often when inflationary pressure hits, companies ask themselves the question, ‘How much can they pass on to customers?’ And on some occasions they do get greedy and try to pass on even more and capture more margin,” he told The Australian Financial Review.

“We take the opposite approach. We say, ‘How can we further differentiate on price?’”

Retail Doctor Group founder Brian Walker said rising prices were due to a combination of Covid-related supply chain issues and natural events such as droughts and flooding.

“And for imported groceries, a container of merchandise is four times more expensive on average than it was a year ago,” Mr Walker said.

“That’s going to drive up pricing and have an inflationary effect.”

“We’re at the start of an inflationary cycle back up,” he said. “It’s very early days.” 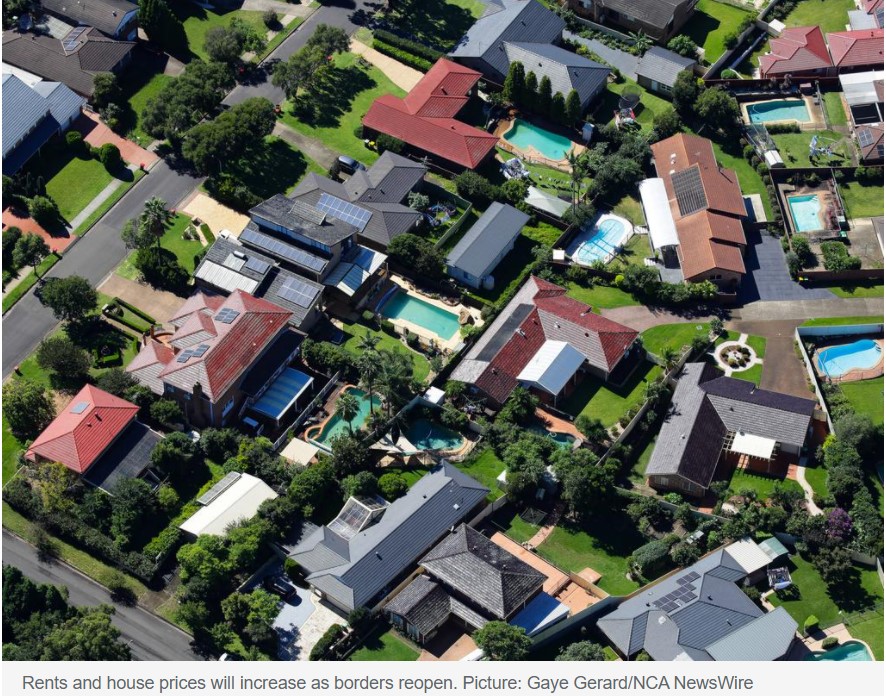 Dwelling prices across Australia rose by an eye-watering 22.4 per cent in the 12 months to January, according to CoreLogic.

“The typical Australian home is now worth $131,236 more than it was a year ago,” the research firm said last month.

House prices are rising faster than units, and three of the eight capital cities – Canberra, Sydney and Melbourne – now record a median house value over $1 million.

Brisbane saw the sharpest growth in 2021, with prices up 29.2 per cent, followed by Hobart and Canberra, then Sydney.

“It was quite a phenomenal rate of annual growth but it’s clear that growth rate is slowing,” said CoreLogic research director Tim Lawless.

“The quarterly rate is up 3.4 per cent at the end of January, that’s down from a recent quarterly growth rate high of about 7 per cent in May 2021, so it’s clear the market is losing momentum.”

Mr Lawless said the continued exodus from the two major capitals in the wake of the pandemic was contributing to the market slowdown.

At the same time, affordability is “becoming much more stretched” in the two cities with fixed rate mortgages on the rise since April last year.

“There is a normalisation in stock levels as well, more listings are coming on the market and not selling quite as quickly, so there is a little more choice,” Mr Lawless said.

“Residential construction costs were up 7.3 per cent, which is a dramatic increase in the cost of building a new home, and land prices are up about 13 per cent as well,” Mr Lawless said.

Things are no better for renters, who are also seeing their bills sharply rising.

While the CPI data from the ABS showed rents increasing 0.4 per cent in the December quarter, CoreLogic data shows rents up 9 per cent over the past year.

Hobart, Darwin and Brisbane all recorded double-digit increases of 11 per cent, 10.7 per cent and 104.4 per cent respectively.

Mr Lawless said the discrepancy was due to measuring “flow versus stock”.

“The CPI measure is a static sample, it includes Defence housing and some of the more government-funded rental opportunities as well, whereas we’re looking at rental listings,” he said. “We normally see CPI follow private sector measures with a lag.”

“We know the biggest impact on the housing market is from overseas migration – in the short- to medium-term in rental demand, progressively that carries through to purchasing demand,” he said. 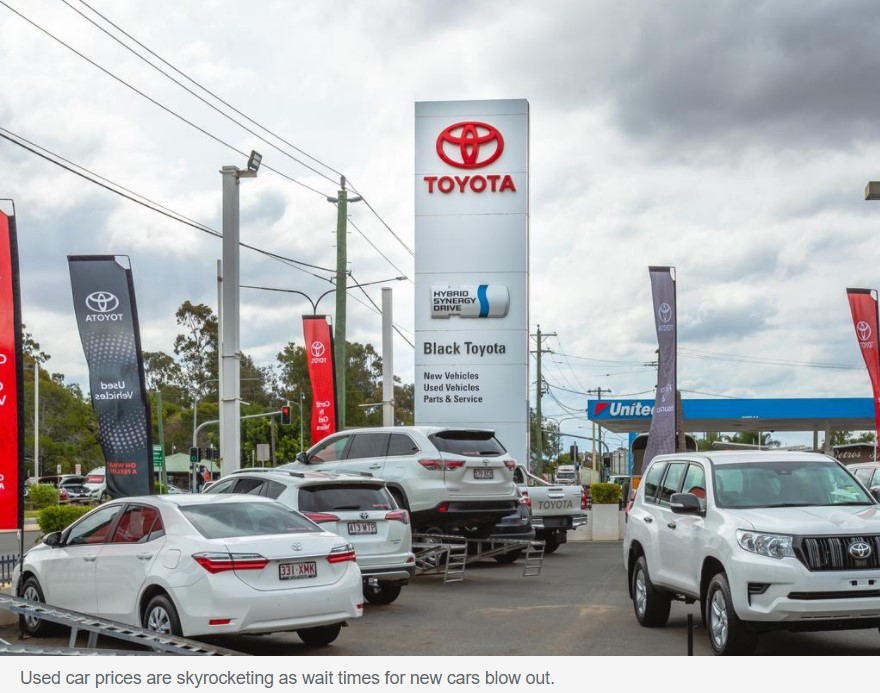 Ongoing chip shortages have put the brakes on new car deliveries for the past two years, causing waiting times blow out to up to a year.

Those existing issues have been compounded by Covid-related shipping delays and supply chain disruptions – seeing Aussies turn to the used car market instead.

In October, market leader Toyota Australia took the unusual step of apologising to thousands of customers stuck in the queue.

Toyota Australia’s head of sales and marketing Sean Hanley revealed at a media teleconference that three-quarters of the car maker’s showroom line-up had a waiting time of up to six months, Drive reported.

“Toyota understands your frustration, and I sincerely apologise for these delays,” said Mr Hanley, who described the semiconductor shortage as “the biggest challenge facing the global automotive industry today”.

“With global demand for new vehicles recovering much faster than anticipated since late 2020, (semiconductor suppliers) haven’t been able to keep up,” said Mr Hanley.

“In some cases, production has been refocused to meet demand from other sectors, such as consumer electronics – game consoles and smartphones.”

“But we’ve moved from a longstanding situation in Australia where discounts were readily available on new cars – end-of-financial-year sales, constant drives from manufacturers and dealers to move cars and engage in a high-volume strategy,” he said.

“We’re not seeing those anymore because of the supply shortage, so customers might feel they’re paying more.”

Mr Voortman said in general, waiting times for new cars ranged from three to six months, and up to 12 months on rare occasions.

As a result, prices for used cars have been skyrocketing.

“We’re generally seeing increases of between 10-30 per cent, and that’s been sustained for almost two years now,” he said.

“There’s no doubt one of the main reasons people are turning to used cars is they just can’t get a new car as quickly as they’d like. The used car market is probably more responsive to the needs of customers, and a lot of those customers are willing to pay more than they otherwise would.”