“We’re not behind:” Tim Wilson’s optimism on Australian EV uptake defies the evidence

Assistant minister for industry, energy and emissions reduction, Tim Wilson, has rejected assertions that Australia is falling behind international peers when it comes to electric vehicle uptake, claiming Australia is only lagging behind “smaller countries”. But the data suggests otherwise.

“I actually disagree with the idea that we’re behind. And I’m not saying that defensively. I mean, we’re basically where most of the global community is in terms of a pathway towards electric vehicles,” Wilson told the podcast.

“There are obviously some countries doing better than us, but they’re smaller countries and they have much more aggressive policies. And the grid is also in a better position to be able to support it.”

The data shows the market share of electric vehicles growing to 2.39 per cent in 2021, including a leading 5.87 per cent market share in the ACT – but these figures still well below those recorded by Australia’s international peers, including much bigger countries.

While some countries with smaller populations are leading the global shift to electric vehicles, including Norway, Sweden and the Netherlands – some much larger countries are also leaving Australia behind.

An analysis published by the International Energy Agency shows countries including Germany, France and the United Kingdom – all nations with a larger population and economy than that of Australia – have achieved a market share for electric vehicles, including both battery electric and plug-in electric vehicles – of above 10 per cent.

In each case, battery electric vehicles have captured around 50 per cent of the “electric” vehicle market – with the remainder being plug-in hybrid models – meaning the pure EV market share is above 5 per cent.

China – the world’s most populated country – has grown to dominate the global electric vehicle market, responsible for more than half of all global sales, amounting to 3.31 million new energy passenger vehicles in 2021. 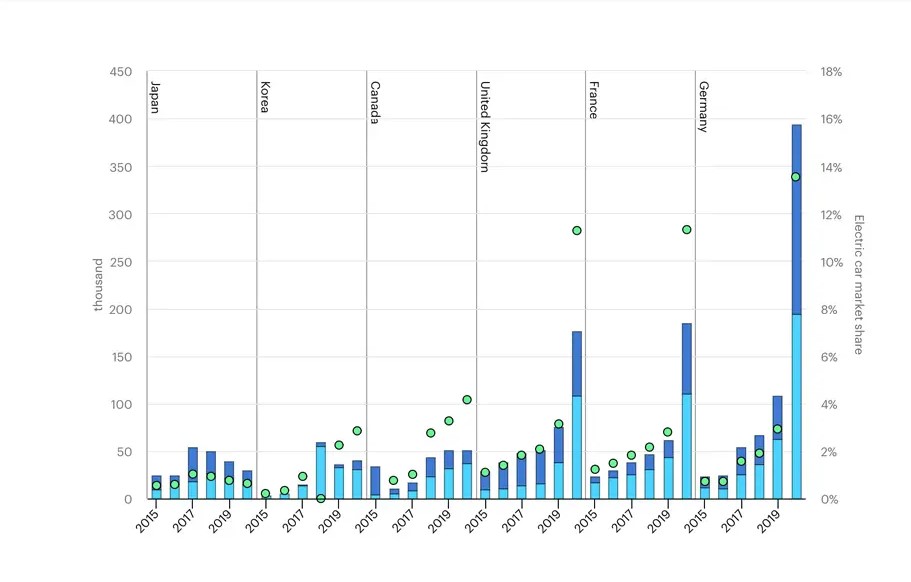 “It’s great that some state governments have received the global message, but at a national level we’re stuck in the past,” Jafari said at the time.

“We desperately need the federal government to introduce Australian EV rebates alongside fuel efficiency standards, just like other developed nations. If we get these changes, you’ll see sales figures really rocket ahead.”

Wilson told the podcast that there were some misconceptions about the costs and performance of electric vehicles that had prevented some potential purchasers from making the switch to EVs.

“I’ve gone and looked at studies from Australians about what their biggest concerns are for electric vehicles. Cost is number one in most places,” Wilson said.

“Whether that’s rational or not in terms of range anxiety, it exists, and it becomes a psychological block for people.”

“So, we need to get over those preconceived ideas, or limitations, that exist for people to electric vehicles. That’s going to be a journey to build confidence in more people,” Wilson added.

It’s an intriguing insight from Wilson, who is part of a Morrison government that has directly cultivated some of the negative pre-conceptions of electric vehicles.

The Morrison government has been openly hostile towards electric vehicles, refused to put in place national policies to support uptake and has spent much of the current term of government promising a ‘National EV Strategy’ that failed to deliver anything of substance.

In the lead up to the 2019 federal election, prime minister Scott Morrison claimed that Labor’s support for increased electric vehicle uptake would “end the weekend”.

Extracted in full from: “We’re not behind:” Tim Wilson’s optimism on Australian EV uptake defies the evidence (thedriven.io)