Why fuel prices in Australia are SOARING

Fuel prices in Australia are reaching record highs on the basis of continuing fears of a war between Russia and the Ukraine, with some parts of the country reporting prices well over $2 a litre.

Petrol prices app Motor Mouth is reporting an average Brisbane petrol price of 191.6 cents per litre, though one service station in Morayfield was selling fuel at 217 cents a litre on Tuesday.

Similar prices are being experienced in Perth, while despite greater competition between outlets in the major capitals of Sydney and Melbourne, prices as high as 189 cents a litre have been seen outside some service stations.

The current average price in Sydney is 177 cents a litre.

Mark McKenzie, CEO of industry peak body Australasian Convenience and Petroleum Marketers Association (ACAPMA), told Daily Mail Australia that retailers have been factoring in the possibility of restricted supply if the situation between Russia and Ukraine deteriorates.

‘I can’t remember a time in 50 or 60 years of market operation post-war where we’ve had uncertainty like this,’ Mr McKenzie said.

‘If you had a conflict between Russia and Ukraine it potentially means that the economy is distracted and oil may not flow,’ Mr McKenzie said.

‘It’s such a significant volume that unless demand falls, which it won’t, then you’ll get a significant challenge in terms of availability of supply.’ 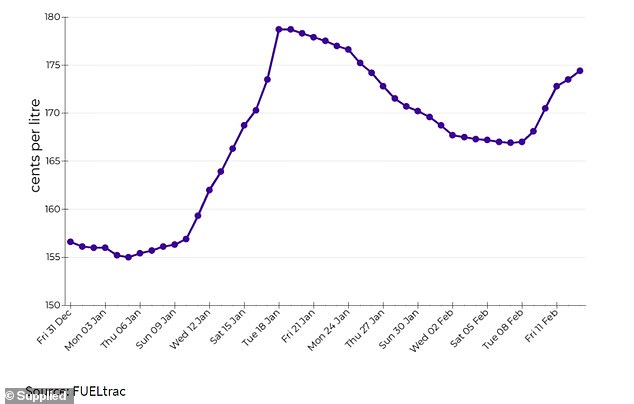 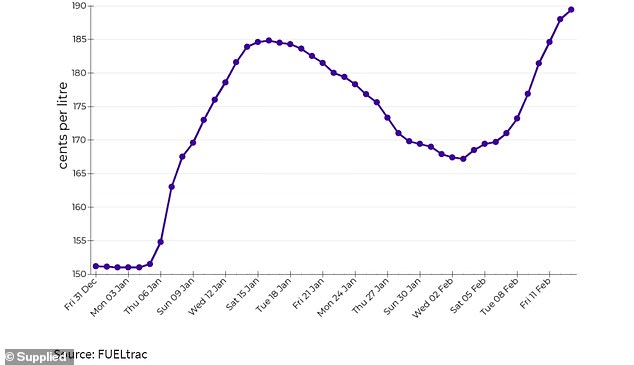 The rise in average Brisbane petrol prices since the start of this year, from around 150c per litre on December 31 to nearly 190c a litre in mid-February

From April 2020 to October 2021, wholesale prices for fuel rose a dramatic 96 per cent as countries began to recover from the sudden drop in demand caused by the Covid pandemic.

Since January 1, fears of a war between Russia and Ukraine has caused the wholesale price to rise another 17 per cent, Mr McKenzie said, resulting in Australia’s current record prices at the bowser.

Should a European war eventuate, Mr McKenzie said it was unclear how price and supply in Australia would be affected.

‘We’re operating in a global fuel market which is totally unfamiliar. We’re coming out of two years of a pandemic, which has already increased our prices, and now we’re seeing a significant risk of a conflict in Europe involving the second biggest producer of oil.’

If the Russia-Ukraine situation is resolved diplomatically, Mr McKenzie said he would expect fuel prices to eventually return to the normal capital city 4-5 week price cycle Australians have become accustomed to, in which discounting is followed by price rises.

‘If you were to isolate the [price rise] effect of the past eight weeks it is almost entirely attributable to the risk of conflict. 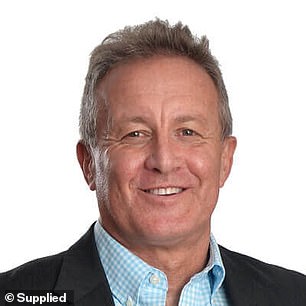 ‘The counterfactual is that is if that risk disappears, the market will price in a lower risk.

‘That’s a global market decision so once that happens, it takes about two weeks to flow through to the wholesale price we pay in Australia.’

Australia’s exchange rate, with an Aussie dollar currently worth around US 71 cents, is adding to the expense for fuel retailers in maintaining supply.

December’s Consumer Price Index released by the Australian Bureau of Statistics revealed higher fuel prices are one explanation for rising inflation in Australia, with a 6.6 per cent rise in fuel over the quarter and a 3.5 per cent rise in the cost of a typical basket of goods.

The inflationary danger is that higher fuel prices are usually passed on to consumers in the form of higher prices for good and services by manufacturers and retailers.

‘We have no petrol, we have two or three days supply,’ he claimed. ‘The answer to that from the government, for which they will be forever laughed and shamed, is to put tankers in the United States.’

Mr Katter was referring to Australia’s announcement in March 2020 to lease space in the US Strategic Petroleum Reserve (SPR) to store and access Australian-owned oil during a global emergency.

Mr Katter noted that world wars had previously started over conflicts about oil.

There are also fears a potential Russia-Ukraine conflict will drive up global wheat prices by 50 per cent.

The two countries account for about one-third of grains and oil seeds traded globally, which means any disruption to shipping caused by conflict and sanctions would send ripples through the market, including Australia.

Matthew Madden, a grains farmer in NSW, said while farmers were watching the Ukraine situation closely, it would not necessarily impact his own plans about which crops to sew.

‘From a personal perspective I don’t want war to drive up prices,’ Mr Madden said.

‘You might get a sugar hit but it doesn’t tend to end well.’

Unleaded prices per litre as of February 14:

Extracted in full from: Why petrol prices in Australia are increasing | Daily Mail Onlinehigh fuel