Demand for electric and hybrid vehicles is at an all-time high. Why aren’t more on the roads?

Demand for electric and hybrid vehicles in Australia is at the highest level it has ever been.

Data released by the Electric Vehicle Council in January showed sales of electric vehicles (EVs) in 2021 tripled to about two per cent of all cars purchased, compared to 2020.

Hybrids have also become more popular in the last year with conventional models (HEVs) making up seven per cent of all new cars, SUVs, utes and vans bought in Australia in 2021 — an increase of 20.3 per cent on 2020.

All of this comes the cost of petrol on Monday exceeded $2.20 a litre in some suburban areas and more than $3 in the regions, and the Australian Competition and Consumer Commission’s (ACCC) latest petrol monitoring report showed February prices in Australia’s five largest cities had risen to an eight-year high.

Head of policy at the Electric Vehicle Council, Jake Whitehead, told SBS News that despite the increase, Australia is still “a number of years behind” most comparable countries.

Dr Whitehead said the average uptake of EVs worldwide is four times Australia’s rate, which is about eight per cent.

“A great example of a comparable market is the UK. They have a similar quality of life, similar average incomes, they’re a right-hand drive market and they have more than 160 electric vehicle models,” he said.

“In Australia, we have less than a third of that; the key difference being they have what is also a conservative government, but a conservative national government that has embraced electric vehicle technology, and is doing everything it can to drive that transition as quickly as possible.”

Why has Australia’s uptake of EVs been so slow?

Australia’s slow uptake of EVs can largely be attributed to federal government policy and messaging, Professor Paul Burke, head of the Arndt-Corden Department of Economics at ANU, told SBS News.

“A few years ago, there was some division of electric vehicles. That’s the opposite of what we would want,” he said.

The federal government announced its Future Fuels and Vehicles Strategy last November, with an additional $250 million towards supporting the use of EVs.

But with the majority of the funding allocated to charging infrastructure, Dr Whitehead said the policy doesn’t address one of the most prohibitive measures for many.

“It’s important that there are national incentives to bring down the upfront cost of EVs. That’s critical,” Dr Whitehead said.

Professor Burke said if the transition continues at the current rate, it will be a long time before EVs make up 50 per cent of vehicles sold in Australia.

“It will take a long time for our stock of vehicles to become majority electric, but we will be on track for that over coming decades,” he said.

“This is the technology for now and the future and a strong policy message that this is where the Australian market will be going would be useful.”

What are the states and territories doing?

Rates of EV uptake in the ACT are the highest in the country — 5.87 per cent of all new cars purchased in the ACT in 2021 were EVs.

Dr Whitehead said the ACT government also has the most generous EV policy in the country.

The government has waived stamp duty and registration fees, as well as offering a 10-year interest-free loan of up to $15,000.

“The really great thing about that is that on average, an electric vehicle in the kind of mass-market is around $15,000 more,” Dr Whitehead said.

“So it’s effectively bringing down the cost of an electric vehicle to be on parity with an equivalent petrol diesel vehicle.”

The NSW government also offers a waiver on stamp duty, along with a $3,000 rebate on the purchase price of EVs with a dutiable value of less than $68,750.

Queensland on Tuesday announced it would provide a $3,000 subsidy

South Australians who buy eligible new battery-electric and hydrogen fuel cell vehicles can also apply for a $3,000 subsidy, as well as a three-year registration exemption.

While Victoria also offers a $3,000 rebate on eligible EV purchases, Dr Whitehead said the implementation of road user charge means the saving is really only about half that.

Will rising fuel prices speed up the transition?

Director of content and editor-in-chief at carsales.com.au, Mike Sinclair, told SBS News there has been a surge in searches for electric vehicles on the site since the beginning of the year.

He said the monthly search share for EVs increased to 14.14 per cent in March, peaking at almost one in five searches on 13 March.

“Higher fuel prices we’ve seen around the world encourage people to switch to more fuel-efficient vehicles and additional uptake of hybrid and electric vehicles,” he said.

“The key reason is the big savings that you have relative to a conventional vehicle.”

That saving is around $2,000 per year, senior lecturer in strategic studies at Deakin University, Dr Vlado Vivoda, told SBS News.

“High petrol prices are a really ideal time to consider switching and promoting alternative technologies and energy sources because it really makes sense economically,” he said.

“I think it’s good that we are having a bit of a national kind of discussion and a bit of a wake-up call here to kind of assess where to go forward.”

Professor Burke said in the short-term, a 10 per cent increase in petrol prices causes around a one per cent drop in petrol use. 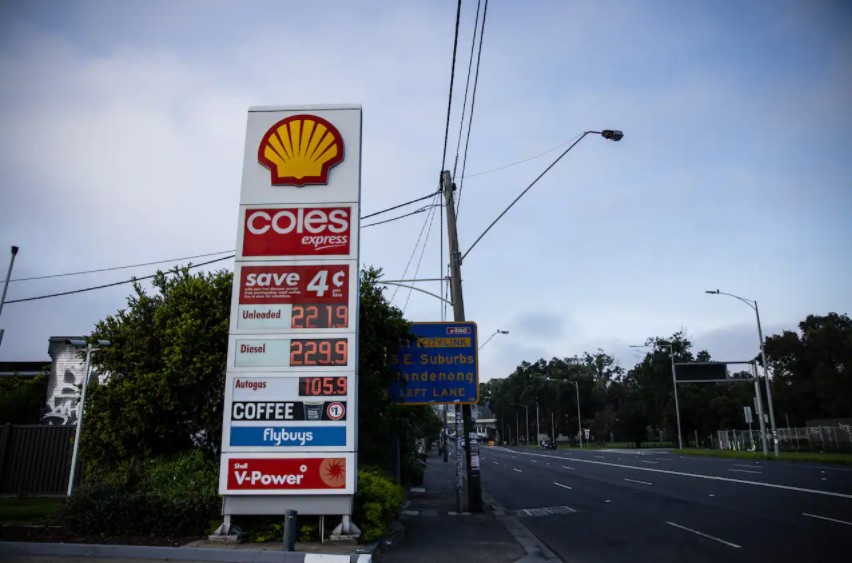 Fuel prices are listed on a board at a service station in Melbourne on 13 March. Source: AAP / DIEGO FEDELE/AAPIMAGE

In the longer-term, the same price increase would typically result in a three per cent reduction in petrol use, he said.

“Future oil prices are difficult to predict, but the very low prices that we saw at the start of the pandemic are not likely to come back over the coming months,” he said.

“So people are starting to need to adjust to this new reality of higher fuel prices.”

What is needed to encourage wider EV uptake?

Despite many Australians’ willingness to transition to low and no emissions vehicles, Professor Burke said it’s simply unaffordable for many.

He said along with federal, state and territory governments introducing rebates to make EVs cheaper to buy, and investing in charging infrastructure, they should also make sure their own fleets are “100 per cent electric”.

“That’s one way to help things because government vehicles typically end up in the second-hand vehicle market,” he said.

“The whole process will take time and efforts to hurry it up now will mean that these vehicles are more generally available for everyone.”

He said the removal of the five per cent import tariff placed on some electric vehicles and bicycles would also help.

“If we want Australian households and businesses to have actual choice to move away from their dependency on imported fuel, to Australian-made energy, we need to have some form of a fuel-efficiency standard, or a sales target, combined with significant incentives, to be able to encourage those models into the country.”

Extracted in full from: Demand for electric and hybrid vehicles is at an all-time high. Why aren’t more on the roads? (sbs.com.au)