Motorists have been urged to use petrol pricing apps to find the cheapest fuel as some stations move early to pass on the fuel excise discount.

petrol prices are about as low as they are going to go in the current environment with the industry moving rapidly to pass on the fuel excise cut, the peak group for service stations says.

Motorists are also being urged to shop around as a gulf opens up between the lowest and highest priced petrol as some stations move early to pass on the fuel excise discount in order to grab market share.

Melbourne unleaded petrol was averaging about 186.2c a litre on Thursday, against a seven-day average of 218.7c a litre for the week to Monday, data from MotorMouth shows.

“You’ve seen a 31c drop in the average price effectively in the past 48 hours – most of that due to the 22c a litre excise but we have also seen oil prices have come off a bit,” he said.

“You are going to continue to see the price cycle discount continue to operate, you are going to see prices bounce around but I think the vast majority of price drops that we have seen have come through. We were talking about $2.20 a litre fuel pretty much last week – now we are around $1.85 so most of it has already come through.”

Mr McKenzie said fuel prices were being driven by service stations which have received new fuel supplies passing on the government’s excise discount while other stations were working through older stock which had been bought at the higher excise price.

Many stations hold five to seven days of fuel stock.

“Expect to see maximum volatility and variance over the next five to seven days,” Mr McKenzie said.

“Use the price apps because you are going to see major differences as servos push through their higher priced fuel or decide to take a loss to protect their volumes.”

Experts warn it will be difficult to ensure the $3bn discount is passed on to motorists and not swallowed up by retailers and rising inflation.

Labor waved through Josh Frydenberg’s cost of living relief package — also including $250 cash payments for pensioners and $420 tax refunds for 10 million workers — on Wednesday as both sides vowed the fuel excise cut would not last longer than six months.

Labor leader Anthony Albanese, who will deliver his budget reply on Thursday night, declared the Treasurer’s budget had “all the sincerity of a fake tan and will last just as long”.

But Scott Morrison denied the $8.6bn cash splash was a bribe for the election, which he is due to call within days after indicating it would be held on May 14.

“We’ve got to give Australians a shield against these cost of living pressures that could frustrate and break up the momentum that the economy is building,” the Prime Minister said.

After Mr Frydenberg announced the fuel excise would be halved to 22 cents a litre on Tuesday night, Viva Energy’s Shell Coles Express service stations dropped their prices by 10 cents a litre on Wednesday.

“We are committed to passing through the full fuel excise reduction as we replenish fuel stocks in our service station network,” Viva consumer executive general manager Megan Foster said. 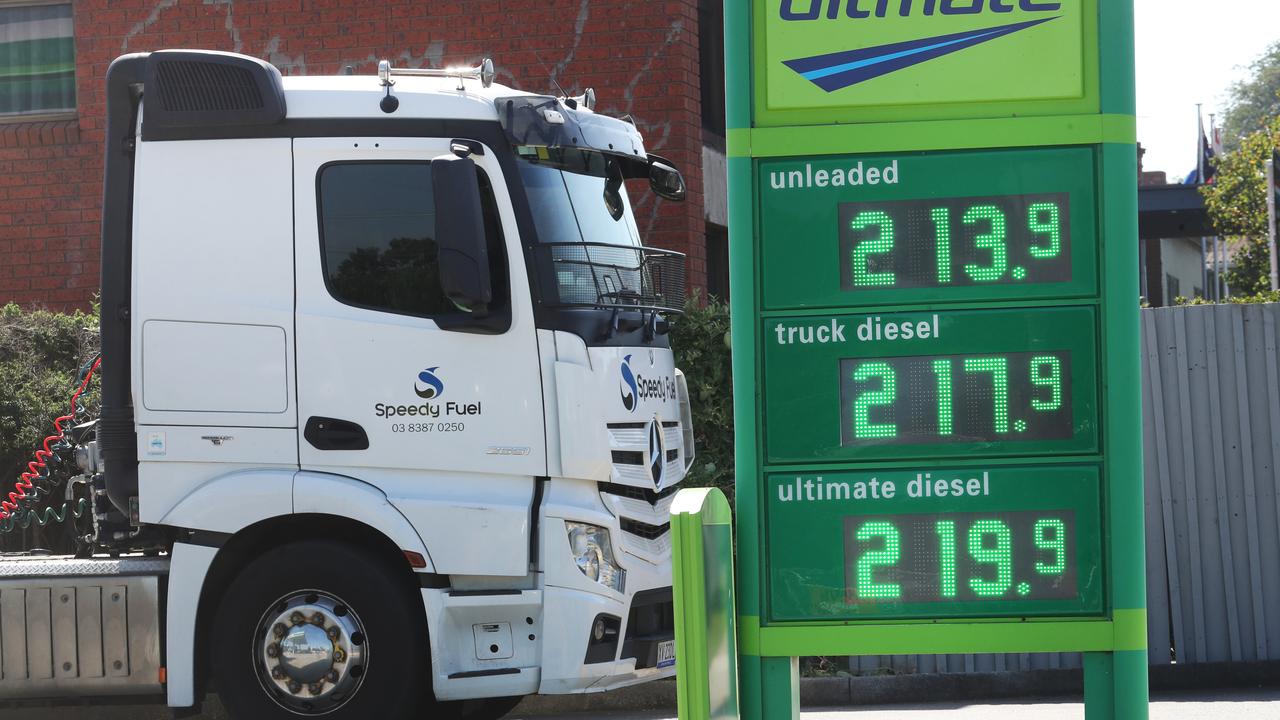 Fuel prices in Victoria have gone up and truckies are among those struggling with prices. Picture: David Crosling

The consumer watchdog put retailers on notice, declaring they expected the cut to be passed on “as soon as possible” and threatened “appropriate enforcement action” if false or misleading statements were made to motorists.

“We will contact petrol retailers to set out our clear expectations that the savings are passed on to consumers and advise them that we will be monitoring their margins,” Australian

Australian Automobile Association boss Michael Bradley called on the watchdog to ensure the price relief was “not simply swallowed by fuel retailers, as the experience overseas is that retailers are pocketing the profits and motorists continue to miss out”.

Infrastructure Partnerships Australia chief Adrian Dwyer said the cut — expected to save drivers $11 on an average tank — would make “sod all difference at the bowser”.

“With volatile prices, any cut you make to fuel excise is likely to be chewed up in the next price rise at the pumps,” he said.

Australian Council of Social Service chief Cassandra Goldie said Tuesday’s budget was “full of temporary fixes when we need permanent solutions”, and that the excise cut would have been better spent on increased income support for job seekers and more affordable housing. 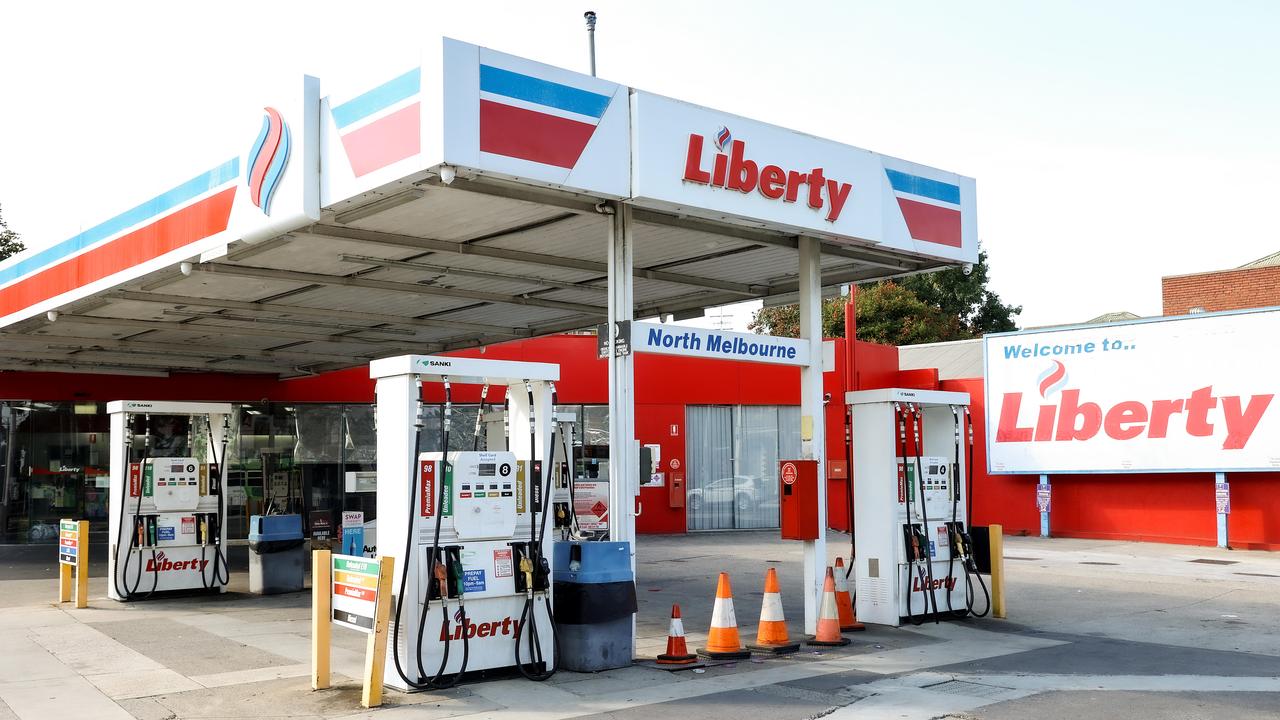 Petrol prices continue to rise across Australia and the world after Russia’s invasion of Ukraine. Picture: Ian Currie

Mr Albanese said he would use his budget reply to outline a long-term plan to lift wages, building on the opposition’s policies for universal childcare, extra social housing, cheaper power prices and solutions to workforce casualisation and wage theft.

He accused Mr Morrison of having “just discovered that cost of living pressures are real”.

“They may as well be handing out cash stapled to how-to-votes,” Mr Albanese said.

Mr Morrison hit back at those criticisms, saying the government was “letting Australians keep more of what they earn by not paying as high an excise at the bowser, and the income tax cut is the same”.

The Prime Minister said it “won’t be long” until he called the election.

“I’ll tell you what, at that election, Australians will have a very important choice. A choice about who is best able to continue to keep our economy strong for a stronger future. Who can defend our country, who’s been prepared to stand up, who has the clear plans,” Mr Morrison said.

Extracted in full from: Petrol prices: Motorists urged to shop around as some stations move early to pass on fuel excise discount | Herald Sun