Fuel security gets a hearing as Woodside prepares to expand

Woodside CEO Meg O’Neill has left her base in Perth to spend a good couple of weeks in Sydney and Melbourne.

By July 1, once the planned merger with BHP Petroleum is done, O’Neill will be running a top 10 listed Australian business with gas assets both in the northwest and on the east coast of Australia, oil in Bass Strait with high cashflow and more in the Gulf of Mexico.

East coast investors are ­suddenly more attuned to her message of not just gas security, but oil too.

An energy crisis in Europe heightened by the shocking ­conflict in Ukraine over the past fortnight has the market focused on short-term threats and ­opportunity.

But for the Woodside CEO, these events have far larger ­implications for long-term energy security in the West and particularly for Asian customers.

O’Neill is moving ahead with the Scarborough gas project, but she says the war puts development of a number of other resources in a different light.

“When we talk to our customers, it is the same as any household. You want affordable energy, you want lower-carbon energy but importantly you want reliable energy,” she says.

“Ukraine is spotlighting the value of natural gas resources from places like Australia with a stable government, democratic regime and a belief in the global trade system.” 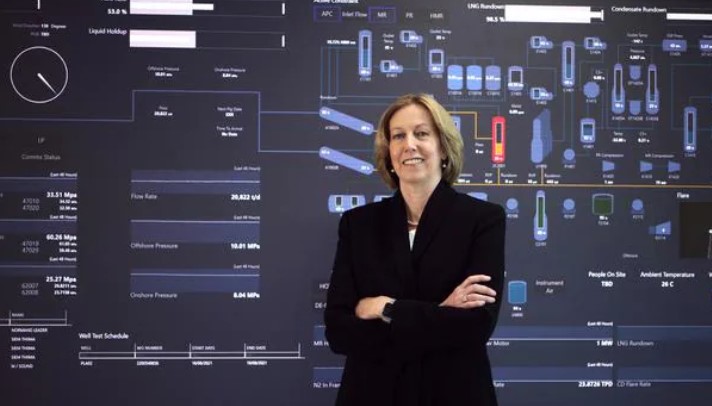 Woodside CEO Meg O’Neill, above, says ‘the government does recognise that energy security is important for Australians as well’. Picture: Woodside via NCA NewsWire

O’Neill says stakeholders need to look through the short term. Woodside’s investments made today will be producing for over 20 years.

Even before the tight market in Europe developed, Woodside decided to move ahead with the $16.5bn Scarborough gas project. It saw a multi-year opportunity in Asia’s growth, particularly China, and at the same time the need for Asia to move away from coal.

“Japan is net zero 2050, China 2060. When we look at their energy mix today, they are going to need gas to have a smooth transition down that pathway to a lower carbon future,” she says.

Woodside’s $41bn scrip merger with BHP Petroleum brings the company back to its roots in oil in Bass Strait.

The company was founded in 1954 and named after the Victorian town of Woodside, which was close to its oil leases. In 1956 it secured its first offshore exploration just a few kilometres off 90 Mile Beach.

The oil that Woodside has access to after the merger is a vast, mature, high-flowing resource. It will take the company from an 80/20 gas/oil mix to 70/30.

For Australia there is an important security question not yet front of mind: what is the risk is of moving to a fully green energy grid of solar, wind and hydro, backed by batteries? And what might happen to transport, for example, if that grid were suddenly compromised?

Asked if she was having new discussions with the government about security in both oil and gas, O’Neill says: “It’s probably too early to say. Nothing yet, but it’s only been two weeks since the invasion happened.

“Obviously the government does recognise that energy security is important for Australians as well and most of the liquid product is important.

“I think there is an opportunity for energy producers like ourselves to participate in a longer term conversation about how does Australia get a bit more energy security.”

In the near-term Woodside is strongly positioned.

Its share price has risen 40 per cent this year due to the company’s exposure to the gas spot price just as the market crunches.

O’Neill says between 20 and 25 per cent of LNG production in 2022 will be sold at spot, either because it is not contracted or it is contracted against price indices. And there are more contracts rolling off for both Woodside and BHP Petroleum.

The merger will give Woodside a position in the east coast gas market with largely fixed prices. Oil, particularly in the Gulf of Mexico, is almost all spot.

The merger is a chance for O’Neill to dramatically refresh Woodside’s leadership team with some of BHP’s global expertise.

New chief financial officer Graham Tiver has already moved across to Woodside after almost 30 years at BHP and WMC ­Resources.

Post-merger, other nominated executives from BHP include Shiva McMahon to lead international operations, Andy Drummond to lead exploration and development and Matthew Ridolfi to lead projects, all based in Houston. Tony Cudmore, who runs BHP’s group sustainability and public policy, will lead strategy and climate from Perth.

Like other Australian oil and gas leaders, O’Neill is sceptical of the amount of immediate energy support Australia can offer Europe.

“I know there has been discussion in the media about (whether) Australia can help Europe. The trade flows aren’t really practical. There are the occasional Australian cargoes that do make their way to Europe but they are the exception rather the rule. The transportation costs just make it uneconomic,” she says.

Almost all of Woodside’s LNG spot trading will go to Asia.

The anger at Russia has put Japan in clear and present danger on gas security. Japan buys between 20 and 25 per cent of Russia’s LNG exports. At the moment, it has not announced a withdrawal of investment in Russia’s Sakhalin project as Western gas giants ExxonMobil and Shell have done. O’Neill points to the difference in short and long term strategies. Short term, she says, nations are trying to balance the sanctions put on Russia with the pain their own citizens might feel.

“The US is sanctioning oil and gas and coal immediately and the UK is saying the sanctions will kick in at the end of the year.

“The US is getting very little energy from Russia today; it’s very easy for them to say we won’t take any. For the UK it is a more complicated problem,” she says.

“What the Japanese do in the short term is a little hard for me to say. Long term I think Japan will be looking to the question of where should they get their ­energy from and they will be leaning more towards countries like Australia.”

Extracted in full from: Fuel security gets a hearing as Woodside prepares to expand (theaustralian.com.au)