In May 2021, the national consulting firm Ernst & Young (EY) was commissioned by the Australian Department of Industry, Science, Energy and Resources (DISER) to model Australia’s future transport fuel use to 2050. The purpose of the work was to provide a perspective on the likely rate of market adoption of alternative ‘future fuels’ – such as electricity and hydrogen – within the Australian Transport Sector (i.e. Road, Rail, Marine and Air).

This work was substantial and follows on from work previously completed by the Australian Government a decade earlier – under the banner of the 2012 National Alternative Fuels Strategy.

“This work was not only of interest to ACAPMA but also to me personally, given that I had been one of the contributing authors to the 2012 alternative fuels research in my former consulting life” said ACAPMA CEO Mark McKenzie.

This latest study was conducted over a ten month period. The work involved extensive research, stakeholder consultations and economic modelling. In all, EY consulted a total of 13 national organisations in respect of the assumptions used in the modelling and the subsequent preliminary outcomes of the research. These organisations, whose members have significant (and often conflicting) interests in the Australian alternative fuels agenda, included:

Given the significant role that electricity is likely to play in the transport sector over the next 20-30 years, the modelling work was developed around four different scenarios of market adoption devised by the Australian Energy Market Operator (AEMO). The first scenario involved a ‘slow’ rate of adoption with subsequent scenarios pointing to faster adoption of alternative fuel technologies relative to a ‘Central’ or baseline market adoption scenario (see chart below). 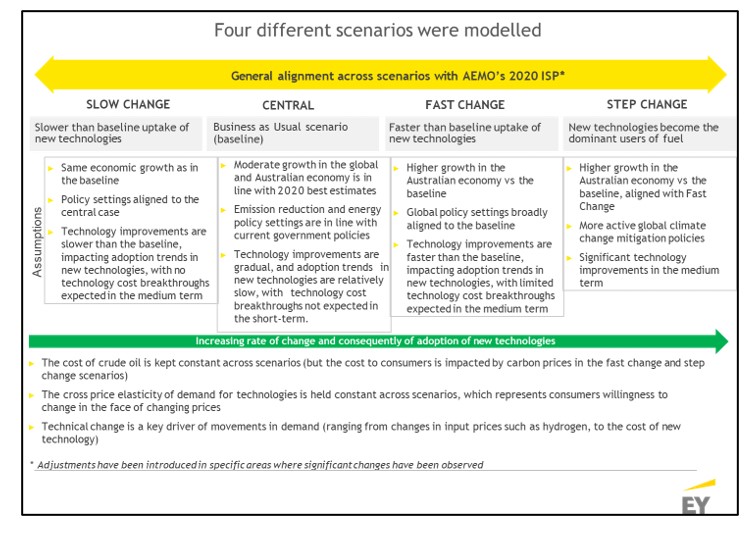 The assumptions were then used to prepare an estimate of the likely rate of increased demand of ‘future fuels’ – and a corresponding reduction in demand for conventional liquid fuels – for each of the four scenarios.

“The results reveal some interesting insights about the likely take-up of electric vehicles with the modelling suggesting that EVs are unlikely to have a marked impact on conventional fuel demand in the road transport sector between now and 2030. In fact, total demand for conventional fuels is expected to increase as air travel recovers from the COVID-19 downturn”, said Mark. 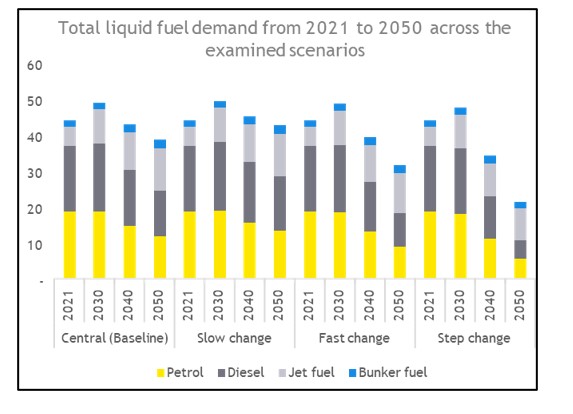 Beyond 2030, the study suggests that Australia will likely experience a marked downturn in total demand for conventional fuels in subsequent decades. The projected declines are estimated at between 9% (‘Slow’ scenario) and 60% (‘Step change’ scenario) on 2030 forecast levels – the vast majority of this due to the penetration of cleaner cars and trucks (as opposed to rail, ships and aircraft) in the national vehicle fleet.

“Even if the fastest scenario was realised, it appears that the service station industry – and indeed the wider conventional fuels industry – has significant time to invest and adapt their business models to provide a mix of mobile energy sources (i.e. conventional fuels, EVs and Hydrogen) over the next 15 to 20 years”, said Mark

The study also reveals that the majority of replacement of ‘fuel’ for passenger vehicles for all scenarios is likely to be electric power for EVs with smaller contributions from Fuel Cell Electric (FCEVs or Hydrogen vehicles) and biofuels. 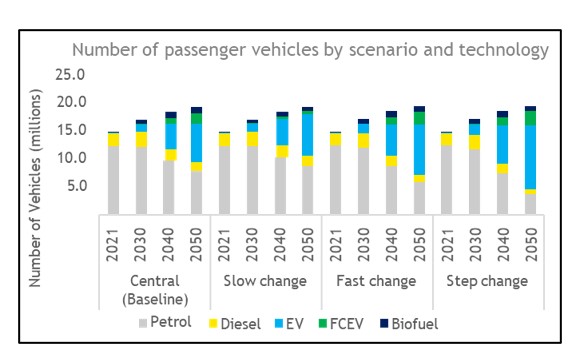 “It is worth noting that while this sort of work is very robust, it is a forecast that is being used to inform government policy and should not be solely relied upon for investment purposes”, said Mark.

“Nonetheless, the report is quite balanced in what is currently a highly charged and contentious debate and the findings of the study signal the need for our industry to consider how best to invest in future fuels infrastructure (i.e. EV Charging) and Hydrogen infrastructure now”, concluded Mark

A copy of the slides relating to this study, as recently presented to ACAPMA can be accessed via the following link: https://acapma.com.au/wp-content/uploads/2022/03/Future-Fuel-Opportunities-in-Australia.pdf

It should be noted that the slides are ‘confidential’ to ACAPMA and its’ members. The scenarios presented in this project may differ from other scenario modelling, partly due to assumptions regarding technological improvement. Scenarios reflect a range of economic and market conditions and do not necessarily reflect current Australian Government policy.

For its part, ACAPMA will continue to work with all Australian Governments to explore policies and programs supporting early investment in clean fuel infrastructure by the conventional fuels industry.