A man who went hunting for his stolen car wearing only shorts and sunglasses has been hit by the vehicle as the thieves escaped from a Gold Coast service station.

The 50-year-old man didn’t report the white VW Golf being stolen from his Southport home in the early hours of Wednesday morning.

Instead, he drove around looking for it before spotting it in the car park of the service station in the same suburb about 3am.

It’s believed he attempted to box the stolen car in before getting out to confront the suspected thieves.

They then tried to drive around him but knocked him down in the process.

CCTV footage obtained by 7NEWS shows the victim having another go at stopping the thieves by trying to open the car door as it drove off.

He was unsuccessful and the offenders escaped in the Golf. 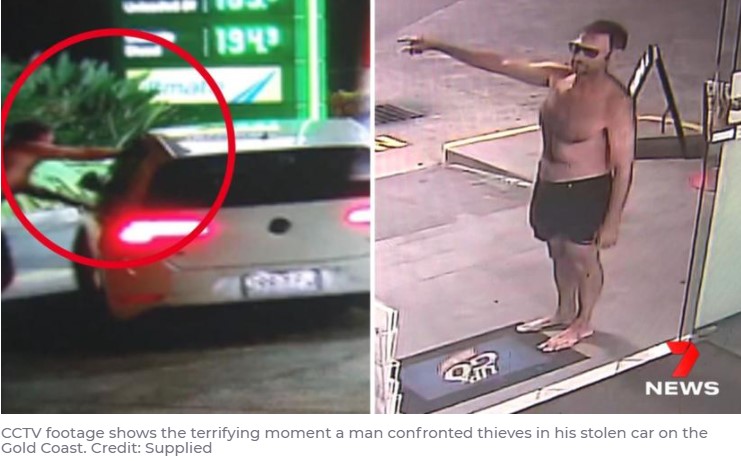 The car owner sought help from staff members and was treated by paramedics at the scene for an injury to his head, a gash on leg and cuts and bruises.

He was then transported in a stable condition to the Gold Coast University Hospital for treatment.

The car and the thieves had not been located by midday on Wednesday.

It has the registration plate 399 YPJ.

Extracted in full from: Gold Coast man run over after hunting down and confronting car thieves at service station | 7NEWS